Tommaso Dorigo
The following is a guest post by David Orban, CEO at Dotsub, faculty and advisor at Singularity University, and trustee of Network Society Research.

When I implanted an NFC chip in my left hand about two months ago at the Singularity University Summit Europe in Amsterdam, I followed the tradition of our species that a hundred thousand years or more ago decided to become a cyborg.

The NFC chip, sold through the aptly named Dangerous Things website, is embedded in a glass vial and is injected under the skin between the thumb and the index finger, safely lodged in plenty of shock absorbing tissue. The operation, performed by Tom Hannes of Piercing Utrecht, was fast, and not too painful. 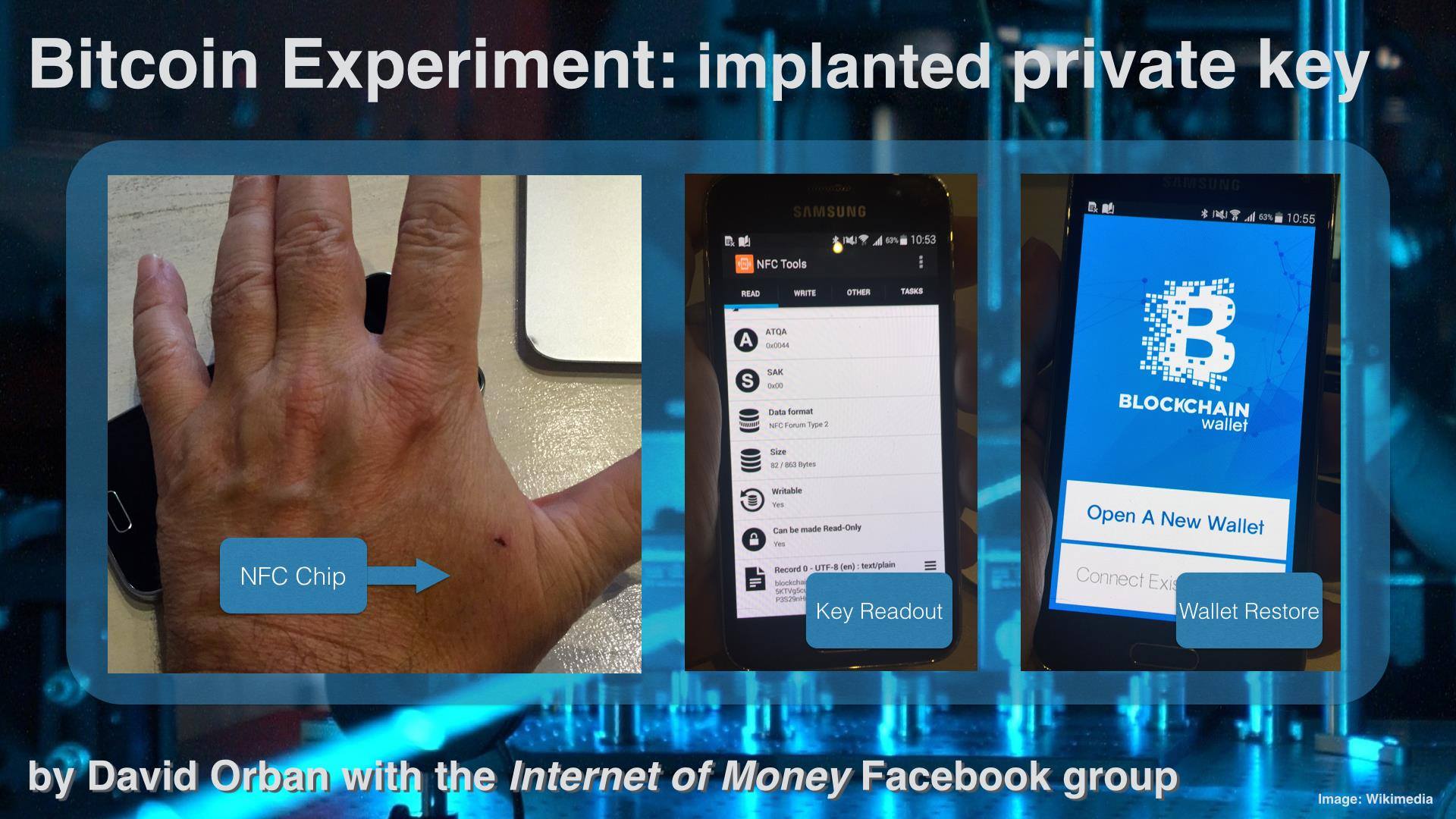 Technology has been with humans for a long time. Not only agriculture that accelerated our civilization’s evolution stopping our hunter-gatherer nomadic lifestyle ten thousand years ago. But the use of fire, which has provided us with a technology-based digestion process external to our stomachs, allowing us to spend less time to absorb more useful energy to feed our hungry brains.

When people talk about their latest phones, or their wearables, I have the opportunity to mention the implant to them. The most shocking moment comes when they touch my hand, and they can actually feel the rice grain-sized chip under the skin. Most of the people are physically revolted by it, and all of them are rather astonished.

The first goal of getting the implant, which today is worn by a pretty small number of people is achieved through this: to open the conversation about these technologies, and breaking down the social barrier to their adoption.

We have been accustomed to restorative implants for over fifty years, since the first pacemakers, and nobody would dream of saying that somebody should rather die than getting one. On the other hand, augmentative interventions appear to be more controversial, and people often make reference to fairness, and level playing fields, when confronted with the possibility that others in their peer group could rely on physical or cognitive augmentation to achieve their personal or business goals.

Luckily we have been able to arrive to positive conclusions in these conversations in the past already. Yes, we have glasses to restore our vision if we have a defect in our eyesight, but we also have binoculars, and telescopes that greatly extend the range and acuity of our unenhanced vision.

An other reason to get implanted for me was to experiment first-hand with technology in general, and with that of the NFC implants in particular. An important difference between previous RFID chips is that those only had a serial number in them, that could not be changed, while the NFC chip can also hold other information in its memory, it is writable, and can be used for different applications: identification, access control, transactions are some of the applications that are possible already today.

Currently I am keeping the private keys of my Bitcoin wallet on the chip, as an example application.

What is the best way to manage Bitcoin wallets? We don’t know yet, as all the reflexes that we have towards traditional money don’t apply, and the new ones have not developed yet. That is why experimenting with different ways of using wallets, and dynamically adjust the balance between convenience and security is important.

Exporting the private key of a Blockchain wallet, "5KTVg5…", writing it on the implant, and then restoring the wallet from the private key, are the current cumbersome steps that certainly are going to get easier with software supporting better and smoother experiences.

This is just one of the applications of the implant which is not approved for human use at this time, and very few people have it. But those who are ready to experiment, are trailblazing for billions of others following with applications that are going to be designing the contours of the future.

Published under CC BY