Tommaso Dorigo
The mystery of what clumps galaxy clusters together, and provides for a quarter of the matter-energy budget of the universe, really looks like _the_ most important scientific question we face today. There is nowadays compelling evidence of the correctness of the standard cosmological model, coming from the cosmic microwave background maps provided lastly by Planck as well as from a number of other observations - of supernovae, galaxy clusters, galaxy rotation curves, etcetera. So we know there has to be dark matter out there. But what is it?

10 years ago many of my colleagues, experimental physicists from ATLAS and CMS, looked totally sold out to the idea that they would find the answer by smashing protons against protons at the LHC. Indeed, for a while it looked like the "cosmic coincidence" was too strong an argument to be false. A stable, massive neutral particle produced copiously by the Big Bang would still be around today, and its abundance would match the missing matter budget of the universe if its mass were in the few 100-GeV ballpark; such a particle would automatically have the right couplings (to be produced in the required abundance) for a neutralino, the lightest SUSY particle.

But SUSY has not shown up at the LHC. With the 2016 collisions acquired by ATLAS and CMS we will put even stronger bounds on Supersymmetry, but already what we did this far makes SUSY a less-than-likely hypothesis - most of the simplest theory instantiations have been wiped off the board by direct searches, and what remains are uglier versions of the theory, less attractive and "fine-tuned". Beware - SUSY might still be _the_ correct theory, and we might still find it. But that would be more of a surprise now than it looked 10 years ago.

So what is dark matter ? Is it primordial black holes ? The LIGO-VIRGO discovery of 30-solar-mass mergers has revived this question because such intermediate-mass black holes were thought to be less abundant in the universe. I am not an expert so I am unable to assess critically this question, but experts say it is a unlikely explanation, for a few good reasons.

A paper that appeared on the arxiv a few days ago offers a very different solution to the question. The article, titled "On the hypothesis that cosmological dark matter is composed of ultra-light bosons", is authored by Hui, Ostriker, Tremaine and Witten, and it deserves a lot of attention -of course, anything Witten writes does; but this paper is also quite readable, as opposed to many string theory works which remain inscrutable to most of us. The authors take in consideration a hypothesis that is not new, and study it in detail, coming to several interesting conclusions.

The idea is called "FDM", for "fuzzy dark matter". It posits that an extremely light boson, one almost exactly massless in fact, could be responsible for the scale of galaxy halos we observe in the universe. A particle with a mass in the 10^-22 eV range would have a de Broglie wavelength of a kiloparsec or so. Its abundant presence in the universe would form halos only larger than a certain scale, at variance with what could be predicted in the cold-dark-matter model.

The authors consider the particle physics motivations for such a light boson, and point out many consequences of its existence, crucially indicating how the model could be falsified or proven by experimental investigations. In particular, the FDM would create a stationary core in the halo, a sort of soliton, which would have a distinct signature in the rotational curves of galaxies. 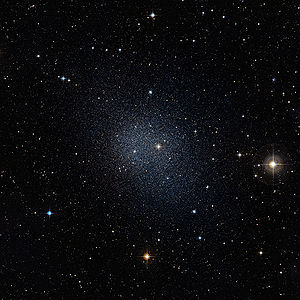 Another point made already in the abstract of the paper is that the Fornax dwarf galaxy (see picture, right) seems to have globular clusters that could not be there if the dark matter in that galaxy was of the "ordinary" kind predicted by the CDM paradigm; the FDM solution would thus "explain" the existence of this peculiar system better.

I will stop here my reporting of this important new paper, as I prefer to spend my time trying to understand it rather than reporting it without having yet read it in full... But of course, if you are interested in this exceedingly important mystery, you should certainly want to follow my example!
A Quantum Diaries Survivor
More Articles All Articles
About