Imagine a world where the major source of human nutrition was beer. That may sound fantastic to some of you, but now imagine that, in this beer-world, there are no bottle openers and no twist-off caps. To get at the beer, you have to open the bottles with your teeth. Day in, day out, you're opening bottles with your teeth. If the world continued like this for a few thousand generations, how would the human jaw evolve into a better beer bottle opener?

2 million years ago, our ancestors lived in such a world. OK, so it didn't involve beer-bottles, but our ancestors did have to use their teeth to get at what was essentially armored but highly nutritious food - nuts and seeds. That is the conclusion of a group of researchers (in typical modern style, it's a group of 19 scattered all over a variety of institutions, too many to name) who studied the chewing forces that most likely shaped the evolutionary trajectory of the skull of Australopithecus africanus. They found that the Australopithecus skull was reinforced for eating foods in which "a soft, nutritious core is mechanically protected by a hard outer casing." (That sounds a lot like a beer bottle to me.)

To test their ideas about the structural reinforcement of the Australopithecus skull, the researchers compared the fossil skull to data obtained by observing macaques chew. Using a modeling technique called finite element analysis, they estimated the force density (Newtons per square meter, for those of you who remember your Freshman physics) experienced by various regions of the Australopithecus skull when chewing. This is easier said than done with a 2 million-year-old fossil, and to make their model work, they used muscle anatomical data from chimpanzees and force measurements made on chewing macaques. 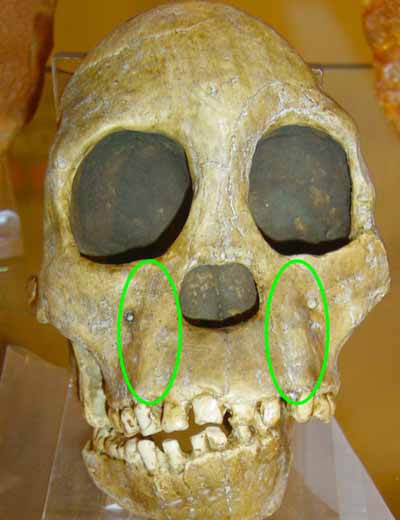 Why bite hard foods with your premolars? (Your two premolar teeth are numbers 4 and 5, counting back from one of your two front incisors, according to Wikipedia - I'm not a dentist.) My face hurts just at the thought of cracking a tough nut in the front of my mouth. The scientists suggest that Australopithecus premolars were great at cracking open hard shells that were too big to fit all the way in the back of the mouth. Thus, like the Galapagos finches' specialized beaks, Australopithecus jaws were specialized for accessing what may have been the most widely available, nutrient-rich food around. These hominids were living during a transition to a cooler, drier climate, and during this transition, environmental conditions were quite variable. It is likely that the Australopiths frequently experienced periods when softer, chewier foods were not so abundant. During these times, the researchers suggest, the selection pressure for nut-cracking jaws might have been strong.

Join me tomorrow, here at Adaptive Complexity, for day 12 of 30 Days of Evolution Blogging. Evolution as a science is alive and well. Each day I will blog about a paper related to evolution published in 2009. Are you a blogger and want to join in? Here's how - follow the link to check out how you can win a complete three volume set of The Life and Letters of Charles Darwin which includes an autobiographical chapter from Sir Charles and was edited by his son Francis Darwin, printed in 1887.
Adaptive Complexity
More Articles All Articles
About