Michael White
When we think of the genetic changes that had to take place during our evolutionary history, we typically think of changes that resulted in a gain of function, like genetic changes that resulted in a larger and more sophisticated brain, improved teeth for our changing prehistoric diet, better bone anatomy for bipedalism, better throat anatomy for speech, and so on. In many cases however, we have lost genes in our evolutionary history, and some of those losses have been beneficial. The most widely known example, found in every introductory biochemistry textbook, is the sickle-cell mutation in hemoglobin - a clear example of a mutation that damages a functional protein yet confers a beneficial effect. People with mutations in both copies of this particular gene are terribly sick, but those who have one good and one bad copy are more resistant to malaria. Another example is the CCR5 gene - people with mutations that damage this gene are more resistant to HIV. In the more distant past, a universal human mutation in a particular muscle gene that results in weaker jaw muscles may have played a role in brain evolution, by removing a constraint on skull dimensions. These few examples were found primarily by luck, but now with the availability of multiple mammalian genome sequences, researchers can systematically search for human genes that show signs of being adaptively lost at some point in our history. David Haussler's group at UC Santa Cruz, in a recent paper, looked for the genes we lost as we developed into our modern-day human species. What they found could help us better understand our evolutionary history, and possibly the human diseases that are the side-effects of that history. It's not hard to find genes that have been lost in the human genome - our genomes are littered with pseudogenes, genes which harbor inactivating mutations making them unable to produce a functional protein. But most of these damaged genes have functional copies elsewhere in the genome. Genes are frequently duplicated in the random shuffling that goes on in our chromosomes, and often the duplicate copy will be destroyed by mutations while the good copy continues to perform its original function. Another frequent phenomenon is the production of processed pseudogenes - these are genes that were produced when RNA was transcribed back into DNA and integrated into the genome. The result is a gene that looks just like a highly processed RNA molecule, often surrounded by the classic genetic residue that is left behind when a piece of DNA is integrated back into the genome. Looking for lost genes Haussler's group was not interested in these two relatively mundane classes of pseudogenes; they were searching for genes that are clearly functional in other mammals, and which have not been duplicated or reverse transcribed from RNA. In other words, the genes they were looking for would have no other functional copies hanging around somewhere else in the genome. Genes in this category are likely to be candidates for adaptive losses - genes whose function has been completely eliminated from the human genome, which may have provided some benefit to the original ancestor in which the gene was lost. These researchers performed their search by comparing functional genes in the mouse genome with genes in the human and dog genomes. Mice are more closely related to humans than dogs are; a gene that is present and functional in mice and dogs, but destroyed by mutation in humans has therefore been present in mammals for a very, very long time, but was recently lost in the human lineage. You can see how this works in the figure below (which I have marked up slightly from the original version in the paper). The mouse and human versions of our hypothetical gene line up nicely, but there is an inactivating mutation in the human version. In the dog version (not shown), that mutation is absent.

What they found After completing their genome scan, and applying various quality control filters, Haussler's group came up with 72 candidate lost genes. They found some well-known lost genes, such as GULO, an enzyme necessary for making vitamin C that was been destroyed in primates, but is still functional in most other mammals. (If we still had a functional copy of this gene, we wouldn't get scurvy.) Thee researchers found new lost genes as well, most of which have poorly characterized functions. One gene, named ACYL3 (NM_177028 in the mouse genome, for those of you who want to check out GenBank), contains a very highly conserved enzyme structure, called an acyltransferase domain (see more here). This particular acyltransferase domain is very ancient - it is found in bacteria, archaea, plants, fungi, and animals. Many species have multiple copies of this domain (the fruitfly has over 30), but mammals have only a few copies, and humans have absolutely no functional copies. We know almost nothing about this gene: it produces a membrane protein, it is expressed in the mouse pituitary gland, and it is necessary for normal embryo development in worms and flies. Why was it lost in humans, and was that loss beneficial? We don't know yet. Do we get some diseases that mice don't get, because we lack this gene? It would be fascinating to figure out. Although we know little about ACYL3, Haussler's group was able to pinpoint the timeframe of the loss. This gene was destroyed by a nonsense mutation, a change from TGG (coding for the amino acid tryptophan) to TGA, which means stop - the protein is truncated right in the middle of a highly conserved region. This TGG to TGA change is found only in chimps and humans, not gorillas, orangutans, or any other mammals checked. The mutation therefore happened after the chimp-human lineage split off from the other great apes. Gorillas and orangutans have a functional ACYL3 gene; humans and chimps don't. 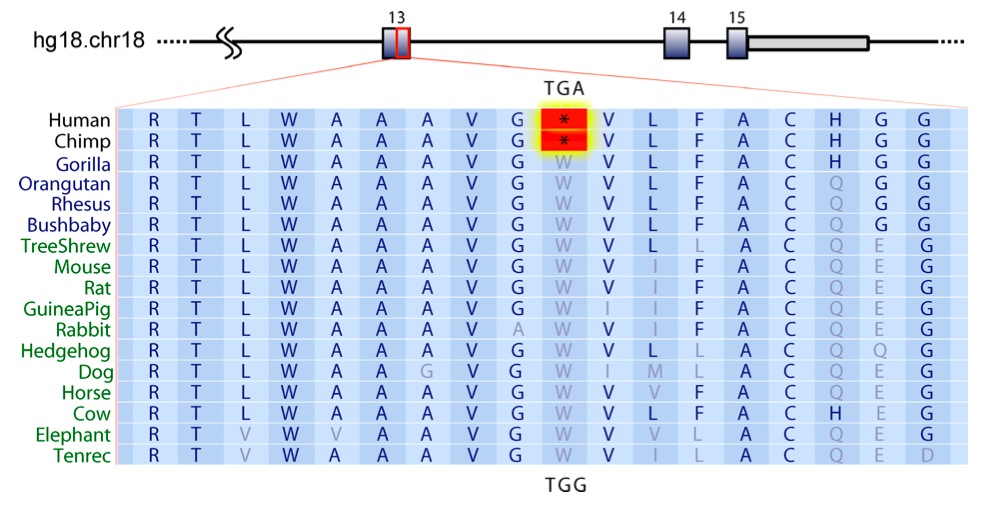 Other lost genes found by these researchers included genes lost in only chimps, gorillas and humans, genes lost in all great apes, and genes lost in primates. Each of these losses is an example of an ancient gene that was functional for hundreds of millions of years, but then lost very recently in the lineage that led to primates, and ultimately humans. Without detailed functional studies in multiple species, it is hard to know which genes were lost adaptively, providing an immediate benefit sustained by natural selection, and which were lost simply because they were no longer necessary in a particular environment (such as the vitamin C biosynthesis enzyme). But with this list of genes in hand, we know where to start. It would be fascinating to figure if any of these lost genes are linked to human diseases (like GULO and scurvy), since the lost function could provide an important clue regarding the mechanism of the disease. It's worth noting the implications of studies like this for the creation-evolution debate. Creationists, including most of the major advocates for its latest form, Intelligent Design, have frequently expressed their disbelief in human evolution and the common ancestry of today's species. In the case of ACYL3, the only plausible explanation for the pattern of mutation that Haussler's group found is that humans and chimps shared a common ancestor. If humans and chimps had been created de novo as separate species, it would an be extremely unlikely coincidence for these identical mutations to occur by chance individually in each species. And when you factor in the distribution of dozens, hundreds, thousands of such mutations, all occurring in a similar pattern, it becomes not just unlikely but essentially impossible that such patterns of mutation would have arisen by chance in each separately created species. One could suggest that a designer just decided to arrange things this way, but that argument falls in the same class as the claim that God just made the universe and the earth appear old, after creating it all 10,000 years ago. There is simply no rationale based on evidence to question the fact of common descent, and those who continue to resist this fact can only do so for religious or psychological reasons. Figures from the original paper were annotated, cropped and posted under the PLoS Open Access License.
Adaptive Complexity
More Articles All Articles
About