If you catch anyone at the right moment, after having experienced something extraordinarily wonderful, joyful, or blissful, and if you ask them if that was a magical moment, they will agree that it was. Take the birth of a baby - few things compare, and any parent would say that a birthday for them was a magical moment in time. The same goes for falling in love, winning the lottery, just knowing something is true without knowing how you know, and so on and so forth. At the same time, nothing flopped in the age of modern media like the traditional magician’s act on stage. Today, performing magic tricks and card tricks ranks up there with pantomime and ventriloquism. Yet, we still reserve the term magical for describing the best things in life. Why? 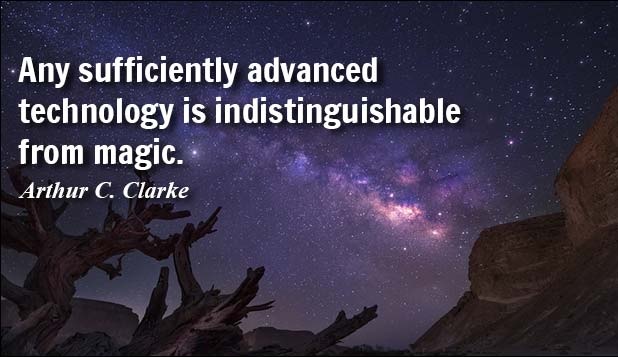 In the ancient world, it used to be impossible to separate philosophy, logic, theory, and knowing the world, from religious/spiritual/magical belief systems. Then, for some reason, the authority defiance syndrome of the Ancient Greeks kicked in, and they decided to try playing the game of  philosophy, logic, theory, and knowing the world, without positing mystical forces, without assuming the existence of God, Goddess, or Gods, without submitting to any ruler’s idea of how it should be done - they wanted to start with no outside rules from any rulers, despots, or Gods. They decided to try playing the game just by using only their own ability to think, observe, and know - and nothing else. That was a truly magical moment in human history. When the Ancient Greeks changed the rules of the game, they created the foundation of assumptions for doing science, as we know it.

The reason for writing about this issue of the interface between magic and science is simply for the sake of reminding that none of this is etched in stone, and the assumptions at the beginning of the game, create the game, but they may not necessarily create Truth forever and all time. When humans, Ancient Greeks, decided to forsake religious/spiritual/magical belief systems as a source for the basic assumptions of their pursuit of knowledge, they sentenced the game of science to the same outcomes as the game of knowledge based on religious/spiritual/magical belief systems. Science today is every bit as political and fragmented as any knowledge system ever was. Thus, we live in an age of science, but there are huge fights between evolutionists and creationists, between climate change believers and climate change deniers.

Ask the people who run the American Council on Science and Health if science is enough to create consensus about what we know. Apparently, when humans invented the possibility of science, we also invented the possibility of pseudo-science. It turns out that even with science as systematic inquiry, even with data gathered and analyzed systematically, there is still enough wiggle room for doubt, denial, and argumentation about many, many things to create chaos and controversy a plenty. Science becomes as political as politics, as emotional as war, and as ephemeral as San Francisco mist.

At the same time, creationists drive cars, use electricity, watch TV, and log onto the internet, allowing science to work for them. The biggest climate change disciples get on their private jets and let science fly them to a world congress on climate change. Witches log online with the help of science and conduct group spell-casting sessions. Everybody uses whatever science that works for them, whenever they please. So, we all know science exists, that it works great, and we use it avidly, yet we also argue incessantly about the nature and interpretations of science, as we see fit. What I am trying to say is that people’s minds still work the same way as they always have, and we still disagree the same way, whether we live in a world of science or not.

In other words, now we have a world of science, but we all know that individuals have it both ways, they will draw close to science in public with undying faith, and then they will go home, light candles, and cast a spell on someone, or chant an affirmation of the law of attraction designed to bring them something they want, with the same kind of faith. They will believe in science with a fervent belief in logic, and then they will turn around and believe in God with an equally fervent belief in faith. At work or school they are scientists, and at home or with friends, they are witches, preachers, satanists, missionaries, and everyday people who read their daily horoscopes, just because …

In other words, though individuals will hardly admit it out loud, in public, for fear of being burned at the stake of public humiliation, everyone harbors their own private mixture of beliefs,some scientific, and some spiritual, or superstitious, or magical. Psychologists write about magical thinking, and tell us that it is when an individual sees a causal link between two events, when none is really there at all. Then they turn around and explain the entire world of mental illness to us, even though they have no laboratory tests to scientifically confirm the existence of even one of their mental illnesses. They tell us they know how to diagnose every mental illness because they have a book - the DSM/ICD - which is the manual of diagnostic standards for diagnosing mental illness and developmental disabilities. Yet, the entire manual of every mental illness they know of keeps growing every time they publish a new version, even though they have absolutely no laboratory tests for confirming or even claiming that any of them exist. In other words, every judgment of every psychologist and psychiatrist about every patient, every therapy, every treatment, and every prescription, is based on wholly subjective judgment calls and no quantifiable science, or laboratory tests, at all.

In fact, decades of studies indicate that you can give ten different white coats a description of one person’s “mental illness” and you can get back ten different diagnoses. In fact, decades of studies show that anyone can fake admission into a mental hospital with the greatest of ease because the white coats running the place have nothing more than their subjective opinions with which to evaluate any individual. In fact, it is unbelievably easy to do, the hard part is getting out. After Rosenhan (1973) did it, to make a point, it became all the rage and dozens of people continued doing it in the 70s and 80s - although each claim to having done it is always followed up by lengthy qualifications, disavowments, and corrections from the white coats. There is a huge literature on it (e.g., Rosenhan, 1973). But, a white coat will tell you that it was a just trick of pseudoscience, every time (e.g., Spitzer, 1975). The rest of us are left wondering what is real and who says so?

This is a citation from Agrippa (1510). The question is: Does Agrippa talk about magic or science in this passage?

“... the pinnacle of natural philosophy and its most complete achievement…. With the help of natural virtues, from their mutual and timely application, it produces works of incomprehensible wonder…. Observing the powers of all things natural and celestial, probing the sympathy of these same powers in painstaking inquiry, it brings powers stored away and lying hidden in nature into the open. Using lower things as a kind of bait, it links the resources of higher things to them … so that astonishing wonders often occur, not so much by art as by nature.”

The answer is, Agrippa was referring to magic.

From Agrippa’s de Occulta Philosophia (1510) as cited in

Ever since this time, there has been a consistently ambiguous relationship between magic, philosophy, and science. Ever since the early modern age, science has been qualified in the following manner, as we read in Rothchild (2006):

Science is a never-ending, always changing process through which we learn to know the material nature of the universe. Science does not deal with nonmaterial entities such as gods, for there is no way their existence can be either proved or disproved (para 1).

From Rothchild, Irving. "Induction, deduction, and the scientific method." Society for the Study of Reproduction. 2006.

Yet, a practitioner of the magical arts could just as easily qualify magic by paraphrasing Rothchild’s qualification of science:

Magic is a never-ending, always changing process through which we learn to know the material nature of the universe. Magic does not deal with nonmaterial entities such as gravity [or black holes], for there is no way their existence can be either proved or disproved.

Science and philosophy in the early modern age assumed a rhetorical stance of distinguishing what could be known and ratified as knowable through systematic inquiry. Discussing Francis Bacon and his development of the logic of induction as the essence of the scientific method, Rossi (2013) notes:

“... two basic ideas of Bacon's philosophy: traditional learning must be replaced by the cult of nature so as to reestablish the contact between man and reality; collections of facts are a means of study, an instrument for scientific research and not objects of pleasure and curiosity (9).

Question: According to Stanton (2003), we know Isaac Newton studied alchemy and wrote a definitive text on The Emerald Tablet, one of the classic texts of magic and alchemy from antiquity. We know alchemists worked for centuries performing exhaustive studies of the elements, so what is the difference between alchemy and chemistry?

Answer: Alchemy is everything that predated the mastery of chemistry. It comprises the body of work that preceded modern chemistry, and in many ways laid the foundations for modern chemistry. When alchemy became mastered, unraveled, and understood, then it became chemistry.

Since the early modern age, science and philosophy is what we know.

Magic is what we do not know.

Thus, alchemy is a superstitious inquiry into magic.

Chemistry is a full-blown science based on the philosophy of science.

Magic was and is relevant to science because the unknown and the known always co-exist.

Therefore, the question is not whether magic is real or relevant.

The fact is that the unknown and the known are always relevant to each other. They exist relative to one another.

Therefore, magic is the spark of wonder and curiosity that always exists in the human mind.

Science is what happens to magic when it figures out what it is doing.

In the beginning, there is mystery and magic.

In the end, there is mastery and science.

In some sense, we are all advanced, masterful magicians who simply prefer to call ourselves scientists and philosophers.

Ever since the early modern age, science and philosophy have been politically correct, and magic has been the red-headed step-child of the human mind.

However, ultimately, the difference between science, philosophy, and magic may be a difference of semantics and political correctness.

Rothchild, Irving. "Induction, deduction, and the scientific method." Society for the Study of Reproduction. 2006. Print.