Sascha Vongehr
In China, drinking alcohol is often still a vital part of doing business. Science is important in China, which has become the scientific leader in several ways, but science is business of course. At times, alcohol belongs to science here.

In Asia, people mostly boiled their water to disinfect it. In Europe, we instead brewed beer and wine a lot more. Evolution did the trick real fast apparently, took only a few centuries biologists claim, and now I, a Caucasian, can drink more than most here in China, although some Chinese have build up tolerance for alcohol of course. Good for me is: They don’t seem to know about enzymes.

I know of the importance of drinking correctly at least since I lifted the glass extensively to the dean or whatever the equivalent is of some department – let us not get into details. After it was clear that there is little chance of starting to witness me making a fool of myself, Miss Li, who hadn’t touched her chopsticks for ages, was politely asked whether she is still hungry. Such is always followed by a polite “No, it was plenty and I am about to burst!”, which in turn is the desired signal for everybody to toast one last time ti empty the glasses and then stumble out.

Result: Somebody told me the next day that I “did well”!?! I didn’t do anything but drink too much as far as I remember.

Me participating in a drinking game. We think about what number next to indicate with our hands and which total sum to proclaim. Then we simultaneously go ahead: 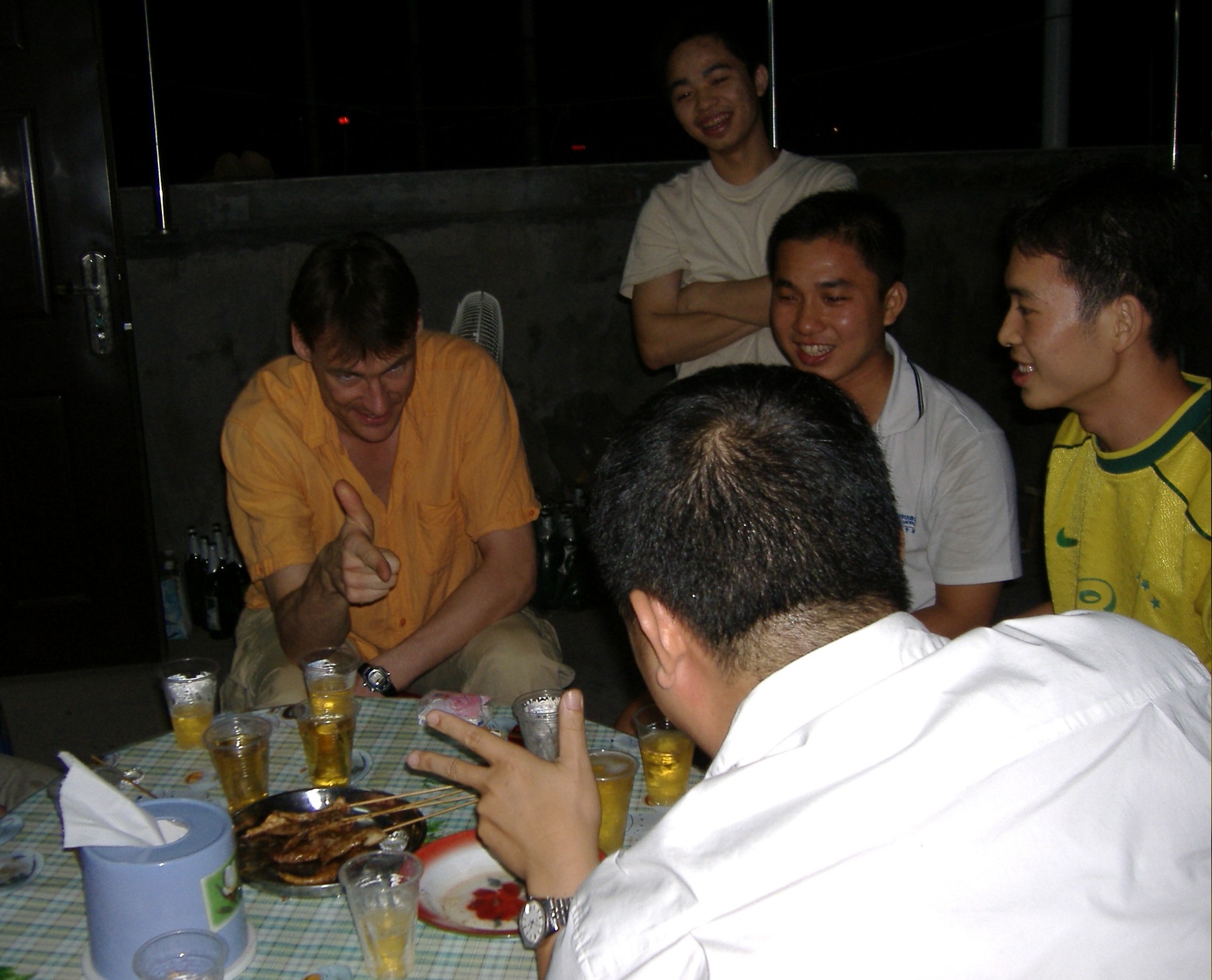 My right hand indicates the Chinese character “八” for 8 but I shout “15”. His left indicates 3 and he calls “10”. He is closer to the sum 3 + 8 = 11, so I must drink again. The more one drinks, the harder it is to anticipate the opponent’s next move. The Chinese guys beat me most of the time, but in the end, my liver wins the contest.

Some of the science related to alcohol should be of interest to the Chinese, especially to the patriotic ones: many Asians have a genetically based lack of the liver enzyme alcohol-dehydrogenase, which renders status based on alcohol consumption especially unfair. As said, in Europe in and around the middle ages, drinking fermented fluids like beer was preferred, rather than boiling in order to treat water antiseptically. This led to relatively recent evolutionary changes. Today, people of European descent express a more active allele that codes for the enzyme, which by the way also acts in the stomach already. Asians are well advised to steer away from drinking contests with Westerners.

Of course, everybody should stay away from unhealthy contests, and also among Asians does the activity of the enzyme vary a lot. It is a good idea to phase out this alcohol culture as fast as possible.

I see much progress here at least among the intellectuals. While many older professors still slowly smoke themselves to death, most of the research students and postdoctoral workers decline to participate. With alcohol it is somewhat more difficult, as it is still regarded obligatory to keep up with the older guys' drinking. However, even here more and more young people simply refuse to participate and filling tea into the glass instead and visibly to all.

The perhaps most important social function is thus still fulfilled; the tea allows the participant to initiate and respond to toasts. However, much opposed to the Western drinking contests that plainly look for who can stomach more, the deeper reason for the drinking in the Chinese culture seems to still be in vino veritas: Can the person, which you are going to do important business with, be trusted; can she behave under stress; or is she unreliable and shows her true colors once sufficiently uninhibited?

Or maybe I am biased about these cultural differences. At least, I have never witnessed fraternity beer pong/bong binge drinking here, and if the people get really drunk, they still mostly behave. So the guy had too much and while the others still sit around the table, he sleeps on the couch. Yes, I am still talking more or less official dinners, not about pals at home on a weekend. In fact, as long as the person shows that he or she can behave and in that sense handle it, face is not only saved, but she did well. All very civilized.