Sascha Vongehr
Black holes draw audiences, because they are weird, they are profound, they are Albert Einstein and Steven Hawking rolled into a singularity. Or some such – except, none of this is actually the case. The black hole is a much more mundane concept, older than relativity, and despite much misinformation in popular and pseudo science, black holes have in a certain sense little to do with relativity (and I say this although and because I worked for many years on black holes and used general relativity when doing so).

Yes, I know, our god Wikipedia claims in the very first sentence that “According to the general theory of relativity, a black hole is a region of space from which nothing, not even light, can escape.” This is not entirely wrong; it is just very misleading, and it leads people to go completely astray about black holes.

Many people are convinced that there are no black holes without relativity theory, that black holes are somehow defined or must vitally involve singularities, that consequently black holes are just
theoretical entities which have or cannot be observed, and even that any other approach to black holes, like the historical ones before relativity was around, have been crack-pot ideas.

The weirdness and the fact that some phenomena is supposedly unobservable to science, all this is a slippery slope to mysticism and has no place in publicly visible discourse about science. That’s
why the black hole issue is relevant.

Let us get one issue out of the way right now, before even discussing escape velocity, which I will introduce below: A black hole is a body so massive that its escape velocity v exceeds the speed of light c.

That’s it – no more – that’s what it was in 1783 already, and this is what it is still today, and relativity did not change a thing about it! Yes, you read correctly: this is still today the only and proper definition of a black hole. Read it again, learn it once and for all, and remember that it does not involve anything weird, like singularities or pathways to other universes, at all. Moreover, black holes are by now well known astronomical objects – they are out there and we have observational evidence.

In the historical part, Wikipedia also gets to the fact that “the idea of a body so massive that even light could not escape was first put forward by geologist John Michell in a letter written to Henry Cavendish in 1783 …”

It goes on to say “In 1796, mathematician Pierre-Simon Laplace promoted the same idea in the first and second editions of his book Exposition du système du Monde (it was removed from later editions). Such "dark stars" were largely ignored in the nineteenth century, since it was then thought that a massless wave such as light could not be influenced by gravity.”

Now this may have been what most people or a large part of the science elite at the point thought, but that just means that people like the geologist John Michell had apparently a better
understanding of physics then whatever group of famous names led the Wikipedia writers to employ the expression “it was then thought that”.

The details can actually be understood quite easily: Escape velocity is the velocity that a body needs to escape the gravitational pull of a massive body. 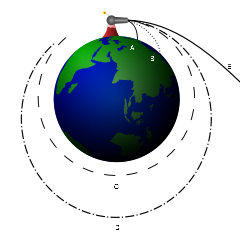 Escape velocity is quickly derived, if you allow me two simple equations: Consider trying to hurl an object, say a little pebble, so strongly that it leaves the earth and is flung out into space. In
the picture, they use a cannon for that. The kinetic energy involved is proportional to m v2, where m is the mass of the body that you fling into outer space, and v is the velocity with which you throw it. The body must be flung at least as fast as is necessary to overcome the potential energy of the body in the gravitational field of the earth. That potential energy is proportional to m M/R.
M is the mass of the big spherical body, like the earth or the black hole, from which we want the small object to escape. R is the distance from the center of the big body to the small object that we are about to fling out into space.

What is so great about these equations? Well, you demand the kinetic energy to be at least as high as the potential one and see that the mass m of the small body falls out of the discussion! It follows v2 is proportional to M/R. The escape velocity of the object is independent of its mass m,
and this holds regardless; however light the object may be, even if it has no mass at all and is as light as light!

It was already known at the time (i.e. in 1783 and before) that light has a finite velocity, which we can express by the constant c. What John Michell got perfectly right is that if the mass M of the large body is sufficiently large, then the escape velocity v exceeds that of light: v > c. If light cannot escape, the massive body is totally dark, and that is your black hole, or dark star.

Now some held the false belief that light does not interact with gravity. This issue was of course not well understood before the advent of general relativity theory. However, the very derivation we just went through should have told them otherwise. It would be wrong to claim that the proper interpretation of physics at the time would be that light does not interact with gravity, just because maybe many famous names attach to all kinds of misconceptions. Indeed, even when special relativity was proposed, many a good physicist was still trying to modify Maxwell’s equations; they were not all crack-pots just because history proved them wrong in the end. Scientists were neither sure about gravity nor about light. None of this diminishes Michell’s
accomplishment: he interpreted the escape velocity equation correctly in the context of Newton’s universal(!) gravitation. He defined the black hole in a way that is still the proper definition today.

What did relativity add? Relativity added two issues: Firstly, special relativity found out that nothing can go faster than light. Only in this sense does the “hole” aspect of the black hole become established by relativity. However, dear Wikipedia writer, NOT BY GENERAL RELATIVITY! The fact that light velocity is the limit is mere special relativity!

What general relativity added is basically only confusion: If general relativity holds true inside the black hole, there could be, in some cases should be a singularity inside. This however is no more than a sign; a little red flag indicating that general relativity is probably not true far inside a black hole. A singularity is here related to an infinite (divergent) density. This is not weird, not philosophy, not time travel or warp drive, not worm hole or quantum healing, dear Hawking and Caroll and so on, although such silly interpretations do sell silly books. A divergence to infinity in a physical theory is no more than a sign that the theory has left its domain of applicability and should be replaced by something better in the future.

Why do I ride on this singularity issue? I like to teach science properly, like in the boring universe,
so that people learn something and do not just go home with their heads full of misleading rubbish plus the notion that I am awesome. People who are under the misconception that black holes involve singularities are also under the impression that black holes have not been found in astrophysics, and that is just wrong. It is well established  that there are black holes in every spiral and elliptical galaxy. The best observational evidence derives from our own galaxy, the milky way.

So, the next time somebody rambles on about that he or she knows all about the mysterious physics of black holes, the answer is not “Ohhhhhha! Wow!”, but “Do you even know what a black hole is at all?”