Sascha Vongehr
9/11 implies some sort of terror for everybody, mostly in form of boundless hypocrisy. Was it unimaginable, unthinkable? I knew 9/11 would happen since I first saw the twin towers in 1995.

I was up on the top visitor platform of the Empire State Building, looking at Manhattan and the twin towers of the “World Trade Center” (WTC). As a child, I was fascinated with psychology, topics like body language. As a teenager, I looked at anthropology and sociology. Claude Levi Strauss introduced the social human to me. Such knowledge leaves no doubt about that the twin towers constituted a huge phallus symbol. Any primate, well certainly every human does recognize this on some level, even if they do not grasp it consciously and intellectually. These towers were the largest, most naked, stiffest phallus symbols in the history of mankind. 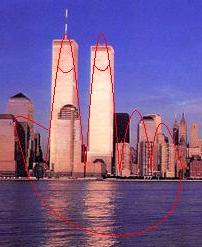 This message was not only globally understood, it was also subconsciously intended. This was not the New York or US trade center, this was named “World Trade Center”. It is universally understood by all humans and many primates that an erect phallus signals dominance and aggression. Phallus symbols are used in warfare. Especially South America, but also Asia, Africa, and basically almost the whole rest of the world understands that bombs are not the main currency dealt out in the war that is consistently fought. We trade. We shoot not with bullets, we strangle with dollars. On this view, it made perfect sense to aim at the WTC and the Pentagon together. You do not agree? You do not have to – it is enough if much of the world perceives it so, and apparently, it did. Why was this perception allowed to arise in the first place? The answer is the stupidity that comes with pride. A more modest society would have never let it come to such a monstrous insult in the first place, with or without knowledge of psychology.

When I turned away from the twin towers on that day in New York on the Empire State Building in 1995, I thought to myself: “Those will be there only temporarily!” I like to get on high buildings to look down and ponder ants and humans. I was tempted to scale the towers, but I was too afraid, because I expected that they would go up in smoke sooner rather than later.

What's the science here? Firstly, I made a prediction. You do not predict by gazing at the stars, consulting tarot cards or crystal balls. There is only one way to be a seer at times: A solid basis in scientific knowledge and much training and experience in using one’s brain rationally is the only way to predict what is likely to happen in the future.

Secondly, although I knew of the approaching danger, the same kind of knowledge also obviated that all who saw this coming had no way to warn the public about it. I would have been put away
in an institution or at least my visa would have been revoked and I send home as an anti-American trouble maker.

On 9/11/2001, I found my girlfriend in front of the TV, watching a tower burn. I remarked that I rather expected a truck-bomb on the ground floor to bring the towers down one of these days and that anybody intend on a large body count would have flown into a much lower floor. Looks like they tried to let most people escape – go figure. Since then, every 9/11 bombards us with rubbish and reminds me that I predicted the inevitable castration of the most irresponsibly, insensitively put, hugest phallus symbol in the history of mankind.

This would be the end of this entry, if we lived in a free world with semi rational people, but effectively I am not allowed to end it like this. I must address my suffering, feigned or not.

Should I feign mourning? I cannot let myself sink so deep. It is hypocritical to mourn for such a small number of people while very many more are suffering and dying due to the usual grind on a daily basis. We do not even need including body counts outside of the US. It is mainly US citizens that suffer from and get killed by the US, from its guns, car culture, air of fear and distrust, its huge prison industry, effects of drug prohibition, poor scientific education, and so on – all of which worsened through 9/11 and the wild and ongoing rage after the monster was castrated.

With so many innocent people in US prisons suffering right now as you read it this very moment, how could you possibly participate in ridiculous charades around a few thousand people whose fate some years back one can exploit for right wing propaganda?

Today, because it is 9/11, the media are so preoccupied with mind numbing 9/11 hypocrisy, you can be sure that all the shit that is going on goes on especially uninhibited. I identify as a scientist, and this is not to be confused with having a career in a social construct like academia. It means a bird’s eye perspective down onto the lines drawn in the sand. It implies to try to be a step ahead and look into the future. It means learning from the past. Let us honor all the millions of victims of 9/11 properly; let us demand real science education in the US.