Sascha Vongehr
Usually the arXiv does time wasting nasty things like delay and then re-categorize articles with inconvenient truths into unsuitable categories where nobody of the target audience will find it and the usual audience is not interested. This however is 2016, the year where the liberal denial of reality has accumulated so much suffering, for example to the Black community, women, the Middle East ..., that people can no longer stand it.

Everybody, males, females, Whites, non-Whites, ... is nowadays personally harmed by the established anti-scientific ideology of denying the differences between humans and our evolutionary constraints. A positive feedback loop after a certain threshold has now been reached:

If you are called a racist/nazi/whatever regardless what you say, why even try any longer to formulate PC-style? People go "fuck it" and say the truth Trump-style without apologizing. 2016 feels fucking great - British independence and all. The truth is oozing out the more the establishment applies pressure to keep it down - comment sections and youtube/twitter channels and so on are banned at an unprecedented rate, people are smeared and removed from their work like not seen in a long while in recent history, but the dams are breaking and there is no way back now: There may be no soft landing anymore - the pendulum may just once again swing all the way to the right - it certainly is on its way accelerating all over the world - yes even Germany, the most brainwashed, is now waking up, not just China, Russia, eastern Europe, the Philippines, ... and of course the US - Brexit is after all partially another of the many accomplishments that Donald Trump has already amassed merely on his campaign trail - brother Nigel knows and appreciates that.

If the idiocy of the elites once again makes it so that the pendulum swings all the way, rivers of blood will follow soon, of course, but humans are apparently still unable to advance in any more rational way, so I guess it just has to happen - I am glad to be White and save in East Asia - the popcorn is ready, I will enjoy the spectacle. Thank your local liberal pseudo-intellectuals.

The arXiv now also finally shows its true face and simply rejects my work. For those who are new here: I have put my drafts on arXiv for many years since the arXiv's very beginning in its hep-years. I know very well what belongs where on the arXiv. I expected the usual shit from its mediocre PC moderators (what kind of failure do you have to be to do a job like that inside the scientific community instead of doing science?), but this is 2016 and so they simply refuse to post my most recent work, one of the most widely relevant and well researched by this established researcher.

Did they perhaps listen to me - remember (and I did email it to them):

Question to the arXiv: Since it is 2016 and all kinds of venues are desperately shutting down free speech openly and with large support, why don't you just come out and openly black list critical people already? You will be surprised about how much support you will get for that, and it saves you a lot of time, too - why all this forth and back nonsense via email every time?

Once more I thank viXra, the free speech alternative to arXiv, for making important research available to the world. Do you want to read cutting edge research that at present has a bunch of experts rethinking their own theories, and that is banned and suppressed by the left although it has an anti-anti-Semitic conclusion, simply because it has to draw on some inconvenient truths in order to arrive at its results? Here you go:

See the highly timely (given the rising right) and widely relevant work against antisemitism that would, due to its relevance for the public understanding of science and its relevance for scientific experts in their lack of appreciation for proper statistics each alone, be published on the front cover of Science and Nature if the scientific community would not be one pillar of the denial of reality:

This paper is now discussed by some well known experts in the field of IQ research. This is not going away anymore. I am in the process of revising due to the fellow experts' advice, and they have supplied not a single criticism - all the revising is about how to clarify all the important points that the suppressed paper touches on, none is about any mistakes or wrong data - the results are rock solid robust. Stay tuned to this channel - there will be articles on the meat of the research here. (Patience! I am also busy with the EPR-MW model now - also that project seems to finally go ahead in a big way - 2016 is truly a great year also for me personally, not just the rest of the world.)

Oh - before I forget: Here the very thing that the arXiv moderators want to censor: 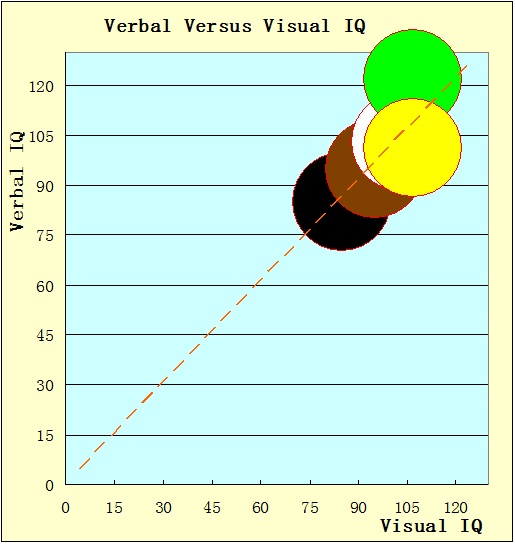 Figure 0*: Verbal IQ vs. visual IQ values; the data points are circles with a radius of 15 points (= one average standard deviation) in order to illustrate the overlap between sub-populations. The North East Asian (yellow) and Ashkenazim Jew (green) circles are shifted significantly from the common trend-line (which is a diagonal on grounds of the normalization of the different IQ measures). [* Yielding to the current academic suppression of proper science on differences between (especially certain) human races, this figure and figure caption is not submitted to peer reviewed scientific journals.]

Well, sorry, but without the black and brown and white circles, there would not be a trend line, would there. Damn you science, why are you so racist?