Sascha Vongehr Blows Up and Goes Exponential: Place your Bets Now and Win The Prize of All Prizes
By Sascha Vongehr | October 31st 2011 11:17 PM | Print | E-mail

Yeah – Sascha Vongehr – yours truly – also known variously as attention craving publicity click whore or “$h*!-spammer” according to promptly censured commentators, has now finally achieved his only aim in his sorry-@$$ life and pimped up his titles so hard that he blows up – reader numbers are skyrocketing! That makes him really happy because it is only attention and clicks he craves – no more, because clicks he hopes make him happy, though strangely he is actually no happier than before, but more clicks surely must work mood lifting eventually.

He partially deludes himself thinking that keeping his promise of only writing “straight $h*! on the next level” with definite “future relevance”, cough cough, has something to do with it, but delusion has never harmed a click whore – on the very contrary!

Just three months ago he wrote:

“Traffic goes up surprisingly linearly, every month by about 3700 heads– no exponential take-off, no indication of saturation yet either”. (Emphasis added as if important) KiloReaders per month after one year of Alpha Meme: Seemingly a linear Sisyphus affair as if it’s 1980 or so. Damn – we live in the internet age – I want to jump from one hot air bubble to the next just before the previous one bursts.

Anyway, as of last month, the best two-adjustable-parameter fit to my Science column Alpha Meme’s stats is neither linear (R2 = 0.71), nor a potential law (0.72), nor even quadratic (0.79), but as should be completely expected for shameless self-centered attention grabbers like me (nude-photos are in the making): EXPONENTIAL! We are talking a whopping R2 = 0.89, which is almost 0.9, which is almost 1, which is 100% !!! Sascha Vongehr going exponential has an R-squared of 100% in bold face and you read it here first. 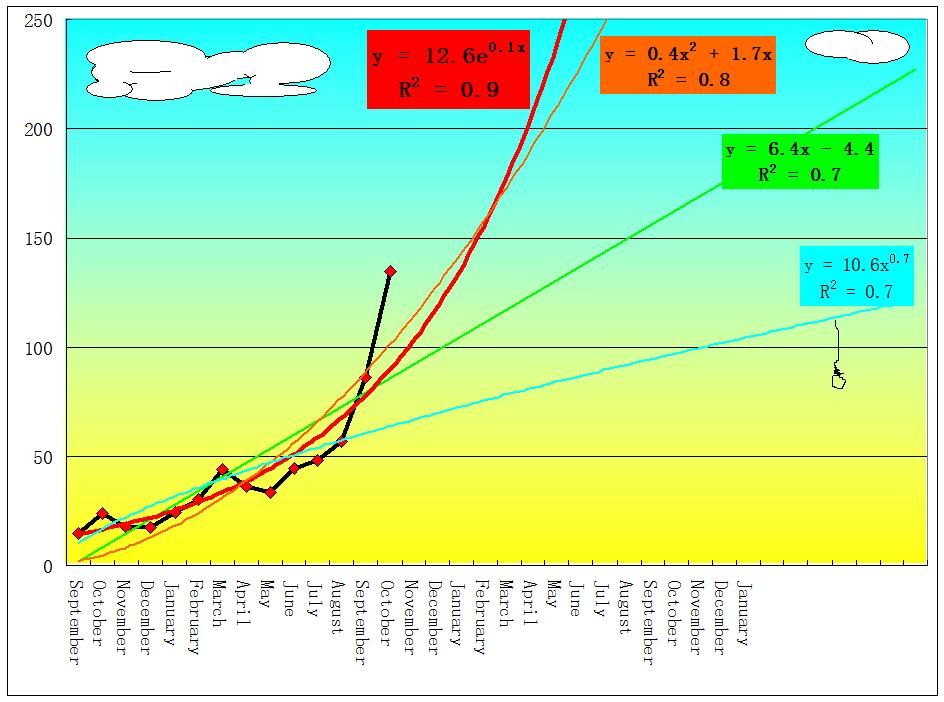 As with any successful crap out there in this as terrible as all others of all worlds, Sascha happily gains most by callously exploiting others' misfortunes and suffering: Best yet was Japanese dying like flies and particle physicists having a systematic error they cannot figure out. Suckers! Where would I draw the line? On a shattered bathroom mirror with Lindsay!

Now let’s do what attention whores are supposed to do, namely make a spectacle out of themselves! When will Sascha reach the 200 thousand per month milestone? Place your bets into the comment section. In which month will it be?

The Inflationary Exponential Big Bang of the Vongehrverse (red hot curve in the graph) is scientifically proven by massaging data in mSEXcel and predicts March!

If you think that I am at most a square head (orange function): April/May.

If you think this is all just due to even noise fluctuations being still bigger than me and I am nothing but linear, bottom feeding from past posts that people by mistake stumble upon (green line): Also April to May, but 2013, not 2012.

Or, if you really hate my guts as all Apple fanboys now do for doubting ‘The Steve’: The potential law (in ice cold blue) predicts never, because attention whores kill themselves six meters above the ground once they realize nobody actually gives a ragged rat's rear about them. (In the later two cases, your comment will be deleted if not already self-ridiculing by bad spelling.)

So – what is it going to be? The winner will be determined as always in the media world by assessing the best strategy for yet better ratings, if necessary by changing the rules afterward in the “what they really meant” section, so I may as well spare me the bother of presenting any rules at all.

Prize: The prize! Being publicly mentioned by another publicity whore! (Hey – that is after all why I blew up or anything does these days!)

Means what? Let me explain in detail: You predict January or February 2012 because Sascha Vongehr is personified awesomeness, which is just stating the obvious so go ahead, and if you thereby work the hype so much that it becomes a self-fulfilling prophecy, then you win and we can together rise into heaven on earth, eh, cyberspace. Intertubes – we are coming for you.

If you did not enjoy this article as much as I did not expect anyway, good, me neither. There is stuff that I would like people to read much more than those articles that brought us here; I recommend the articles on EPR and modal realism as a good start: