I may today perhaps make the boldest claim I ever made, at least many will think so, and I am not known for my humbleness (though I should be – how many established scientists do see themselves as merely a perverted, psychopathic robot?): The world’s first ever touchable, functioning quantum many-worlds model that can violate John Bell’s inequality even stronger than standard quantum mechanics! 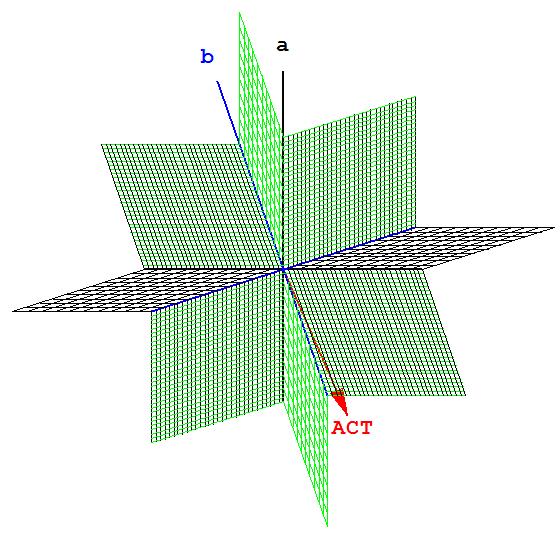 A model with standard quantum probabilities – every little area is a parallel world. The red arrow ACT represents the ‘actualization’ of a single future which realists insist on. ACT tried to determine the ‘actual future’, but failed to hit any (this picture is the outcome of an actual run of a working model!), basically switching the universe off.

Given widespread misconceptions about what Bell proved, many doubt that any such model can violate the Bell inequality; they tacitly confuse “real” with “touchable” rather than thinking of intricate issues like ‘counterfactual definiteness’. 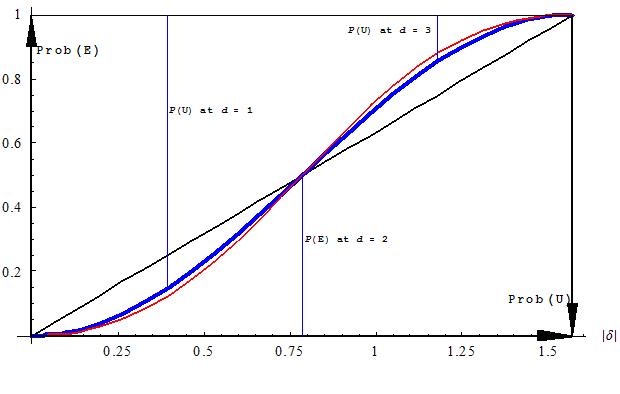 Non-quantum models give a straight line (black diagonal). The correct standard quantum mechanics results in the thick blue curve bulging away from the straight line. The three terms of the Bell inequality are presented as thin blue bars. Obviously, the bulging corresponds directly to violating the Bell inequality. My ‘transition model’ bulges even further (red curve) than standard quantum models.

The involved mathematics is trivial, but so is Bell’s proof, the history of which proves: In the “local realism” debate, a proof being obvious does not stop even many scientists from doubting it anyway.

Moreover, I thus claim the very likely first interactive science-outreach exhibit (a kinetic sculpture) teaching quantum physics without misrepresenting the science. There are ever more ‘quantum artists’ out there who distort ‘measurement-influences-measured-system’ (which is purely classical physics!), mix in consciousness-woo, or reduce the issue to small-is-weird (facts like that a radio-wave photon is hundreds of meters long (wave- and coherence-length wise) seem to never cross their minds).

Independently of Smerlak in 2007, I resolved the EPR paradox by showing that such many-worlds models are possible [2]. However, I did not yet have a working model then, but only the proof of such being possible. Now I present the models, and I present them on the high school to undergraduate level. Yes, you can understand it!

Let us not forget why we are interested in this. This is a forceful, uncompromising rejection of the ‘naïve realism’ that afflicts especially many scientists – which is one of the main hurdles for the unification towards a theory of everything.

The empirical disproof of naïve realism is humankind’s the most relevant finding in the realm of science and philosophy, the greatest discovery of the last century; there is no excuse to be ignorant about it while pretending you are interested and knowledgeable about all the awesome cool science. It was a difficult topic once, but there is no excuse anymore: Any good high school student, certainly any undergraduate can follow the argument. A lot of work and thought about how to present it most easily has gone into this – here the highlights:

Highlights of “Against Absolute Actualization”:

-      Clarification of the usually confused, three different concepts of “non-locality”

-      Clarifies that many-worlds models can be non-quantum

-      Announcement of the first ever touchable, functioning exhibit of a quantum model

(Artist and IT-crowd collaboration is strongly invited, however, one main reason for involving you is the dual use of providing evidence for that laypeople can understand the models (!), which is almost the main claim of my work, namely that in the ‘modal paradigm’, quantum concepts are self-evident and natural much like anybody today understands that the sun does not circle the earth. Most popular physics “explainers” today still claim the equivalent of that you need epicycle theory beyond human grasp to understand what the central position of the sun renders obvious. I have zero tolerance for popular BS that sells well! So, if you want to add science-outreach to your CV, I welcome you, however, due to experience: I take nobody seriously who does not contact me right away with a clear description of what it is that they have already understood via my model (write your draft for a short quotable justification of your serious support of my model as an effective pedagogical tool that can teach otherwise impenetrable scientific concepts) or at least a clear description about where in the new article you cannot follow plus a constructive suggestion to revise starting at a specified point in order so that you and others who have likely similar difficulties may follow one step further the next time.)

[1] "Against Absolute Actualization: Three“Non-Localities” and Failure of Model-External Randomness made easy with Many-Worlds Models including Stronger Bell-Violation and Correct QM Probability." arXiv:1311.5419 (2013)