Stupid Donald Trump Follower: Well, that’s better than what we had before, but I am still not convinced such does anybody any favors.

Heil Hitler Screaming Nazi: Hey, you will like this – something entirely different right up your creek. We were drunk on the beach and I started to doodle swastikas in the sand and suddenly we were wondering how a three dimensional swastika would look like.

Stupid Donald Trump Follower: Oh gee! How is it that such a damn troll like you always gets me by the balls? You know my mathematician’s mind won’t let me rest about this now. You just want to tease me again. Why not just give me your terrible answer, whatever evil it is, straight away this time?

Heil Hitler Screaming Nazi: Getting the evil out of you instead is the whole fun of it! Second, we are really stumped.

Lovely Liberal Lisa: Yes, honestly, we don’t know. I thought that the swastika is best understood as a figure that starts out with lines drawn not along the x and y axis like a plus sign “+”, but along the diagonals like “x”. And then, when drawing each line from the origin in the middle to each of the four ends, one turns always right at the end for another step.

Heil Hitler Screaming Nazi: I immediately liked the “going right”, but in three dimensions, what would the generalization of “going right” be?

Lovely Liberal Lisa: Moreover, such a 3D version would have eight arms. One can hardly see anything and it looks fragile. So we better stay with drawing along the coordinate axes, like the plus sign “+”. Then the 3D one has only six arms and looks sturdy, like the original.

Stupid Donald Trump Follower: You know what. Let’s ask an expert. There is this physicist philosopher guy who as a child already painted four dimensional hyper-watermelons and calculated the properties of up to infinite dimensional pyramids. He came up with 4D hyperspace helicopters, a puzzle that relates to why our world may have to be 3D.

Heil Hitler Screaming Nazi: What a coincidence – I already emailed that guy yesterday. I got to know his stuff because he has the most Aspergerian way of analyzing social issues. Stupid lefties call him a Nazi; stupid Nazis cannot stand his objective analysis of the Jewish question and support for China. I love the guy – an awesome troll sometimes, too.

Stupid Donald Trump Follower: Yeah, I suppose you like that a lot. Want to log in on my computer – he answered my email once pretty fast. 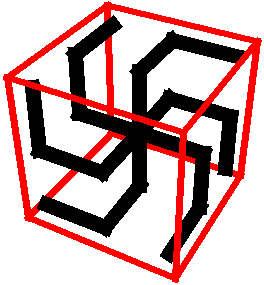 Lovely Liberal Lisa: My god, it is beautiful, but is this not similar to the same we already discussed on the beach? Does this give the 2D swastika?

Heil Hitler Screaming Nazi: Hmm, he writes that this is the view from the positive x-y-z quadrant onto the coordinate origin if the rule is to go one step along each axis, alternating positive and negative steps. If you go first one unit along negative y for example, then the next step is +1 along z, and then negative again along x if there are only three dimensions.

Stupid Donald Trump Follower: But this does not result in the swastika if there are only two dimensions.

Heil Hitler Screaming Nazi: Let me see - he writes that the 2D swastika can be seen as a one-sided view of the real thing, while the full cross is too complex to fit into only two dimensions. He attached some rotated views down here. 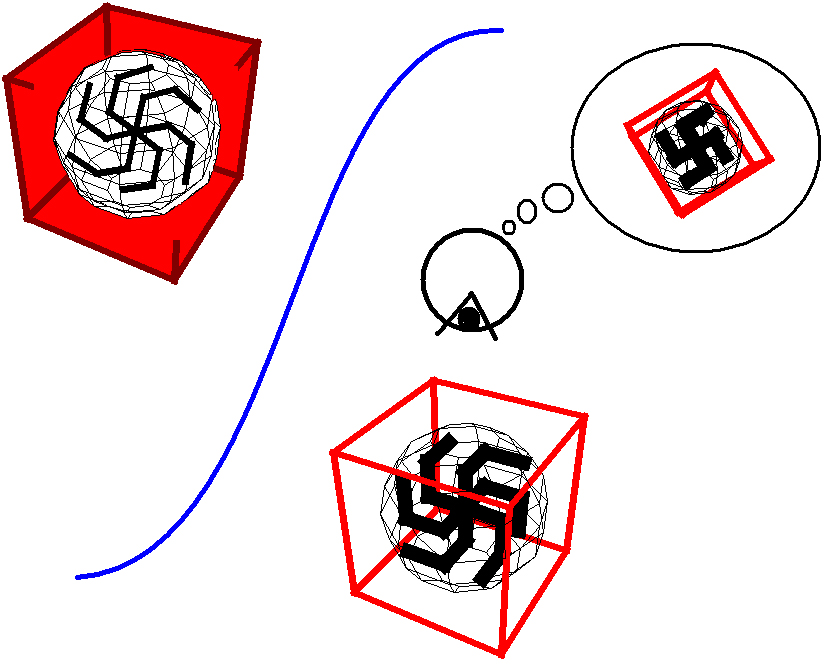 Stupid Donald Trump Follower: Jesus f’n Christ! This guy reminds me of you! No shame! Did he really need to use these colors? And the white sphere?

Heil Hitler Screaming Nazi: He writes that he put a sphere to help me understand the point of rotating the cross into different perspectives. He writes that if you don’t realize the depth, the third dimension, the deeper level, and only project onto a flat two dimensional interpretative framework, you see only the 2D swastika and may get the wrong impression.

Lovely Liberal Lisa: Hey, I really like it. This is exactly what I and all my left wing friends, well ex-friends now, always talked about. To reclaim the narrative, to appropriate the hate symbols, re-interpret them on a higher level. This should be the new symbol for a true revolution of the mind and heart.

Heil Hitler Screaming Nazi: I totally agree. The swastika is after all the most recognized symbol in the world, beating Jesus’ cross and the US flag in some parts. Hitler designed it many years before he took power in order to conquer the hearts of the people and scare the communists, and by golly it worked.

Lovely Liberal Lisa: God, it makes my loins quiver just looking at the 3D thing. It is truly in all ways the next-level, pregnant with energy and meaning, at once incorporating and elevating the original as well as simultaneously denigrating it to the status of a merely one-sided, flat perspective of the deeper truth. The red now stands for the love necessary to understand different perspectives.

Stupid Donald Trump Follower: Guys, I am pretty close to kicking you out of my office again. Do you now conspire to troll me, Lisa?

Lovely Liberal Lisa: But this could be the symbol for the Trump age!

Heil Hitler Screaming Nazi: Yes– just think about it. We should call it the Trumpen-Kreuz, or Trumpen-Cross.

Lovely Liberal Lisa: The Trumpen-cross symbolizing the need for rational free speech that does not fear as it is confident to incorporate all perspectives, synthesizing them on the next level – the Marxist will also like it.

Heil Hitler Screaming Nazi: Yes– think about it. And it was conceived by a scientist, too. No more speak about supposedly failed artists. Instead, Vongehr’s Rational Free Speech Trumpen-Cross Next-Level 3D Hyper Symbol For the Alt-right Revolution of Love. You got to be on our side here.

Stupid Donald Trump Follower: Guys, I, I, ... I am speechless.