Pathological Thinking: A Response Of The Season Of Love To The Current Outrage
By Sascha Vongehr | December 19th 2012 08:41 PM | Print | E-mail

Outrage about another school shooting does its part to increase vigilance against the odd ones out, the misfits soiling the norm of usual irrationality, the a-socials, the depressed, the autistic, the evil psychopaths.  Gate keeping HR departments homogenize the workforce.  “Professionalism” cleans academia of all that does not perform under the marketing paradigm.

However, normalcy is the problem!  Pathological thinking is necessary for seeing solutions!  At this time of year, I desire to express my love:  It is regrettable that the killer had to die.  We should have saved him to show forgiveness, to let everybody see our compassion, also in order to understand him, and thus ourselves.

Consider a complex system that has one parameter, call it “IQ”, perhaps three standard deviations out of the usual average for such systems.  If a highly integrated system like a brain happens to be so abnormal on one parameter, it is highly likely that it is also pathological on other parameters.  How many of those who seem normal just use their IQ to fake it?  Weeding out the weird among us merely selects against the last remnants of honesty!  A society based on deception is thus stabilized.

Evolution (biological, social) “made” our brains to perform specific rationalizations.  Our minds use primarily thus selected emotions and beliefs in order to cognitively react (“think”).  Normal brains are not made to do science or seek honest truth.  One of their main tasks is to deceive us!  What can be reasonably called some sort of deeper “truth” is not intrinsically difficult.  Instead, it is evolutionarily self-destructive, not good for “reproduction”, for (its own) procreation.  IQ is insufficient!  Insight into deep questions needs pathological brains!  What makes me able to walk into those scary, dark issues and entertain “crazy” enough ideas (yet not just irrationally loony ones), is those very character traits that make normal people hate me.  We are the high and medium functioning on the autism spectrum.  We are those with psychopathic tendencies, those able to think beyond the narrow constraints, the anti-social,the pervert thoughts, the unacceptable ones.  If you think we have any desire to change into normal people, let me respond with a big hearty laughter. 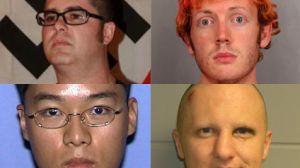 Victims of normalcy – my love goes out to them. Source

Killing children maximizes the suffering of adults.  Burn his house, but insurance may turn it into good fortune.  Kill his wife, and he enjoys a new one soon, the previous all but forgotten!  But kill their child, and suffering will be immense.  Why want suffering?  Because revenge is taught in every movie, almost every decision we see those do who are given to us as successful role models; to punish via inflicting pain and to be proud of such.  That is not psychopathic; it is the norm!

They learned the lessons, the only way they could, about not actually caring, about punishment and revenge instead of prevention, about mass imprisoning innocent and forbidding what should be available to all in order to help them cope with society’s stressful idiocy.  They soaked up all the norms but were not social enough to grasp the insincerity behind them – how are those on the autism spectrum supposed to know that your norms are not meant to be taken seriously, that they are just a façade?  Took me 30 years to figure that one, and I am not exactly stupid.

They applied what they learned, and killed your children, instead of rejecting society’s idiotic norms, say about human children being special while all other animals are made to suffer.  Criticizing society's norms is what losers do, so it is taught, and losers are losers, so they agreed.  Everybody must get their 15minutes, must be an individual.  They did as told and succeeded, and you envy them.  Revenge ethics in a corrupted, individualistic rat-race society – if you thought you saw the last shooting rampage or biggest mass killing, think again!

There will be little progress on fundamental scientific questions or social problems without the embracing of pathological thought.  I only present my readers with the most disgusting, sickest, suicidal, perverted thoughts.  You are welcome!