Look at a fan rotating its blades. Now look somewhat to the side of it. It seems to rotate slower now. Now shift your gaze slowly back toward the center of the fan. The fan seems to pick up speed. There are not just two appearances of its speed, one fast if I stare at it, and one slow if it is in the periphery of my visual field, but instead the fan seems to pick up speed gradually!

Concentrate on one blade, perhaps hear it hit the fan's frame at a certain spot maybe, or count how it returns to the top position perhaps every half a second. How can it seem slower if looking to the side? Such an effect being possible at all, it could be conceivably pushed further. Some creature may be able to shift its gaze sufficiently to slow it down all the way. Imagine you look at it in such a way: The sound is the same rapid tic-tic-tic-tic, you still count two per second as you see a particular blade turning, however, the feeling is that it stands still. Does this sound impossible?

The red color of the rose and its shape are processed in different areas of the brain, and the shape of a face again by a different one. The colors and shapes combine into objects of our experience. They do not appear as fragmented information about the red rose, but as a red rose. Nevertheless, we know that they are all different sorts of feelings that could well be absent, say with a color blind person. Especially the redness we know to be illusionary; there is no such thing as redness out there (at least not in a naïve mechanistic physicalist way, although the ‘argument from knowledge’ can be made). These feelings, redness, the shape of a box, are hallucinations dreamed up by the brain from nothing but electrical inputs into it, while physically, perhaps even the 3D box is better described as a 2D mess of stringy excitations on a quantum gravitational holographic horizon.

However, speed, or movement as such, seems to be not such an illusive feeling as color. While the same yellowish green object often appears more or less greenish on another day (there seems to be a monthly cycle even for women), the speed of an object seems to be not a feeling added onto the shape. The movement seems to be simply that the shape is first here, then it appears a little dx further, and then further again, and so on.

However, just like some frogs cannot see what does not move, there are people who can see well, and yet, they cannot perceive movement. Stepping on an escalator is very difficult for them, and watching a train come into the station scary. I cannot imagine how it looks like, how it feels, how it can even make sense that you see all the instances of a moving object being at different places, yet, you do not see it move. And yet, even movement is a feeling added by some dedicated neural modules, and if they are broken, nothing moves. Do I even believe such?

Looking at the fan, well, and thinking hard about it, you can realize that the “flow of time” feeling is indeed an illusion based on the feeling of movement, which only seems "real" in the sense of that it seems to healthy persons as if it could not possibly be a feeling added on top of the perceived visual scene, but is instead simply the fact of that the seen shape changes in front of the background, that it is first seen here and then there.

It needs some thinking. You could try to dismiss all this by assuming that the brain compares the positions of the shapes to internal clocks, for example by that the retina may be read out periodically every hundreds of a second or so. You could argue that the periphery of the visual field is sampled faster, and so movement appears slower there. However, not only would the gradual speeding up of the fan if you slowly return the gaze toward it not fit to that theory. But moreover, such an explanation just supports that the feeling of the speed is not coupled to the “actual speed”.

“6.3611 We cannot compare any process with the “passage of time” — there is no such thing — but only with another process (say, with the movement of the chronometer).” [Ludwig Wittgenstein: Tractatus Logico-Philosophicus, Routledge and Kegan Paul, London 1922]

Even if you did not agree with that the “actual speed” is fundamentally nonsense because there is no such thing as a speed to the “progression of time”, surely you agree that the “actual speed”, if that is anything meaningful, is given by how often a certain blade of the fan returns to the same position per minute for example, the latter being that the second hand on the clock returns to its initial position. And surely, that actual speed does not change with the direction of your gaze. And consider well that the fan can be slow enough so that you always see the blades quite clearly. You see the one blade that you concentrate on returning to the uppermost position again and again, and you know it is the same speed, and yet, it feels fast or slow dependent on how you look at it.

The ongoing of time, movement – mere hallucinations like the redness of red. There are popular misconceptions about time “not existing”, and that such insight is supposedly a result of modern physics. However, the valid ways in which time “does not exist” are known since Parmenides of Elea and Zeno, or at least Wittgenstein. I write “at least Wittgenstein”, because he certainly also understood that “time does not exist” is otherwise nonsense. Time is well defined as a labeling of changing patterns via clock cycles, where the clock is itself a changing pattern that is sufficiently symmetric in terms of clock periods being indistinguishable, interchangeable, as to be regarded as “regular” and reproducible.

Yet although I have intellectually always known that the “flow of time” is a mere illusion of course, nothing has made it clearer than looking at a fan and shifting my gaze and thinking about that eerie slowing down that seems as if one potentially could shift one's gaze further still, and further until it feels as if the fan hardly moves at all yet at the same time we see the bladed return to the top position at the same rapid succession. 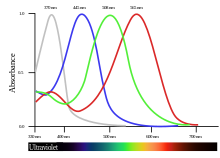 This is the great value that future neural manipulation and enhancement (much better than drugs today) have for philosophy. If we could switch off the neurons responsible for the feeling of movement and flow of time, for one example, that could substitute for a whole lot of writing about the issue like I do here. I predict that the issue of qualia and experience, say that of colors, will be understood much better through the cyborg revolution, by adding hyper-purples for example, and finding out what it takes to do so, whether we need to substitute somehow for evolutionary grounding by long training, or whether we can very directly enlarge our so called ‘global work space’ by plugging something in, whether the overlap of response curves decides between yellow-blue versus green-red appearance of opponent channels and all of that.