Tautological Description-Relativistic Metaphysics IS The Theory Of Everything
By Sascha Vongehr | February 17th 2015 11:42 PM | Print | E-mail

Modern physics is not accidentally relativistic and quantum, or in other words, Einstein-relative as well as Everett-relative (Bell-violating Everett-relativity is the very core of quantum mechanics!). Modern physics becomes ever more relativistic still today, and description relativity has revolutionized fundamental physics (see string theory dualities, Maldacena conjecture, black hole complementarity/holography, and so on). Why? Because we must take the observer’s perspective, and this means the describer’s perspective, ever more into account. We ‘pull back’ onto the finished (experienced) observation that ultimately determines the outcome of any measurement, and therefore we eventually complete a full pull-back onto phenomenal, “subjective” experience.

We also know that the theory of everything (ToE) cannot be falsifiable empirical science. Metaphysics has always been the driver of cutting edge physics. Einstein would never have touched Riemann’s mathematics without first having discovered his elevator thought experiment. Especially today, because quantum mechanics is firmly established, those who count metaphysics only toward philosophy simply do not understand physics! However, we need a new way of doing metaphysics in order to avoid the ontological dead end. Tautological description-relativistic metaphysics has now proven that it can do this and lead to exact science.

There is nothing more obvious than the tautology of that “I experience, therefore I experience”. Grounded on this tautologically self-evident start, Descartes’ “I think therefore I am” is unassailable! Once more: Descartes’ “I think therefore I am” is tautologically true as in “I experience therefore I experience” (E => E). The naïve scientistic objection on grounds of that the experiencer of the thoughts is not necessarily the brain that does the thinking is a straw-man argument which insists on a body-mind dualism that the historical Descartes may not even have agreed with. My existence (E), namely the existence of at least the experiencing of being bothered about these questions, is beyond doubt for anything that is bothered about these questions.

The early Wittgenstein held logic to be empty because nothing but tautologies such as “A = A”, “P => P”, or “P or not-P” can be ultimately proven to be true. However, a tautology like Descartes’ “I think therefore I am” has two ends. Although they are fundamentally the same (namely E), they point toward different associated aspects. This fills the tautology with content!

By regarding “I think therefore I am” explicitly as a tautology, we understand that the two ends of the expression define each other, namely for example my being (“I am”) is thus defined to be concerned with the experience of my thinking (E) rather than, say, emphasizing the description of my body as it is hardly changed if in a coma.

Take for one example TO, the totality of all possible experiences (or experienced perspectives, or observers O, therefore “TO”). It implicitly defines what “possibly existing” means. The so called Plenitude Principle (“all that is possible exists”) becomes the tautological certainty it always was to mature philosophers. This resolves the pseudo-problem that surprisingly many still today seem to be hung up on, namely satisfying both of these, seemingly mutually exclusive statements together:

1) The difference between possible and necessary is that the possible does precisely not necessarily exist.

2) Being fundamentally possible means to be in the totality of all possibilities, therefore, whatever is possible automatically necessarily exists in totality.

For another example of implicit cross-definition, take “total totality” TA (see picture). It must be defined in such a way that no further beyond can be referred to, otherwise the question “Why is there anything rather than nothing?” (WITA-RTN) can still be asked as if there is an alternative, namely the “N” in WITA-RTN. The definition is thus not just a trivial definition of a set of all sets. Rather this definition of TA emerged out of an argument and implicitly defines also what “referring” for example can mean on that level. The argument resolves WITA-RTN partially, because WITA-RTN’s “N” is “inside totality” (TA). This avoids an infinite regress without N being inside the totality of everything possible (TO)! “Nothingness” is not an alternative possibility on the “multiverse” level, which is obvious here but still extremely confusing to many scientists and philosophers. 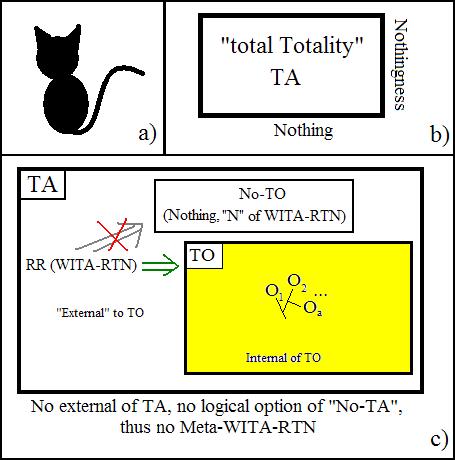 a) Pointing to outside of the model-cat (the black cat model) may refer to a place near the modeled cat. The outside of the model-cat is not just a necessary part of the model but moreover can belong to the referring bits of the model. b) “Total totality” TA already includes all possible directions and realms beyond by fundamentally desired definition, so nothing is beyond TA. Outside of the model-totality TA is a place in the model, but it does not refer to anything that the model is supposed to refer to. In the model, “nothing” is outside of TA, because “nothing” does not refer to anything; it refers not to nothing, but rather “nothing” does here no longer “refer” in a modeling way at all (by the same definition), and it is now always just a part of the model. c) In the space of all O, nothing is outside of the totality TO of all O; this is tautologically true. However, the origin or grounds for TO, its “right reason” (RR) for “why is there anything rather than nothing” (WITA-RTN) is somehow “beyond” (not even in orthogonal dimensions). WITA-RTN’s “N” is “inside totality” (TA), but not inside the totality of everything possible (TO); “Nothingness” is not an alternative on the “multiverse” or many-world level!

Where does this lead? Some regard progress on WITA-RTN as mere philosophy, but if you agree with the beginning of this article, you may expect that the widely desired ToE provides Einstein-Everett relativity without empirical input. Indeed, that is precisely what this way of doing metaphysics provides! Therefore, tautological description-relativistic metaphysics is (part of, the start of) the unique theory of everything!

Allow me to finish with a footnote* telling in a few sentences the whole rest, because otherwise, just claiming to pull relativistic quantum theory out of Descartes’ hat cannot be taken seriously, but presenting it with the same tautological clarity will need many articles, some tedious ones.

* Warning, incomprehensible footnote: Apparent causal ‘flow of time’ is a priori in experienced perspectives. TO must have a description in terms of connected event structures that correlate futures causally with pasts. TO as such is “timeless” and therefore all such correlating connections are instantaneous synchronizations in that TA perspective. Therefore, fundamental time is metaphysically necessarily Einstein relativistic; it can only (and for several reasons) be self-consistent as an apparent light-cone structure. The apparent/emergent space is automatically in form of a relativistic space-time. It has been shown before (based on the same metaphysics) that Einstein-local space-time is auytomatically Everett-relativistic, meaning that it must be an event structure with multiple potential pasts; it is not a single-future-determined block-universe, but a structure of potential events. It was also already argued that an Einstein-local many-worldly structure is necessarily standard quantum, implying the quantitatively correct quantum correlation between the potential worlds of Alice and Bob in the EPR setup. In summary, exact science, i.e. the correct relativistic quantum theory, obtains from pure metaphysics.