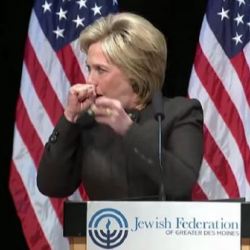 Democratic Presidential contender Hillary Clinton is back on the campaign trail after the 68-year-old rested at her home in Chappaqua, New York for a few days last week following what appeared to be a dizzy spell during a visit to the National September 11 Memorial and Museum at the World Trade Center on September 11th, 2016.

After that, Dr. Lisa Bardack, M.D., chair of internal medicine at the Mount Kisco Medical Group and her personal physician since 2001, released a statement which read, “Secretary Clinton has been experiencing a cough related to allergies. On Friday, during follow up evaluation of her prolonged cough, she was diagnosed with pneumonia. She was put on antibiotics, and advised to rest and modify her schedule. While at this morning's event, she became overheated and dehydrated. I have just examined her and she is now re-hydrated and recovering nicely.”

This led to a number of questions and since we now have a letter from her doctor that is a "summary update on Hillary Rodham Clinton's health since the release of my previous medical statement July 2015" we can answer some of the general questions and also explain some of the specifics in the letter.

What does the letter really tell us? Not everything and not nothing, there are limits to what a "snapshot in time" can reveal when it comes to forming an accurate picture of an individual's medical status.

First, the public has some big questions.

Do people with pneumonia usually collapse? Not typically, but heat and dehydration can do that when battling an infection as people with pneumonia are usually in bed. However, as Dr. Erika Schwartz noted on KABC’s “Midday Live” “You don’t tend to see the kind of recovery that Mrs. Clinton seemed to exhibit that day,” referencing how Clinton was seen 90 minutes later healthy and in good spirits while leaving the apartment of her daughter Chelsea, where she’d gone to rest after the episode. She has received the Prevnar and Pneumovax vaccines which provide protection against pneumonia and is currently on antibiotics "being treated for mild non-contagious bacterial pneumonia" diagnosed on a CT Scan of the chest. The "contagiousness" of a bug is not determined by this study. Sputum cultures, for example, are needed for certain infections.

What about the cough that has been discussed so often? She had a severe coughing fit on September 5th, which was attributed to seasonal allergies, as were ones she experienced January 25th and February 17th, in Iowa and New York. The prior letter from her doctor specifically stated her allergies are from pollen. She had chronic sinusitis and an ear infection earlier this year for which she was given antibiotics and steroids. A tube was placed in her left ear drum to alleviate fluid and pain. A brain and sinus CT (Cat Scan) in March showed "no abnormalities of the brain and mild chronic sinusitis," according to her internist. There were no symptoms for the next 6 months.

She has slipped and fallen on a few occasions, is it related to her 2012 concussions or just the bad luck we all have without cameras recording it? As we have seen with football players and other people with head injuries, traumatic brain injury does not always just 'go away' but there is no evidence that she is suffering any lingering effects and there is no mention in this letter of her prior concussion.

The new letter does not discuss her history of blood clots (deep venous thrombosis) or her transverse sinus venous thrombosis from 2012. The latter is a clot in a vein in the brain that can impede or obstruct the flow of blood. She takes a medicine called Coumadin, a blood thinner, for this history. Coumadin can cause bleeding if the levels get out of range and Dr. Bardack says this is managed with a hematologist and her blood levels are monitored and the drug adjusted accordingly.

A test was done to quantify her heart risk given her family history and as a follow-up to a 2010 examination. Her results show a low risk of death from coronary artery disease.

The Secretary had a normal mammogram and breast ultrasound.

Secretary Clinton takes a medicine for hypothyroidism, which means an under-active thyroid gland. It is of greater incidence in women, especially as they age. The thyroid regulates energy and metabolism. When someone is symptomatic, they may feel sluggish and have other complaints related to a slowing of metabolism.

Her recent cholesterol levels were listed. Total cholesterol level consists of high-density lipids (HDLs), low-density lipids (LDLs) and triglycerides, a form of fat in the body used as an energy source. Clinton's triglyceride level is 159 up from previous reports, borderline elevated. If too high chronically, then that can be associated with heart disease, diabetes, and fatty liver. In isolation, it is uncertain if meaningful or even fasting - the best way to assess these results. Her LDL (commonly called "bad cholesterol") is 103, in the "near optimal" range. Her HDL ("good cholesterol") is 56, in the high normal range. A high HDL is protective against heart disease.

Clinton's blood sugar (and HgbA1c - a longer measure of sugar) and liver tests are normal as of this letter.

It sounds like a lot but what does this all mean? It's not a complete health history (that would even include information on her pregnancy with Chelsea, for example) and the information revealed is entirely at Secretary Clinton's discretion. Dr. Bardack is ethically bound not to violate the expressed privacy wishes of her patient but she is also responsible for not making false claims, e.g. Secretary Clinton is in good health.

Her physician who personally examined her and has reviewed her entire medical record is the person to determine medical fitness for the office of the President.

Dr. Jamie Wells, MD, FAAP, is a Board-Certified physician and the Director of Medicine at the American Council on Science and Health. This article is reprinted from ACSH. Read the original here.