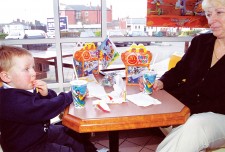 The War on Fast Food hasn't led to the health care bonanza overzealous regulators assured us would result - but that hasn’t stopped them from opening another front on Happy Meals.

At the American Council on Science and Health, we think micromanaging behavior is misguided, but not unexpected. In 2010, as part of the Affordable Care Act, menu labeling of calorie counts became law, but it took four years of heated debates for the FDA to propose the rules for those who’d be affected, as well as how the law would be implemented.

The New York City Council doesn't want to wait until December of 2016, so they have legislation pending that, if passed, would place a calorie limit on McDonald’s "Happy Meals", or other similarly-marketed meals that include toys and/or other promotional materials. Named the “Healthy Happy Meals” bill, it’s similar to one that took effect in San Francisco in 2014. The NYC bill would limit calories in such meals to 500 and as justification, the bill’s supporters are waving around a recent study from American Journal of Preventive Medicine that suggests such an ordinance would reduce calorie intake for such meals by 100 calories.

At face value, calorie restrictions and calorie counts sound like a “no-brainer” in terms of policies that should benefit the health of the public. However, historical and scientific studies suggest that regulating such industries does nothing for public health, and might even harm the consumer in the long run. One justification for labeling menus with calorie counts at fast food establishments was that surveys indicated that consumers are fairly clueless about calorie content of most food. But providing this information has repeatedly shown that it does not affect their eating practices. Currently calorie counts are required in some cities and that allows us to compare these cities to neighboring ones that do not have such laws.

Speaking to the ineffectiveness of the law itself, instead of altering its Happy Meals in response to the new legislation, McDonald’s restaurants in San Francisco changed how the meal was sold. Toys were taken out of the Happy Meal, but a customer could purchase the toy for an additional 10 cents; the dime was then donated to the Ronald McDonald House Charity. It is not a stretch to believe that, if forced, McDonald’s et al. would do something similar in New York City, negating any supposed health benefits for the city’s kids.

The industry response in San Francisco points out the larger problem in these types of regulation scenarios: costs are passed onto the consumer. Despite its poor nutritional value, many lower-income parents choose fast food because its the cheapest and easiest way to feed their family. Raising food costs will only further stretch already-tight budgets.

Currently, nutritious food is expensive, but it doesn’t have to be. Crops can be genetically engineered to be both healthier and cheaper to grow (and therefore cheaper to buy) but needless government regulation is holding back the potential of this technology. Despite the overwhelming evidence of their safety a recent survey showed that it takes $136 million and 13 years to bring a GMO crop from discovery to market. These numbers border on cost prohibited for many companies particularly small ones.

If law makers want to make healthy options more affordable and more accessible to Americans they should focus on reducing those numbers.