Anne Schwartz
In recent years the citrus industry has suffered a dramatic decrease in production. The iconic Florida citrus industry is in a disease-induced decline, ravaged by a pathogen that has cut the production to half of what it was only a decade or so ago.

Why is This Happening?

This devastating decline in production is the result of a disease called Huanglongbing (HLB), or Citrus Greening. The disease has been detected in all Florida citrus-growing counties and now has spread throughout the south and into citrus-growing regions of California. HLB is one of the most serious citrus diseases in the world and is currently without a cure. The symptoms of HLB arise from an infection from a bacterium known as Candidatus Liberibacter asiaticus (CLAS). The bacterium is transmitted by the Diaphorina citri Kuwayama, commonly referred to as the Asian citrus psyllid.

History of the Asian Citrus Psyllid

The Asian citrus psyllid is an insect that resembles a small grain of rice. Both the insect and the bacterium originated in India or Asia and subsequently spread around the globe. Today, the psyllid can be found in Asia, Afghanistan, Saudi Arabia, North America and parts of South and Central America. The first Asian Citrus Psyllid in the United States was found in Palm Beach County, Florida, in 1998. Thereafter, the first confirmed case of HLB was reported in Miami-Dade County, Florida, in 2005.

The insect is found throughout Florida and has made its way all the way to California where it threatens the fresh fruit industry.  This is not a single, solitary insect like a mosquito. When citrus trees are producing new foliage, large numbers of psyllids reside on the trees. 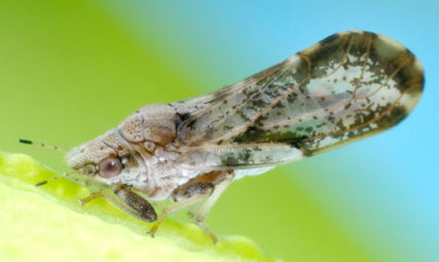 The Asian citrus psyllid is the means by which CLAS moves from tree to tree. The psyllid feeds on an infected plant, and then transmits the bacterial infection wherever it feeds for the rest of its life. The psyllid introduces CLAS into the vasculature of uninfected trees as it feeds on citrus leaves. The bacterium then slowly spreads throughout the vascular system of the tree, preventing the flow of sugar and minerals. The tree spins into a slow decline, becoming less and less productive and eventually dying in as few as five years.

After feeding on a leaf and spreading the bacterium, a female psyllid will lay between 300 and 800 eggs. Shortly after hatching, nymphs will begin to feed in the same area and immediately are anointed as vectors of the disease. Bacteria-carrying psyllids move easily from tree to tree within a grove and can be unknowingly transported to a new area when trees are shipped from nurseries.

The disease is insidious because of its slow symptom presentation. After a tree is infected, it may not show symptoms of HLB for years. As the disease spreads throughout the tree, one of the distinctive foliage symptoms is blotchy mottling of the leaves and yellowing of leaf veins and shoots. Furthermore, fruit from infected trees is often small, misshapen and tastes bitter or sour.

Currently, there is no known cure for HLB. However, integrated pest management techniques can be implemented to help lessen the damage caused to citrus. The first step to reducing the spread of HLB is to control psyllid populations. Although there are no pesticides that can completely eradicate psyllids, the use of systemic insecticides can help prevent psyllids from damaging young trees. Once a tree has been infected, the risk of HLB transmission can be reduced by removing and destroying the effected tree.

The development of Citrus Health Management Areas (CHMAs) illustrates the necessity and effectiveness of cooperation when it comes to managing the spread of HLB. CHMAs are groups of commercial citrus groves in close proximity where growers work together to combat HLB by coordinating psyllid control sprays. By synchronizing sprays, growers can limit the movement of psyllids between neighboring groves and lower the chance of rapid re-infestation shortly after a spray, thereby reducing the need for repeated insecticide application.

Another tool to aid in the control HLB may be RNA interference (RNAi). It has been shown in the laboratory that RNAi can be used to silence key genes within the psyllid that contribute to its development or even insecticide resistance. For example, insect resistance to neonicotinoids happens when specific enzymes, encoded by CYP4 genes, are produced to break down the insecticide. RNAi can stop the production of these enzymes by silencing the CYP4 genes and reverse the psyllid’s insecticide resistance.

Alternatively, RNAi can be used to target the psyllid itself. Researchers have identified several genes that are essential to psyllid wing growth and development. RNAi can target these specific genes in young psyllids and alter their wing formation as they mature. The result is mature psyllids incapable of flight and therefore unable to spread HLB to surrounding trees.

Additionally, psyllid populations can be diminished by introducing Tamarixia radiate, a small parasitic wasp imported from Southeast Asia. The wasps feed on psyllid nymphs, killing them before they are able to spread HLB.

As HLB continues to run rampant throughout citrus groves, researchers are diligently working to develop innovative solutions. New technologies to cure HLB encompass a variety of techniques including using reflective mulch to impair psyllids’ ability to find trees and heating infected trees by enclosing them in plastic tents in order to slow psyllids.

There is no question that as new genetics, production techniques, and technologies fight back against the disease, control of the insect vector will always be a concern. Any new remedy will be prone to eventual failure due to the rapid evolution of the pathogen and vector.  By eliminating or controlling the insect that spreads the disease, solutions will remain durable for a longer time.