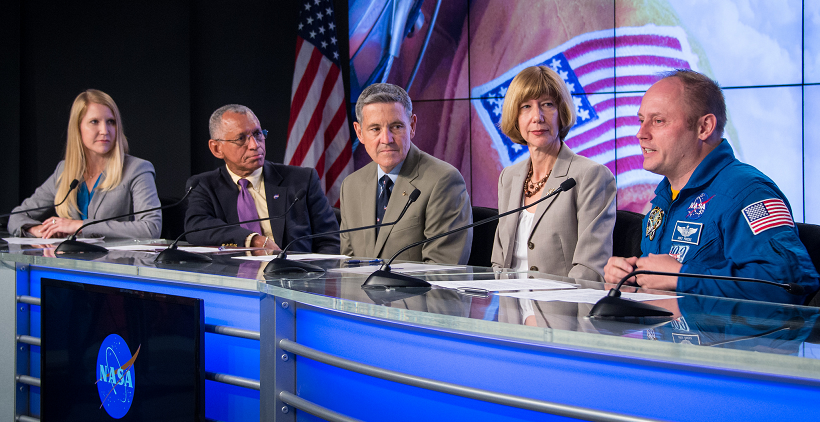 America is one giant leap closer to get back as a big-time spacefaring player. NASA's decision on Tuseday, announcing the winners of Commercial Crew Transportation Capability (CCtCap) contracts gave the nation a much awaited proof that launching humans to space from U.S. soil is only a matter of time and America is back on track with only on lap to go, a straight one without any obstacles. Thus, a nationwide reaction was enthusiastic and full of hope, as we listen to politicians, space foundations and societies. "This is a good day for our nation's space program and for all Americans,” said House Science, Space and Technology Committee chairman Lamar Smith. "I look forward to the time when we once again launch American astronauts on American rockets from American soil." Other Congress members also shared the enthusiasm: "I am encouraged by today’s announcement as it will allow NASA, Boeing, and SpaceX to complete development, testing and certification of the needed capability," remarked Science, Space and Technology Committee member Eddie Bernice Johnson. “I offer my congratulations to Boeing and SpaceX and wish them success in carrying out this phase of the Commercial Crew Program (...) We must continue to dedicate ourselves to our Nation’s space program. The next generation of Americans is counting on us,” said Donna F. Edwards of the same Committee.

Congressman Steve Stockman applauded the efforts by both companies in building the next generation of spacecraft to transport astronauts to the International Space Station. “Boeing has been building spacecraft since the dawn of the space age, and I am excited to see their spacecraft selected in this competition. Space X has created an exciting space industry from scratch, which is bringing the satellite launch market home to the United States, and we will see more exciting commercial space ventures from them in coming years,” he said.

NASA decision is an important step according to the American Institute of Aeronautics and Astronautics (AIAA). AIAA Executive Director Sandra H. Magnus said in a statement: "AIAA commends NASA’s important next step as it continues on a stable path to commercial crew transportation. I am sure that the selection process was particularly difficult, given the three excellent proposals put forward from SpaceX, The Boeing Company, and Sierra Nevada. This commitment means that our nation will once again have the capability to put astronauts in orbit."

It's also a major step for the Commercial Spaceflight Federation (CSF). “With this award, we are one major step closer to restoring our nation’s ability to launch U.S. astronauts to the ISS from American soil,” stated CSF President Michael Lopez-Alegria. “NASA’s Commercial Crew Program is developing safe, reliable transportation to low-Earth orbit through the use of innovative contracting mechanisms. NASA’s selection of two companies demonstrates its prudent commitment to both competition and operational redundancy. With these commercial companies developing transportation for astronauts to and from Low Earth Orbit (LEO), NASA can focus more of its resources on deep space exploration.”

“The Commercial Crew Program is the quickest and most cost-effective way to get our astronauts flying again in U.S. vehicles,” stated CSF Chairman Frank DiBello. “However, the beauty of the commercial space industry is in its diversity. While these companies work to restore crewed LEO transportation capabilities, other companies are working to grow those and other markets in space. CSF congratulates NASA on the awards and we look forward to supporting the next steps in the new space era.”

The Space Frontier Foundation (SFF) congratulated Boeing and SpaceX on their selection as the next U.S. human spaceflight providers, and declared victory in a 20-year-long battle to open the space station transportation market to commercial services. SFF also congratulated NASA for ensuring a competitive marketplace while setting an aggressive timetable for the return of U.S. human spaceflight capabilities.

The National Space Society (NSS) also praised the decision. NSS Executive Vice President Paul Werbos summed up the situation: “This is a great moment for Boeing, SpaceX, and NASA. The door to the American future in space is opening wider, and we need to ensure that Commercial Crew is fully funded to keep it that way.”

But what about another side of the decision, a side that could loose a lot? NASA currently pays Moscow $70 million for every astronaut carried into space by Russian Soyuz capsules, according to the latest deal signed last year and in effect until 2017. Congressman Stockman warned of increasing tensions with Russia over Ukraine: “I urge both companies to find ways to launch a year earlier than planned, to counter any potential threats by Russia against launching our astronauts.”

Russian chief analyst at GLONASS Union, Andrei Ionin is convinced that it will take a long time to complete the project to launch spacecraft with American astronauts into orbit from US soil. "It's important to understand that the implementation of the new American pilot project will be completed not by the end of 2017, as it has been announced, but in 2018-2020 at best. That's if everything goes according to plan, with no accidents," he said.

The expert noted that, despite the fact that the United States has developed the partially reusable Dragon cargo spacecraft, to create a crewed version will be much more difficult.

"In the USSR, the development took a reverse course: the Soyuz crewed spacecraft, legendary in its reliability, was created first, and then, based on that, the Progress expendable cargo spacecraft was developed," Ionin recalled.

Having the current reliance on Russia in mind, Chairman Lamar Smith emphasized that: "The days of paying Russians $70 million per astronaut for access to the International Space Station must come to an end as soon as possible. I look forward to working with these companies and NASA, to end our reliance on foreign carriers by ensuring safe, reliable, timely, and cost effective transportation to the International Space Station."