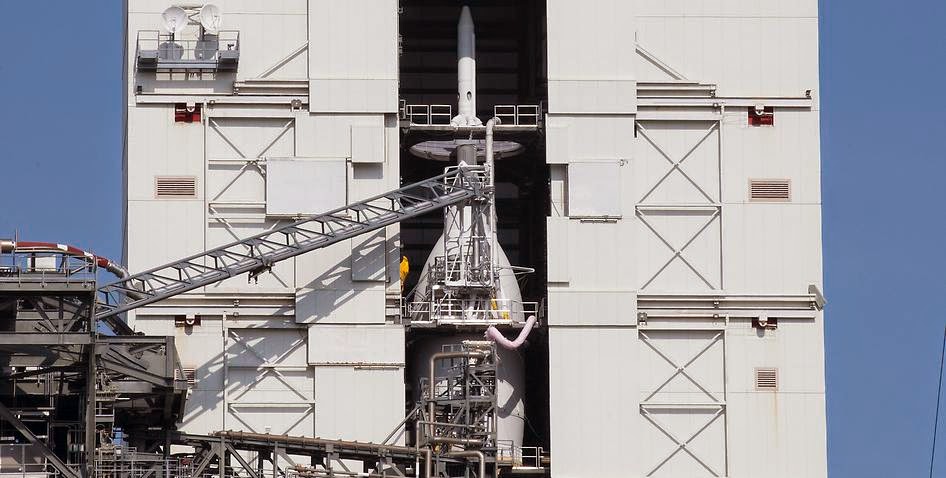 America embarks on a long-lasting trip to Mars this Thursday. Orion’s maiden flight, Exploration Flight Test-1 (EFT-1), slated to test spacecraft’s crucial systems is a critical first step on our journey to destinations beyond Earth never before visited by humans, like asteroids and Mars. “Everyone is very excited about this mission,” Stephanie Schierholz, NASA spokesperson told me. “Orion’s flight test is a critical step on NASA's journey to Mars.” In the future, Orion will launch on NASA’s new heavy-lift rocket, the Space Launch System (SLS). The rocket will be capable of sending humans to deep space destinations such as an asteroid in the 2020s and eventually the Red Planet.

During the 4.5-hour flight, Orion will orbit Earth twice, covering more than 60,000 miles (96,600 kilometers) and reaching an altitude of 3,600 miles (5,800 kilometers) on the second orbit. (The International Space Station orbits Earth at an altitude of approximately 260 miles, or 420 kilometers.) “Orion will reenter the atmosphere at speeds of 20,000 mph and experience temperatures of about 4,000 degrees Fahrenheit before splashing down in the Pacific Ocean about 600 miles southwest of San Diego,” Schierholz said. Those temperatures – about 80 percent as hot as Orion would experience returning from lunar orbit – will provide the most challenging test currently possible.

The test will provide critical data needed to improve Orion's design and reduce risks to its future crews. “The flight test basically is a compilation of the riskiest events we’ll see when we fly astronauts in Orion. The test will stress systems critical to safety, including the heat shield, parachutes, avionics and attitude control, to help us learn as much as possible before Orion carries astronauts on missions to explore an asteroid and on the journey to Mars,” Schierholz pointed out. “The best testing we can do of Orion is to fly it in space.”

Orion will launch atop a Delta IV Heavy rocket from Cape Canaveral Air Force Station's Space Launch Complex in Florida. The lift off is planned at 7:05 a.m. EST, on a 2 hour, 39-minute launch window.

Five minutes after the launch, the first stage of the Delta rocket will separate from the rest of the vehicle, while the second stage will continue on with Orion. 2 hours into the flight the second stage will complete its engine burn, sending the spacecraft on its way to its peak altitude of 3,600 miles that will be reached approximately 3 hours and 5 minutes after lift off. It’s worth noticing that the spacecraft will be farther than any vehicle built for humans, has been in more than 40 years. Minutes later, Orion will separate from its service module and the Delta IV Heavy. 4 hours, 15 minutes into the mission, during the re-entry, the spacecraft will experience the hottest period of its return through Earth’s atmosphere, with its heat shield experiencing temperatures near 4,000 degrees Fahrenheit. After the splashdown in the Pacific Ocean, Orion will be recovered by a combined NASA and U.S. Navy team that will attach Orion to cables that will pull it into the flooded well deck of the USS Anchorage.

“After we recover the capsule, we’ll refurbish it for use in the ascent abort 2 test, the next test for the launch abort system,” Schierholz revealed. She also said that the Orion Program will be working toward Orion’s Key Decision Point C, which is a programmatic milestone that provides approval to move from formulation to development for the Critical Design Review. “After both those are completed, we’ll move toward the first integrated test flight aboard the Space Launch System, Exploration Mission-1 (EM-1),” Schierholz added.

During the EM-1 mission, an uncrewed Orion will travel 40,000 miles beyond the moon to a stable point where an asteroid will be relocated in the future. Thursday’s flight will without any doubt provide many crucial data for EM-1 and future manned missions. “It will reduce risks for the integrated SLS/Orion configuration by providing information on structural and environmental loads; vehicle stability; guidance, navigation and control and separation dynamics between the launch vehicle and the integrated stack,” Schierholz added.