I was amazed to read this very recent, breakthrough research by Australian researchers into the potential cause of 90% of Motor NeuronDisease in humans, otherwise known as MND or Amyotrophic Lateral Sclerosis (ALS ). It was reported in this Australian Broadcasting Corporation (ABC) article on September 26th 2013.

The ABC article and accompanying video interviewed lead author Dr Rachel Dunlop, from the University of Technology Sydney who claimed that the findings will bring scientists ‘a step closer to understanding motor neurone disease’. The interview revealed how it has been discovered that 90% of people in the World currently suffering from MND, ALS and Lou Gehrig's Disease who have died from this disease in the past, have possibly developed it after exposure to neurodegenerative toxins that are released by blue green algae cyanobacteria.

"We think [the cause is] a toxin that's found in blue green algae and can get into all kinds of food stuffs, into fish, into crustaceans, into seeds of trees," Dr Dunlop said.
"It can move through the food chain and bio-concentrate and when people are exposed to it, it seems to be able to trigger motor neurone disease in some people.
"It's fascinating. The algal toxin actually mimics an amino acid that humans use to make their own proteins, and if its in your body at the time, it can trick yourselves into thinking it's the one that you normally use.”
"Then when it gets into your proteins it can prevent them from folding and functioning properly, and that can lead to toxicity."

Dr Dunlop said that the research originated from her colleague Dr Paul Cox's observations in Guam, 'where the indigenous population has between 50-100 times more motor neurone disease than the general population'. This research has been published in the journal PLOS ONE at http://www.plosone.org/article/info%3Adoi%2F10.1371%2Fjournal.pone.0075376

"He discovered that they were eating fruit bats and when he went and looked at what the fruit bats were eating, he found they were eating the seeds of the cycad tree," she said. "He scratched around in the roots of that tree andfound that blue-green algae which also grows in the ground, not just in water,was actually growing as part of the roots of that tree." ‘The breakthrough might also help develop a treatmentfor the fatal condition, she says.’

"The discovery that we found might help us to design a therapy to stop it getting in to people's proteins," she said. "[It suggests that] if we could flush it out by giving people lots of the human version, then we can maybe stop this condition from occurring."
‘Dr Dunlop says clinical trials have started using the research to help find a treatment for the condition.’

My own quick research taken from this Australian NSWGovernment article called ‘What Causes Algal Blooms’ explains the causes of a big increase in toxic global blue-green algae blooms worldwide and also explains that ‘the major route for human exposure is through consumption of seafood and shellfish as some species produce potent toxins that can be accumulated in fish and shellfish. Even low densities of toxic algae maybe sufficient to cause illness or death in humans, while some species can selectively kill fish by inhibiting their respiration.’

‘Nutrient fluctuations as a result of anthropogenic changes can also influence the presence of algal blooms and species succession and may even influence when toxins are generated. Marine blooms may threaten fish resources, human health, ecosystem function and recreational amenity of beaches and bays.'

Although the distribution of marine and estuarine algae is uncertain in Australia , the number and intensity of marine algal blooms is believed to be increasing world–wide due to:

According to this US government website people are also taking blue-green algae health supplements such as Spirulina for which the US Government has alreadyidentified some potentially serious health and safety concerns :-

“Blue-green algae” describes a large and diverse groupof simple, plant-like organisms found in salt water and some large fresh waterlakes. Blue-green algae products are used for many conditions, but sofar, there isn’t enough scientific evidence to determine whether or not theyare effective for any of them.Blue-green algae are used as a source ofdietary protein, B-vitamins, and iron. They are also used for weight loss,attention deficit-hyperactivity disorder (ADHD), hayfever, diabetes, stress,fatigue, anxiety, depression, and premenstrual syndrome (PMS) and other women’shealth issues.’

‘Some blue-green algae products are grown under controlled conditions. Others are grown in a natural setting, where they are more likely to be contaminated by bacteria, liver poisons (microcystins) produced by certain bacteria, and heavy metals. Choose only products that have been tested and found free of these contaminants.You may have been told that blue-green algae are an excellent source of protein. But, in reality, blue-green algae is no better than meat or milk as a protein source and costs about 30 times as much per gram.’

Research published in the open access journal PLOS ONE and reported here by the Motor Neurone Disease Association (mnda) further expands on the link between the blue green algae neurotoxin BMAA and MND or ALS.

A toxin known as β-N-methylamino-l-alanine (BMAA), which is found in blue-green algae, has been shown to cause proteins inside cells to clump together and cause cell death.
This finding suggests that BMAA may be a cause of neurodegenerative diseases like Alzheimer’s and MND and could lead to the development of new treatments.

What is BMAA?
BMAA is a non-protein amino acid. This means, that unlike the 20 amino acids that our bodies use to make proteins, it does not make a human protein. BMAA is found in a type of bacteria called Cyanobacteria (more commonly known as blue-green algae), which are usually found in waterways as well as damp soil and on the roots of cycad plants.

Blue-green algae can occasionally cause algal blooms. This is when there is a rapid growth of organisms due to high levels of nutrients in the water. The resulting bloom can sometimes become so large that it can be toxic to wildlife.

The researchers found that when high concentrations of BMAA are present in neuron-like cells BMAA substituted itself with the amino acid L-serine during protein formation, creating a faulty protein within the cell. The faulty proteins were found to change shape so that they could no longer perform their role within the cell, causing them to clump together. The researchers also found that once BMAA was substituted into the protein this caused the cells to die.

This study further adds evidence to the role of BMAA and how it can cause proteins to clump together (which is a common hallmark in a number of neurodegenerative diseases).

The researchers stated that: ‘Our finding that BMAA can be misincorporated  (substituted) for serine in human proteins raises the possibility that such misincorporation results in neurodegenerative illness.

My own mother had MND and sickened very quickly, she then died tragically at her own hands when she could no longer breath voluntarily, after contracting this very cruel and debilitating disease in 2009. Like me she was extremely fond of shellfish and seafood and ate it very regularly. Here is an old photo of her and me, the very fat baby!

She was English but she emigrated to Australia to be close to her children and grandchildren and she lived nearby in Ballina, on the beautiful NSW coast, surrounded by vast expanses of both saltwater beaches and freshwater lakes, rivers and estuaries and their occasional blue green and other algal blooms. I’m confident that she didn’t take any blue-green algae spirulina supplements but she loved eating fish, crab and lobster. She may have had the genetic predisposition to contract MND or ALS from exposure to blue-green algae, which I and my children may also have inherited. 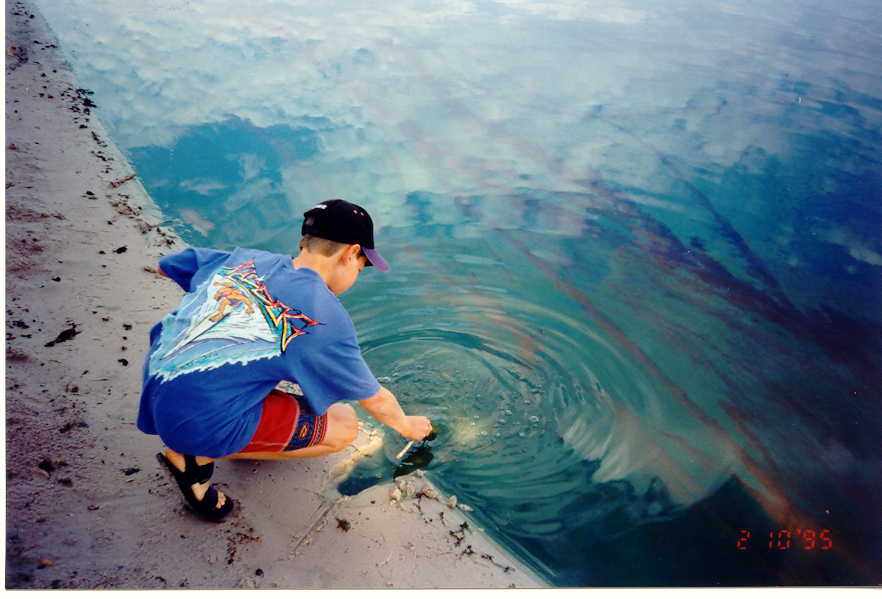 It appears that this anthropogenically caused increase in blue-green algal blooms worldwide, could be found to be primarily responsible for the big increase in MND and ALS and possibly some of the other neurodegenerative diseases currently increasing all around the world. Neurotoxic blue green algae or β-N-methylamino-l-alanine (BMAA) is being accidentally consumed by many people in their seafood, crustaceans. freshwater fish and even in some of their health supplements. Could BMAA also be present in other animals that we eat or in our drinking water supply and how often are we swimming in it or accidentally swallowing it while we are playing in the surf?

The algal blooms are often clearly visible but the microscopic blue-green algae are still often present in the absence of visible blooms and are very difficult to manage or even remove completely from contaminated water. According to this DPI NSW government website called 'Managing Blue Green Algae in Farm Dams' they can still be toxic even after they have been killed by algicides which can't be used in rivers and lakes.

Here are some disturbing images of adults and children ignoring the many highly visible, toxic, blue green algae warning signs erected by Ballina Council in 2014 and continuing to swim and canoe in Lake Ainsworth on a daily basis risking some appalling long and short term health consequences:- 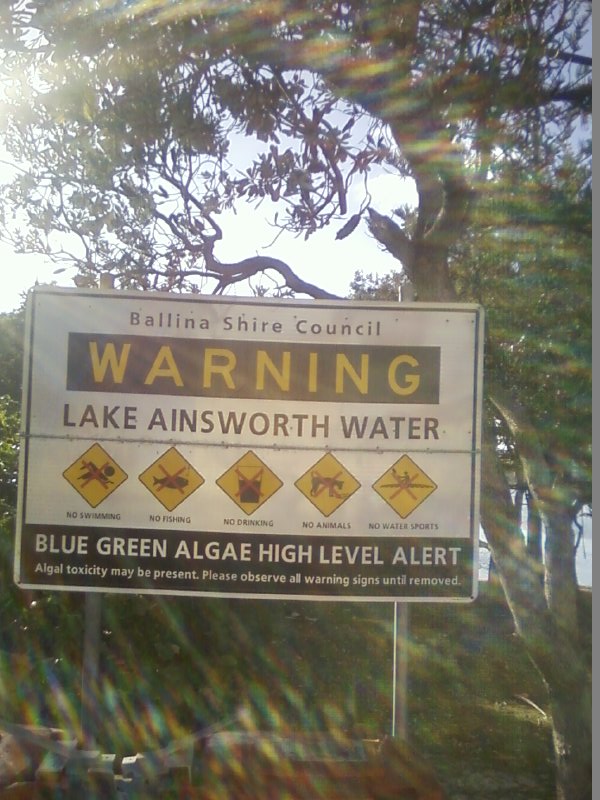 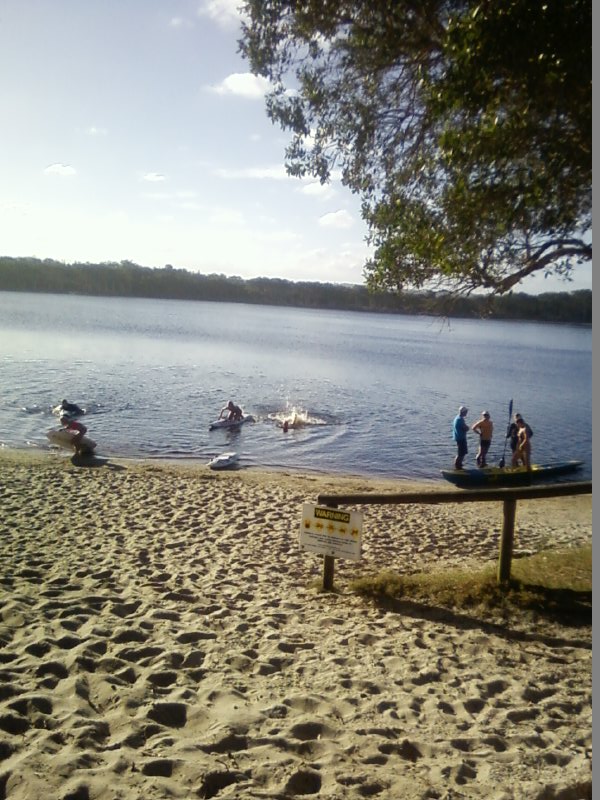 We're proud to announce a new collaboration between UTS and MQ scientists in the search for environmental triggers for MND.

Blue green algae (correctly known as cyanobacteria) are most commonly associated with nutrient run-off in coastal waters and produce a neurotoxic amino acid called BMAA.
The evidence for algal toxins being a risk factor in triggering MND has been studied overseas for many years, including on Guam where it was reported that consuming fruit bats with high levels of BMAA was linked to a 50-100 times greater incidence of MND.

Consuming large amounts of seafood that grows in waters contaminated with blue green algae has also been identified as a risk factor for MND, in particular mussels, crabs, prawns, lobsters and, shark fin. BMAA has also been found in the brains of patients who died from MND and Alzheimer’s disease.

The environmental studies were initiated over the Australia Day long weekend, when Profs Rowe and Guillemin from MQ began interviewing MND patients in the rural NSW town of Griffith and taking samples for analysis. As a team, we will now be extending our studies to other MND hot spots in Australia with the aim of confirming the presence of BMAA in the Australian environment and then acquiring a better understanding the risks from exposure to algal toxins.

Good luck Dr Rachel Dunlop and team with your research, it is long overdue in Australia. Hopefully you will be investigating clusters that are occurring around Ballina, Emigrant Creek Dam and River, Lake Ainsworth at Lennox Heads and Baywood Chase Lake at Suffolk Park close to Byron Bay near to where I live?