“Probably the first fMRI study to analyse the neuroanatomical correlates of telepathy.”

They asked Mr. Gerard Senehi (his brain pictured at right)

“… well known for his abilities to perform various paranormal tasks such as telekinesis, mind reading and telepathy” 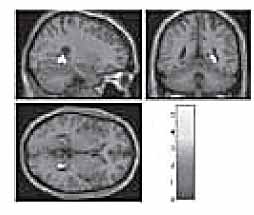 to try to reproduce an unseen sketch which had been drawn by the experimenter. An anonymous control subject was also tested. During their attempts, both individuals were continuously scanned in an fMRI machine. The researchers found that -

“The image reproduced by the ‘mentalist’ showed striking similarity to the original drawn by the experimenter.”

- whereas the drawing by the control subject did not. Furthermore, say the experimenters, the fMRI scans showed measurable differences in brain activity of the two subjects. And leading to the conclusion -

“This study’s findings are suggestive of an association between telepathy and the right parahippocampal gyrus.”

Experimental Notes:
1) Both the subjects were scanned on the third day of the lunar cycle and at the same time of day (1400 hours IST) separated by a three month interval.

2) “. . .examination of just one control subject is a limiting factor.”