We are often told how bad it is to keep sitting at the computer, but one good outcome at least is how some much interesting science news comes one’s way.  One item dated 19 October 2015 from Radboud University (Nijmegen, the Netherlands) states:

Anaerobic ammonium-oxidizing (anammox) bacteria are known for their ability to convert ammonium into nitrogen gas without using oxygen. The chemical compound hydrazine, also used as rocket fuel and the strongest reductant on earth, is central in this process. An international team of microbiologists, including Boran Kartal from Radboud University, now describes the protein that synthesizes hydrazine in anammox in full detail.

As with many such items, it shouts as if this happened Only Yesterday (not to be confused with the Japanese film of the same name.)  However, looking up Anammox on Wikipedia shows that this harks back to a discovery made by researchers at Delft University of Technology in 1999, and published in

Anammox, an abbreviation for ANaerobic AMMonium OXidation, is a globally important microbial process of the nitrogen cycle. The bacteria mediating this process were identified in 1999, and at the time were a great surprise for the scientific community.

Anyway, these bacteria are being developed at Radboud as a cost-effective and environmentally friendly way of reducing molecular nitrogen content in wastewater — think of all those EU regulations concerning water quality!  Alas, one of the chief researchers does not see this as a way to cheaper rocket fuel, at least not with our current understanding.

But this story brings to mind an organism, first seen in the Gunflint Chert, rocks dated to roughly two thousand millions years old, and found along the northern shores of Lake Superior.  It is named Kakabekia after the Kakabeka Falls in Ontario, which I remember from my one trip across the Atlantic in 1978.  I was impressed by them, but did not realize at the time how old those rocks were.  (Picture by Stefan Fussan.)

Very similar organisms were discovered in 1964 at Harlech Castle in Wales, and were cultured and described in:

On the Culture of a Microorganism Similar to the Precambrian Microfossil Kakabekia Umbellata Barghoorn in NH3-Rich Atmospheres.

When remember that I first read of this in the New Scientist, it was said that they were found in a urinal.  Some people may have dismissed that part as an ‘urban myth’: however, I have found this in the original paper:

Harlech Castle is frequented by tourists, many with small children.  It is not uncommon for the soil near the castle walls to receive relatively copious quantities of human urine, an excellent source of ammonia, during the course of the holiday season.  Hence, soil in the area sampled may have been exceptionally well provided with ammonia for many generations.  In historic times, when the castle was garrisoned, it may be assumed that comparable sources of ammonia were available.

There are now several catalogued living species of Kakabekia, one at least found in Alaska.

The Earth’s atmosphere in Gunflint Chert times would have been by today’s standards very poor in oxygen, even though Stromatolites would have been at work.  Nevertheless, here we have two survivors of early forms of nitrogen metabolism.  Kakabekia may be relatively ‘on the margins’ as a kind of ‘living fossil’, but those bacteria seem to be massively important, preventing our whole planet from smelling like a ‘House of Metabolic Transmigration’, to take an expression (translated) from  Journey to the West, a famous and popular classical Chinese Novel.

And here is Harlech Castle, from Cadw. 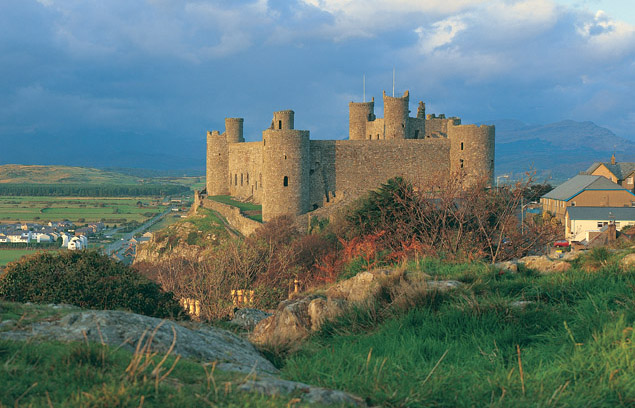