Robert H Olley
During the morning of last Monday (28th September) in Europe and Africa, or the evening of the 27th in the Americas, we were treated to the spectacle of a total eclipse of the Moon, a so-called ‘supermoon’ because the Moon appeared a little larger than usual near its perigee, the point closest to Earth in its elliptical orbit.  With the help of the British magazine Astronomy Now, helpful because along the with Daily Mail it was one of the few sources that gave the event timings in British time correctly, I set out to photograph it.

With the song If it Wasn’t for the Houses in Between going through my mind, I found a spot where I could put my tripod, and started taking pictures during the partial phase beforehand.  With my bridge camera, though, I found that the light reflected from the eclipsed part was rather too faint to get a decent picture (see Orion Through The Camera — But Which Type?) because of the small sensor.  However, there are two moments I would like to share with you all.

The first is at the end of totality, where an observer standing on the ‘left hand’ limb of the moon (slightly offset from the exact western limb because the path of the eclipse is not central) would start to see the sun emerging from behind the Earth.  This is true in way not associated with a solar eclipse, because from the Moon the Earth appears to stand still in the sky, whereas the Sun would be seen slowly moving throughout the Moon’s daytime which lasts 14 Earth days.

These two pictures are taken three minutes apart.  In the first, the Sun has not officially risen as viewed from the Moon, although the red atmospheric ring round the Earth would, through reaction, be showing something like a “diamond ring effect”.  Three minutes later, and the western limb of the Moon has brightened spectacularly, and the theme from 2001 — a Space Odyssey is going through my mind. 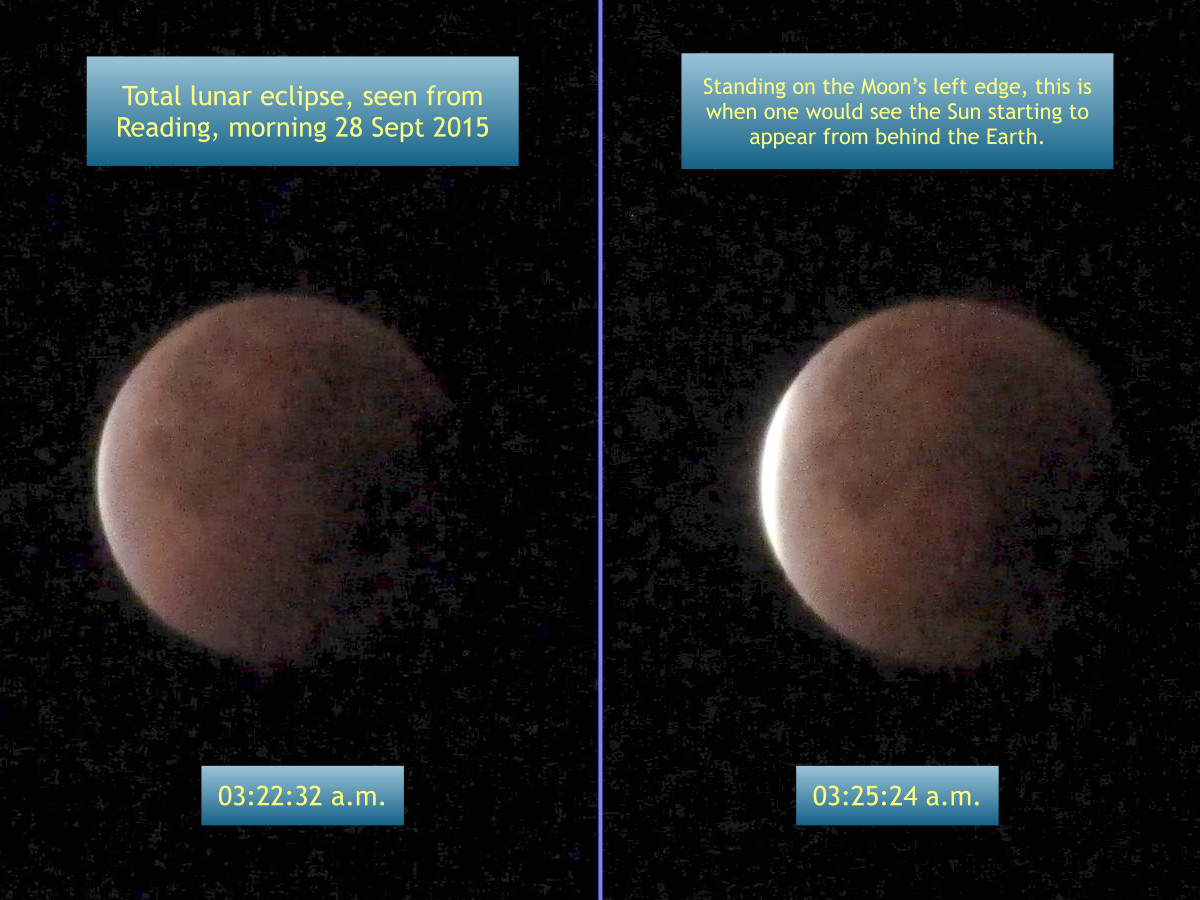 About a hour later, and totality is just finished.  Because the angular diameters of the Sun and Moon as seen from the Earth are quite similar, the Sun will be fully risen at the left-hand limb of the moon roughly at the same time as it is starting to rise at the right hand (approximately eastern).  The camera is very suitable for displaying the variations in brightness across the Moon at this time. 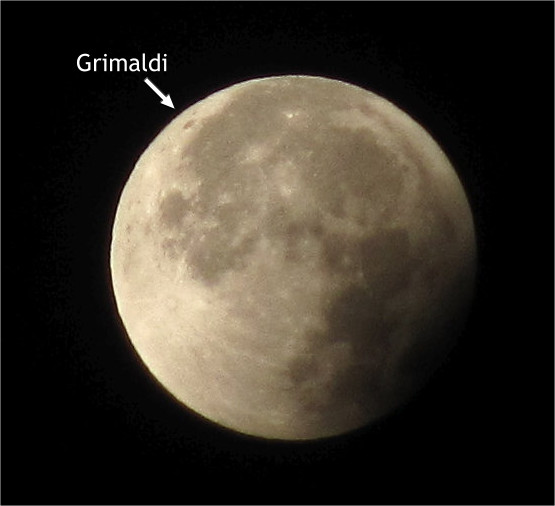 I have marked the prominent dark crater Grimaldi near the western limb.  This is named after a Jesuit scientist who lived shortly after Clavius who featured prominently in the recent Science 2.0 article Jesuits As Science Missionaries.  The MacTutor Grimaldi biography tell us:

[his] Book 1 begins with a description of Grimaldi’s most famous discovery, namely the diffraction of light. . . . Perhaps surprisingly, Grimaldi’s treatise was little read but his important results on diffraction were made widely known by others. A Rupert Hall writes:-

Grimaldi’s experiments and ideas were disseminated by others, not least by the Lyons Jesuit Honoré Fabri (1607-88), a man whose writings, especially those on pure mathematics, were well known. Isaac Newton, by his own affirmation, learnt of the diffraction effect from the first dialogue in Fabri’s ‘Dialogi physici’ (1669).

The darkening of the Moon gave an opportunity to observe the Asteroid Vesta.  The magazine Sky and Telescope, in a listing of this week’s events, had alerted us:

• Vesta, the brightest asteroid, is at opposition. All week it remains magnitude 6.2, easy in binoculars (despite the moonlight) as it creeps through western Cetus.

So during the total phase of the eclipse I took the following photographs.  With the help of the programme Stellarium I located where Vesta should be.  First I took the low magnifaction shot below.  This is a superposition of five frames, each of 5 seconds exposure, to help mitigate the effect of camera noise.  During two of these, an aeroplane was moving across the field of view.  The brighter stars in Pisces (right) and Cetus (left) are identified by their Flamsteed numbers, which in full would be 23 Ceti on the left and 27 Piscium on the right. 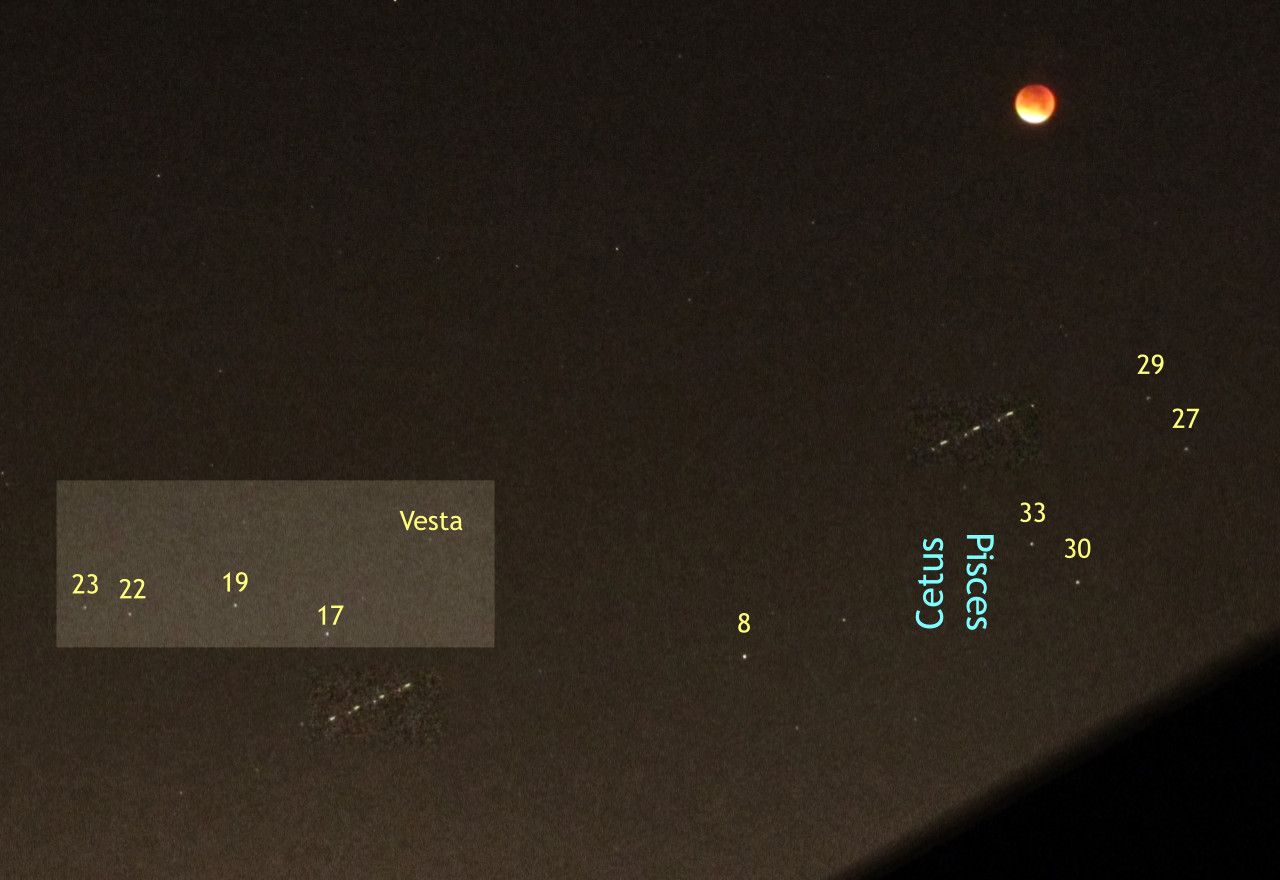 A higher magnification set of frames shows Vesta much more clearly.  The stars φ1 and φ2 Ceti are the same as 17 and 19 Ceti, but using their Bayer designations. 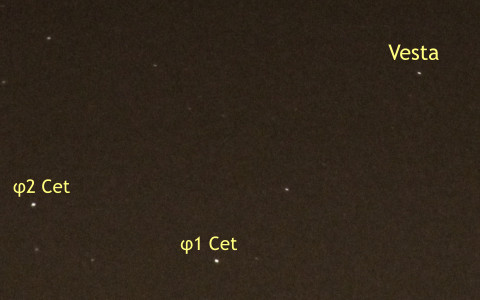 This is the first time I have unequivocally observed an asteroid.