A news release from Heidelberg, In Search of the Origin of Our Brain, treats us to these two pictures:

What are these two little critters?  On the left is Nematostella vectensis, the Starlet Sea Anemone, and on the right is an embryo of the same treated with fluorescent antibodies.  The anemone is effectively a cylindrical creature, with neither right nor left, and no back-and-front.  But in the embryo, the green is concentrated on the “top” side and the magenta on the “bottom”.  The news release tells us:

[[[[
While searching for the origin of our brain, biologists at Heidelberg University have gained new insights into the evolution of the central nervous system (CNS) and its highly developed biological structures. The researchers analysed neurogenesis at the molecular level in the model organism Nematostella vectensis, the Starlet Sea Anemone. Using certain genes and signal factors, the team led by Prof. Dr. Thomas Holstein of the Centre for Organismal Studies demonstrated how the origin of nerve cell centralisation can be traced back to the diffuse nerve net of simple and original lower animals like the sea anemone. The results of their research will be published in the journal “Nature Communications”.

Like corals and jellyfish, Nematostella vectensis is a member of the Cnidaria family, which is over 700 million years old. It has a simple sack-like body, with no skeleton and just one body orifice. The nervous system of this original multicellular animal is organised in an elementary nerve net that is already capable of simple behaviour patterns. Researchers previously assumed that this net did not evidence centralisation, that is, no local concentration of nerve cells. In the course of their research, however, the scientists discovered that the nerve net of the embryonic sea anemone is formed by a set of neuronal genes and signal factors that are also found in vertebrates.
]]]]

In a somewhat earlier paper, the same group showed how gene groups and their associated proteins were associated with the development of symmetry in the organisms.  The simplest Metazoans (multicellular animals) are the sponges (Porifera).  These have only one axis, with a mouth at the top.

But how does the sponge “know” which end is its mouth and which its base?  In simple terms, a gradient is formed in the concentration of the Wnt signalling system, which is represented in the shaded ellipse above.  From the Stanford University Wnt page:

[[[[
Wnt proteins form a family of highly conserved secreted signaling molecules that regulate cell-to-cell interactions during embryogenesis. Insights into the mechanisms of Wnt action have emerged from several systems: genetics in Drosophila (fruit fly) and Caenorhabditis elegans (nematode “worm”); biochemistry in cell culture and ectopic gene expression in Xenopus (clawed toad) embryos. Mutations in Wnt genes or Wnt pathway components lead to specific developmental defects, while various human diseases, including cancer, are caused by abnormal Wnt signaling. As currently understood, Wnt proteins bind to receptors of the Frizzled and LRP families on the cell surface. Through several cytoplasmic relay components, the signal is transduced to beta-catenin, which enters the nucleus and forms a complex with TCF to activate transcription of Wnt target genes (see diagrams of the Wnt pathway).
]]]]
(note: I understand that the W in the name of this system derives from its participation in the wing development of fruit flies.)

From the sponge we move to more complicated creatures. 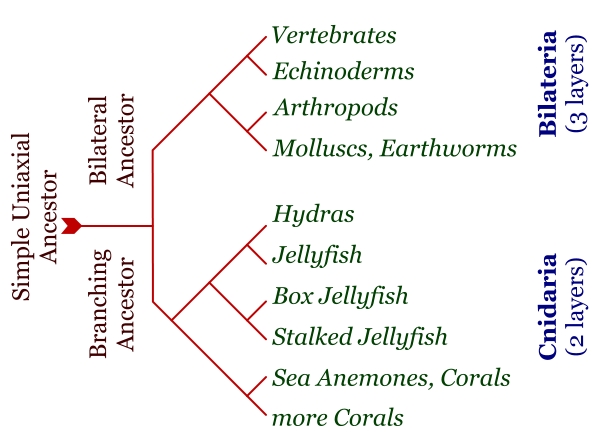 Returning to Heidelberg, we read:

[[[[
According to Prof. Holstein, the origin of the first nerve cells depends on the Wnt signal pathway, named for its signal protein, Wnt. It plays a pivotal role in the orderly evolution of different types of animal cells.  The Heidelberg researchers also uncovered an initial indication that another signal path is active in the neurogenesis of sea anemones – the BMP pathway, which is instrumental for the centralisation of nerve cells in vertebrates.

Named after the BMP signal protein, this pathway controls the evolution of various cell types depending on the protein concentration, similar to the Wnt pathway, but in a different direction. The BMP pathway runs at a right angle to the Wnt pathway, thereby creating an asymmetrical pattern of neuronal cell types in the widely diffuse neuronal net of the sea anemone. “This can be considered as the birth of centralisation of the neuronal network on the path to the complex brains of vertebrates,” underscores Prof. Holstein. 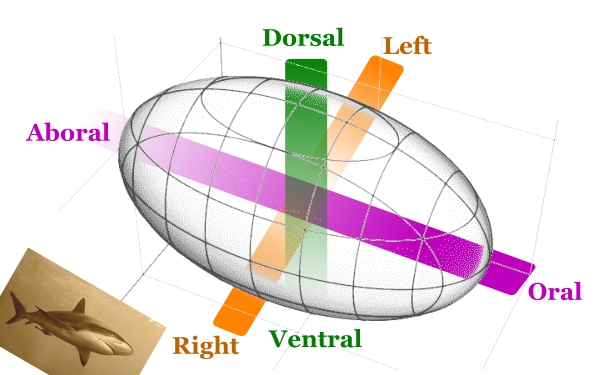 In a publication a few months earlier, the same group were showing how a different pathway produces left-and-right differentiation in Bilateria and Cnidaria.  This, at first, seems to be contrary to geometry.  In Bilateria, simply specifying a back and an abdomen will automatically define left and right: however, this will not of itself imply difference in tissue between the central axis and the flanks.  However, in the ellipsoidal diagram above, while there is a one-way gradient from the mouth to the anus (if there is one) and similarly between the top and bottom of the animal, I have generated a U-shaped gradient in the orange band stretching from left to right.  The brightest colour, on the flanks of the creature, is where fins or legs may develop.  However, the U-shape does not have to be symmetrical, so one can get creatures that develop differently on their right and left sides, for example snails which only have particular organs on one side or the other, though they are paired in other molluscs.  This leads to them curling up into a spiral shell.  A more extreme case is animals like sea urchins, which after a small initial bilateral stage develop only on one side, leading to what is effectively a radially symmetrical creature.

In the earlier paper [2], the Holstein group showed that the system responsible for left-right development (involving beta-catenin again, but with Nodal–Pitx) is the same one that causes Hydras (and presumably sea anemones) to branch into colonies.  They say:

Our data support an evolutionary scenario in which a ‘core-signalling cassette’ consisting of β-Catenin, Nodal and Pitx pre-dated the cnidarian–bilaterian split. We presume that this cassette was co-opted for various modes of axial patterning: for example, for lateral branching in cnidarians and left–right patterning in bilaterians.

However, the system that the group have observed in the sea anemone Nematostella is the one connected with dorsal-ventral (back and belly) development called Bmp, acronym for bone morphogenetic protein.  This is an example of how these systems, Wnt, Nodal and Bmp, turn up in many different developmental features in many different animals.  Even in the same animal they can do one set of things at the embryonic stage and another as the creature matures to its adult form.

Here, we have another member of the Cnidaria, the Box Jellyfish.  These also have a circular nervous system, but also 24 eyes of which 4 are image-forming.  They are, indeed, quite sophisticated predators with a nasty sting.  Remarkable it is, that our central nervous system is connected with such a distant creature. So, if you say “my brain feels like a jelly”, you now have a double meaning to take care of.

And take care of your brain.  As the German poet Heinz Erhardt tells us: