In a piece by Richard Stone in this week’s Science, it was pointed out that in Chinese Museums, it is likely that up to 80% of the marine reptiles on display have been altered or artificially combined to some degree. This seems like a shocking figure, but it is more understandable when it is considered that few of these museums have palaeontologists as staff, and that many of these fossils are unearthed by Chinese farmers that dress their finds up so that a museum is more likely to buy them. Of late there has been a boom, both in the numbers of museums, but also in the acquisition funds set aside for accessioning fossils; this, coupled with prizes for the best specimens, means that finding (or fabricating) a complete fossil can prove to be quite lucrative. This forgery can range from the odd added-in bone here and there, to the whole scale chimeric sticking together of many specimens.

In many cases, these fakes are blatantly obvious. The centerpiece of the Geological Museum of China’s Prehistoric Life exhibit (seen below) is of a striking Triassic ichthyosaur. But when you take a closer look, something is amiss. In the upper part of the specimen, the shoulder girdle and lower jaw can clearly be seen, representing the ventral (belly) side of an organism, whereas lower down, the dorsal (back) surface of the vertebrae are seen; clearly this is several specimens botched together. Chinese museums are riddled with examples such as these, which is a real pain for any researcher in that they have to spend many days separating the real fossil "wheat" from the faked "chaff" -- not to mention the untold damage that has been done to the now palaeontologically defunct specimens. 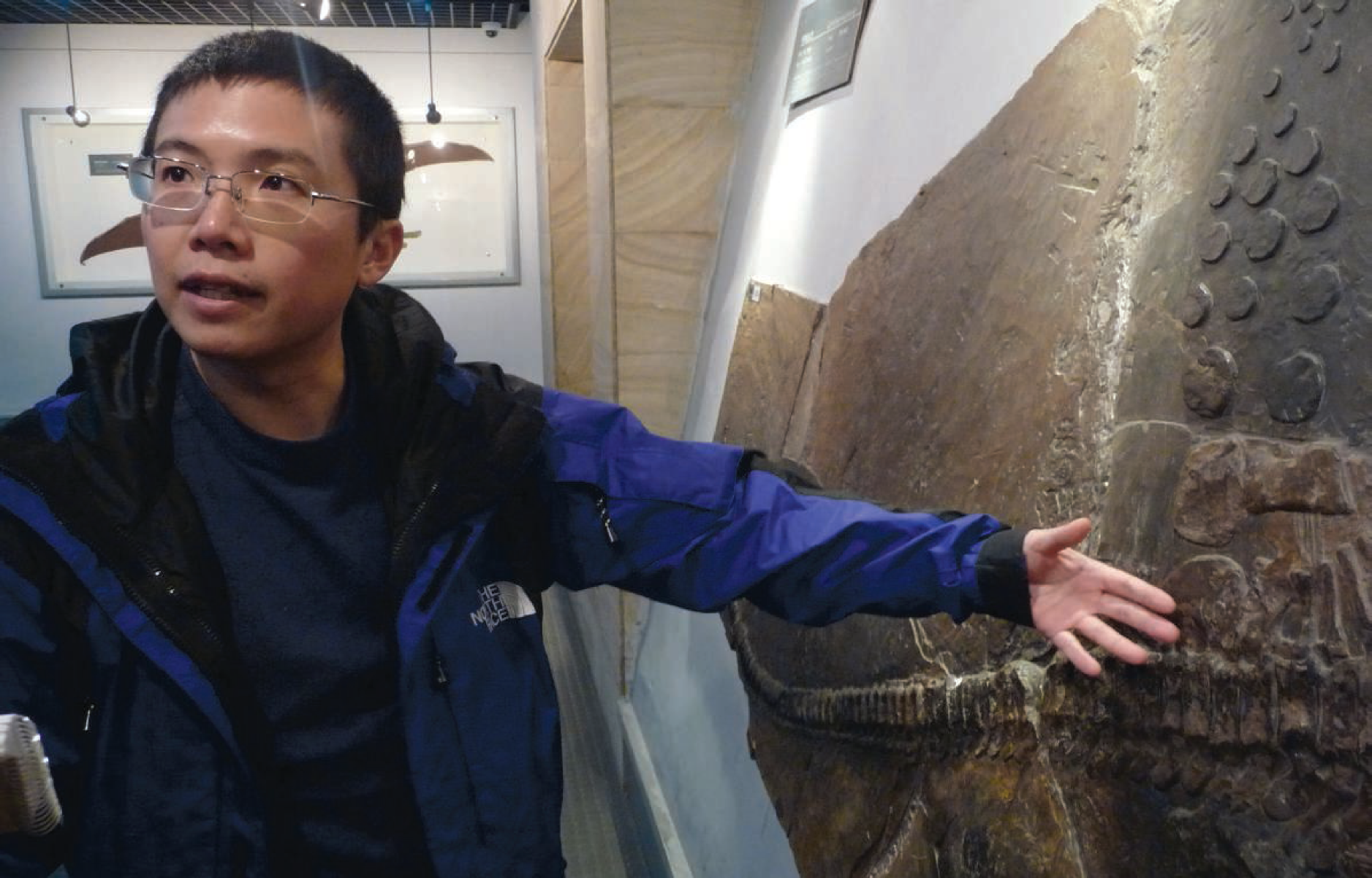 Li Chun with a faked icthyosaur in the Geological Museum of China. You can even see from here that the lower part of the specimen is upside down. Image Credit: Richard Stone

The commercial fossil market is awash with fakes; in fact it can be rather difficult to buy real fossils. Forgers in China have faked pretty much any fossil you like; examples include birds, fish, mammals, dinosaurs, dinosaur eggs, icthyosaurs, and other reptiles - they have a particular penchant for mimicking the sauropterygian Keichosaurus. Although the bulk of faked fossils come from China, this problem is not limited to China. Many of those famous Morrocan trilobites are faked, as are Pleistocene mammal skulls from around the world. Indeed, for anybody that thinks they have ever bought any fossilized amber: unless it came from the Dominican republic it is almost certainly fake. (PaleoDirect have a great emporium of faked fossils at their website.)

Most of these fossils are prepared well enough to fool your average fossil dealer or even museum worker, but can easily be earmarked by a trained palaeontologist. However, occasionally – just occasionally – a hoax fossil slips through the net, and ends up in the scientific literature. These fossils tend to whip up a maelstrom of debate and can incite fierce opinion on both sides, ending up with red faces for many of those involved when they are later revealed to be hoaxes. Thankfully it doesn’t happen very often, but over the next few weeks I'm going to pick up on some of the greats. Acinonyx kurteni was named for a skull found in Late Pliocene deposits and, at 2.5-2 Ma, this makes it one of the oldest cheetahs ever found. First described by
Per Christiansen and Ji H. Mazák early in 2009 in the prestigious journal PNAS, it was excitedly described as the most primitive cheetah ever found, having a unique combination of both primitive and derived traits. The authors went as far to state that this specimen disproves that cheetahs originated in the New World, favouring an Old World origin based on the interpretation of this fossil.

Alas, it was too good to be true. As soon as Deng Tao, a paleontologist at the Institute of Vertebrate Paleontology and Paleoanthropology in China saw the paper, he knew it was fake. Just from from the published pictures, he said that he could see that parts of the skull have been concocted from plaster, (I can't see this myself, but I'll take his word for it). But for Deng, what really gave the game away was a subtle aspect of the morphology; as he explains, “The parietal area is glued by some bone pieces to imitate the skull of a modern cheetah, but the forger did not make the parietal crests".

As yet, PNAS have refused to retract the paper and the authors still stand by their interpretation. They have refused requests to view the skull and have not answered as to where the fossil was sourced from. This is downright dodgy to me, and so I'm inclined to agree with Deng, who has collected from Linxia for over a decade and knows the suspicious characters that prowl the area, and whose opinion is corroborated by Qiu Zhanxiang, a world expert on mammalian skulls.

This fossil makes my list because when it was published it made quite a storm, being published as it was in PNAS, and very quickly was covered in many newspapers. In these modern times, an idea can be cemented in the public consciousness very quickly, regardless of whether it is subsequently retracted or not. Even if this paper had been retracted a month or so later I doubt that it would have been noticed; we can compare this with some of the examples later on in this series. Deng has now decided not to pursue the matter in any case, as he has not been allowed to see the skull itself that lead to the ruckus.

In a way, though, retraction is not tackling the root cause of what lead to this paper being published. There needs to be an extensive training program for fossil preparators, and extensive guidance for those going into the field to collect. Only by nipping this problem in the bud can we prevent a legion of duplicitous dealers ruining China's globally important paleontological legacy, and allow us to treat fossils sourced from China with the confidence and awe that they deserve.

Next week: The 5 Greatest Palaeontology Fakes of All Time #4: Irritator

Also, see PaleoDirect's fake fossil page at http://www.paleodirect.com/fakefossils1.htm for an incredible collection of fakes and how to tell the difference.