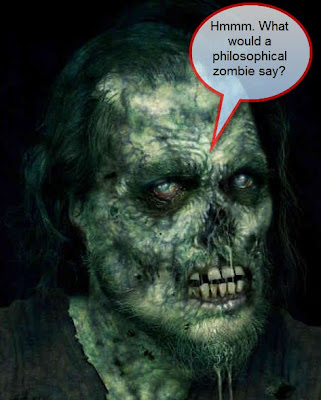 You can't read a book like the excellent Conversations on Consciousness (interviews with experts in the field of consciousness), by Susan Blackmore (not pictured above), without having some pretty wild conversations with your own consciousness. Unless you're a philosophical zombie, of course. A philosophical zombie is not, as one might think, a zombie who spends a lot of time in serious intellectual questioning about the nature of reality, it's a zombie who exists merely as a philosophical concept: a sort of litmus test of where you sit on the whole issue of dualism (that mind and matter are distinct forms of their own) and monism (that mind consists of matter.)

The idea is: could there be another being who looks, sounds and behaves like Keith, but actually not have any internal experience of self: i.e. no consciousness. The idea of such beings, to me, makes an encounter with a garden variety walking-dead zombie feel like watching a Disney movie. If they could truly exist, then I would have no way of knowing that everybody else I ever encountered was not really a zombie.

One of the other difficult concepts in the study of consciousness is that of free will: is it an illusion, do we have it, or is it something we use as a crutch to give our lives meaning? Most philosophers and scientist in the field, I think, come down on the side of our living in a deterministic universe, where every conscious act has a preceding cause, and the causal chain, in principle, extends back to the beginning of time, and across the cosmos (compounded by "spooky action at a distance".) The whole a butterfly flaps its wings, and there's a tidal wave on the other side of the world thing.

Other researchers state that it doesn't matter whether free will exists or not: we experience ourselves as being able to chose, and therefore, within the realm of consciousness - which is the only realm that can ever be real to us - that we can ever proves exist - we have free will by very definition.

In the final chapter of Conversations, the book's editor chats with a scientist named Daniel Wegner who has a slightly different, but intriguing take on the deterministic view. The experience of free-will is actually a construction, he says: our body does something, and we introspect on it almost simultaneously, and this creates the illusion that we decided upon the action of the body. Wegner has backed this up with tests that show how easy it is to engender the belief in somebody that they consciously chose to do something over which they had no agency at all.

A subject has hold of a board, which rests above a computer mouse, and he can move the pointer over the screen. He wears a headphone and he's told to move the mouse cursor around to different objects whenever music plays. At the same time, an experimenter has control of the same mouse cursor at another workstation. It's been shown that he can force the mouse cursor to a point of his choice while the subject believes he made the choice himself.

As I write this, I'm on the flight home to LA after two weeks in North Carolina, and I went to the bathroom just now, having finished the book. Sitting on the toilet, I tried to experiment with this sense of whether I was in control of my actions or not (and I'm not talking about bowel movements.) I thought up a little experiment you can do at home (when nobody's watching, if you're interested in avoiding being labeled an eccentric.) Sit at a table, and put a graspable object in front of you, say a pen. Tell yourself that sometime in the next few seconds you're going to pick up the pen, and that you're going to try to catch yourself in the act of volition.

If you do this often enough, you'll start to question how the decision to move was made. Without having moved, it seems fairly easy to feel that you're going to be making a choice. But the split-second after you've moved, you can almost see that it happened on its own. However much you try to control it, say, by telling yourself: "Okay, I'm going to pick it up .....now!" - the actual second at which the "now" gets implemented can feel completely spontaneous and unwilled.

Of course, you could also make the argument that the pen only got picked up because you decided to go along with my experiment instead of staying in your comfy chair, or wherever you're reading this blog (if you're even actually having the experience of reading it and aren't a philosophical zombie.) But cast your mind back over the previous few minutes: can you spot a moment where you made the decision to do the experiment?

For me, though, this argument falls apart a little when you see that you can make plans for the future: even with the little experiment I posed: you decide that in a while you're going to grab the pen. The body can't then grab the pen solely on its own: it had to be preceded by the thought from the mind that at some point you were going to grab it. I mean, you could have this thought a whole year earlier, and put a reminder in your calendar. Using Wegner's argument, the hand grabs the pen, then the mind becomes aware of it. He may very well be right that the actual moment of grabbing is dictated by the body, not the mind, and, in that sense, the mind did not have free will. But it's impossible for the body to know that the mind intended to do this, and planned it one year ago, and has even forgotten it, and needed a reminder to do it. So that act of deciding had to be the moment of free will.

Some people with agile minds might say: ah, but maybe the body remembered it, even if the mind didn't. Or go further and say that the mind is the body, and just because the conscious mind didn't remember, it doesn't mean that the body didn't remember. But that seems a little far-fetched. We don't even really know how the body stores memory, and now we're postulating that the body can have two separate ways of recalling that memory? This argument takes you into the land where Occam's razor rules.

I've noticed that thinkers like Wegner who introduce complex scientific and philosophical concepts to a lay public, tend to glide gently over missing pieces of their arguments assuming the audience won't notice. His argument makes perfect sense if you assume every thought produces an action. But most thoughts do no such thing. (Perhaps I'm being unfair to Wegner, since I'm arguing solely on the basis of the interview with Blackmore, and, if so, apologies.) Of course you can get infinitely more complex about this and say that the original action was to put the reminder in your calendar, and it was your body that did that.

In practice, though, much as with the decision about choosing your real self I wrote about recently, you have to make the choice (or at least experience the illusion of choice) for yourself that whether or not you have free will isn't important: if we functioned as if we didn't have free will, then there'd be no moral responsibilities, and human society would decay into savage anarchy.

Interesting: if everybody gave up on free will, then this descent into every-man-for-himself would give everybody the experience of what it's like to live in LA in 2011. What was I smoking when I "chose" to move here? It's enough to turn a man into a zombie, philosophical or flesh-eating.

The Bipolar Universe
More Articles All Articles
About