If you're a communist dictatorship, the solution for pollution is simple - you ban driving.

They did just that during the Summit of the Forum on China-Africa Cooperation from Nov. 4-6, 2006 and it might be an indicator for what they will do during the 2008 Summer Olympics.

The Chinese government removed 800,000 cars from the road during that three-day period - that's around 30% of the total cars in Beijing. The researchers documented a 40% reduction in NOx, a nitrogen oxide formed during combustion, while the restrictions were in place.

How much does NOx contribute to global warming? Like most things in global warming you can pick a number and find evidence to back it up so it's hard to say with any accuracy.

Do the results add up? Not really, as the researchers point out. Their estimates state that nearly 70% of all NOx emissions in the Beijing area were from vehicular emissions during that period. Using that metric they calculated that there would need to be a 50% reduction in vehicular use in Beijing to account for the observed 40% reduction in NOx yet the Chinese said they only banned 30% of the cars. Either the scientists are wrong about NOx or the Chinese government banned more cars than they said.

"We're not sure what this means, and there will definitely need to be more detailed data on vehicle energy usage, like gasoline sales data, to develop a more precise value," Wang said.

China is, by its reported numbers, the second largest producer of greenhouse gases behind the US. They may be number one because we rely on their statistics ( and we just saw an example of that moving target ) but now scientists are using satellites to try and keep China's numbers honest. 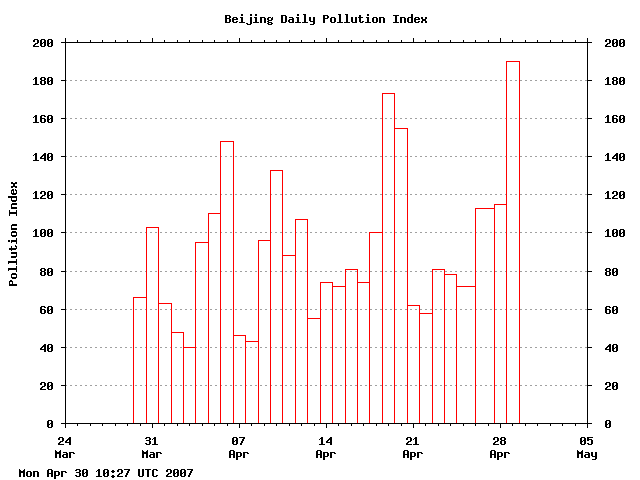 Data source: http://english.sepa.gov.cn/
"I think the real value here is that these kinds of restrictions can really bring about significant change," says McElroy.

Yes, another scientist recommends banning cars to curb a greenhouse gas that contributes in an unclear way to global warming. This is fine if you believe that the Chinese government banned vehicles on a fair basis - private vehicles and government ones, poor people and party leaders alike. But governments are rarely fair and dictatorships are even less accurate about their statements on fairness than they are on pollution.

They'll likely do this on a test basis again this summer so scientists will have another opportunity to calibrate and refine the accuracy of their findings.

Until then, take with caution any statistics that tell you banning cars for a few days cuts greenhouse gases in half. Like most solutions when science and advocacy start to mix, you may get a different result than you expect.