This first part is an introduction to the behaviour of Arctic sea ice.

The second part will discuss current reports about the state of the Arctic.

The third part will describe the state of the Arctic ice as of April 2010.

In order to understand the current state of Arctic sea ice it is necessary to know if it is in any way 'normal' or 'abnormal'.  In this first article I give some historical and scientific notes to show what has been observed historically.

Before the age of satellites, much of what was known about the Arctic came from a relatively few explorers.  Only since the International Geophysical Year 1958 has the region been studied extensively by scientists from many disciplines.

The far north remained mostly unknown because it was so hostile to human life.  Many a brave explorer died, many a ship perished in that harsh wilderness.

Fridtjof Nansen, in 1888, became the first person to cross Greenland.  Due to pack ice along the coast, Nansen and his companions had to sail and row 35 miles to reach the coast after leaving their ship.  Nansen later led the Fram_expedition, in which the specially built Fram was deliberately beset in the ice near the New Siberian Islands at 78o49'N and left to drift.  Fram reached 84o 4' N before drifting out of the ice near Spitsbergen.  In his book Furthest North, Nansen described what was known about the Arctic before his expedition, and what he discovered.  In the late 1800s many people still believed that open seas or land might be found at the pole.  Although Nansen didn't reach the pole, he found it unlikely that there would be open water there. 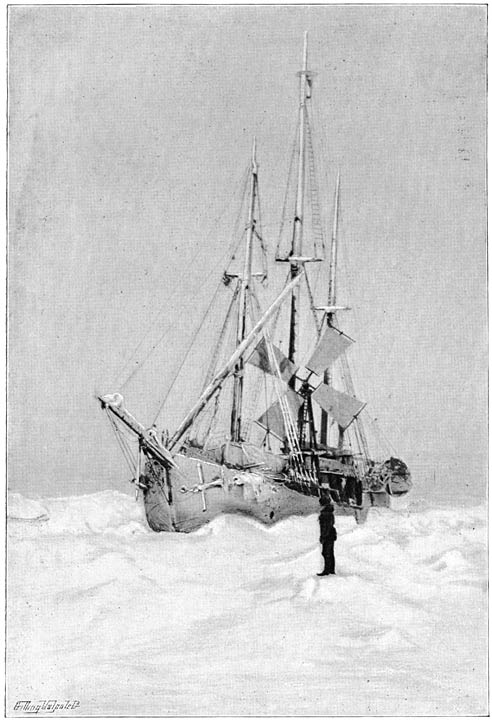 Robert E. Peary reached the pole April 7, 1909, crossing over the ice from a base on Ellesmere Island.  He had reached that base on the Roosevelt, having sailed through the Nares Strait to reach a farthest north by actual sailing rather than drifting with the ice. 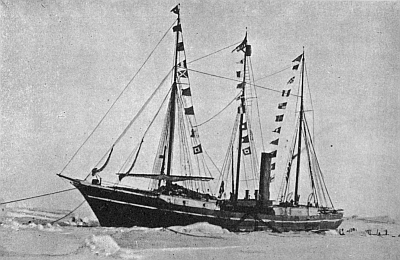 From Etah to Cape Sheridan! Imagine about three hundred and fifty miles of almost solid ice—ice of all shapes and sizes, mountainous ice, flat ice, ragged and tortured ice, ice that, for every foot of height revealed above the surface of the water, hides seven feet below—a theater of action which for diabolic and Titanic struggle makes Dante's frozen circle of the Inferno seem like a skating pond.
Robert E. Peary - The North Pole - 1910

Historical reports of exploration in the north polar seas describe an area in which, even in late summer, the ice was so thick and consolidated in most areas that ships could not pass.  Explorers such as Nansen and Peary described a chaotic region where ice formed layers and ridges much like geological strata.  Although one might not expect the Arctic to be subject to lunar tides, early explorers reported significant tidal movement of ice.

The combination of tide, wind and current, together with differential solar heating as the terminator's northernmost point ranges across the Arctic, cause rapid and violent movements in the ice.  Cloud cover can increase solar heating by re-radiation or reduce it by increasing the local albedo.  Pollution can also affect albedo, mainly adversely.

Formerly, during the continual darkness of Arctic winter, the ice would consolidate.  Giant rafts of ice, when pressed together or riding over one another at a suitably low temperature become 'glued' together by the process of regelation.  Snow falling on top, and meltwater, freeze as layers which further consolidate the ice by increasing its thickness. 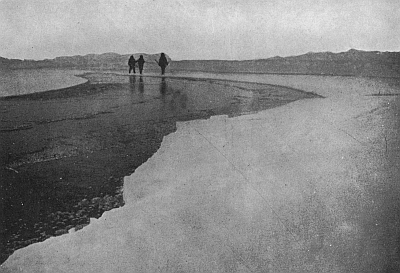 The natural motion in the ice causes forces of tension as well as compression.  Ice in tension will snap suddenly, opening a crack known as a 'lead'.  A lead can be narrow enough for a person to jump across or wide enough for a ship to pass.  Not that you would want to put your ship in there.  Many have perished from making that mistake.  A lead can close as suddenly as it opens.  The process is so fast that explorers would wait to see if a lead would close before walking along to find a path around it. 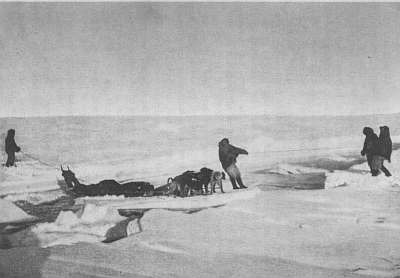 The opening of a lead releases tension as thermal energy.  The energy, at about 1kilowatt per square meter, forms a mist over the newly-open water.  In normal times the warmed air would rise and be carried away to be replaced by colder air.  The removal of heat combined with the colder air cause a lead to freeze over rapidly.

Leads can form anywhere in the ice.  Refreezing gives a surface on which snow may build up.  Over the course of time it can form layers of ice. 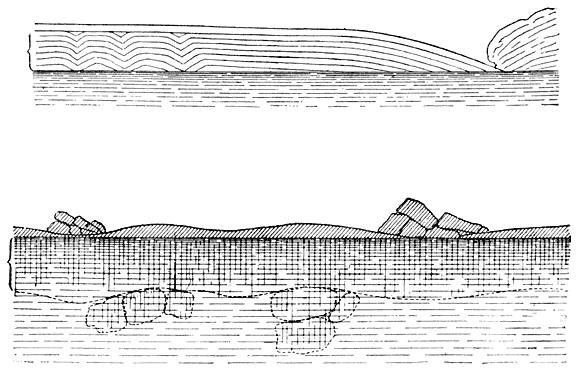 When ice is in compression the new ice is the weakest component in the
system.  Accordingly it is readily shattered into over-riding slabs.  Slabs can over-ride blocks, leaving them trapped under the main ice sheet, where they may, or may not freeze together, depending on temperature.  The jumbled ice on top freezes as thick ice.

Sheet ice extends below water to a depth sufficient to support its weight through buoyancy.  As with icebergs, so with sheet ice: the thickness showing above water is a guide to total thickness.  From the air, early explorers could gauge the state of the ice fairly well from long shadows thrown by the low sun.

Formerly, Arctic sea ice was formed mainly of old ice, with only about 10% formed by direct freezing of open water.

Between the pressure ridges are the old floes, more or less level. These floes, contrary to wide-spread and erroneous ideas, are not formed by direct freezing of the water of the Arctic Ocean. They are made up of great sheets of ice broken off from the glacial fringe of Grant Land and Greenland, and regions to the westward, which have drifted out into the polar sea. These fields of ice are anywhere from less than twenty to more than one hundred feet in thickness, and they are of all shapes and sizes. As a result of the constant movement of the ice during the brief summer, when great fields are detached from the glaciers and are driven hither and thither under the impulse of the wind and the tides—impinging against one another, splitting in two from the violence of contact with other large fields, crushing up the thinner ice between them, having their edges shattered and piled up into pressure ridges—the surface of the polar sea during the winter may be one of almost unimaginable unevenness and roughness.

At least nine-tenths of the surface of the polar sea between Cape Columbia and the Pole is made up of these floes. The other one-tenth, the ice between the floes, is formed by the direct freezing of the sea water each autumn and winter. This ice never exceeds eight or ten feet in thickness.

The weather conditions of the fall determine to a great extent the character of the ice surface of the polar sea during the following winter. If there have been continuous shoreward winds at the time when the increasing cold was gradually cementing the ice masses together, then the heavier ice will have been forced toward the shore; and the edges of the ice-fields farther out, where they come in contact, will have piled up into a series of pressure ridges, one beyond the other, which any one traveling northward from the land must go over, as one would go over a series of hills.

If, on the other hand, there has been little wind in the fall, when the surface of the polar sea was becoming cemented and frozen over, many of these great floes will have been separated from other floes of a like size and character, and there may be stretches of comparatively smooth, young, or new, ice between them. If, after the winter has set in, there should still be violent winds, much of this thinner ice may be crushed up by the movement of the heavier floes; but if the winter remains calm, this smoother ice may continue until the general breaking up in the following summer. 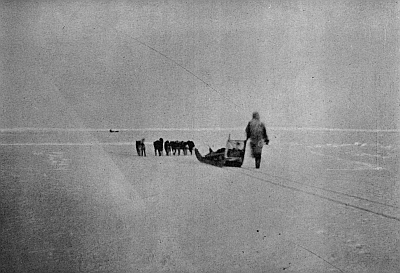 CROSSING A LARGE LAKE OF YOUNG ICE, NORTH OF 87° March 30

At eight o'clock in the morning the temperature was down to minus 30°, with a bitter northwest breeze. The grinding and groaning of the ice had ceased, and the smoke and haze had disappeared, as is usual when a lead closes up or freezes over. We rushed across before the ice should open again. All this day we traveled together, Bartlett's division, Henson's, and mine, constantly crossing narrow lanes of young ice, which had only recently been open water. During this march we had to cross a lake of young ice some six or seven miles across—so thin that the ice buckled under us as we rushed on at full speed for the other side. 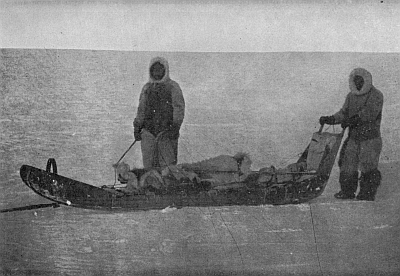 In traversing the ice in these various directions as I had done, I had allowed approximately ten miles for possible errors in my observations, and at some moment during these marches and countermarches, I had passed over or very near the point where north and south and east and west blend into one. 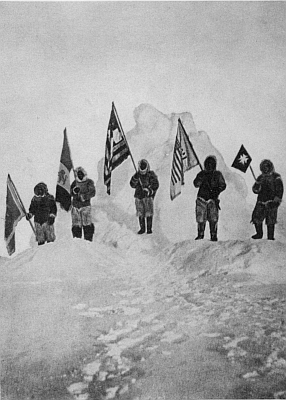 There have been claims that Peary didn't actually reach the pole.  His description of criss-crossing the area in order to cover possible errors of navigation demonstrate to me an intellectual honesty that some of his detractors would deny.  As for suspicions about the speed of progress of his final push to the pole: he had the use of a support team; he had rested; he crossed wide areas of freshly frozen water.  All of these add to his probable veracity.

A narrow and fresh lead can be a major obstacle.  A wide but older lead can be a flat surface over which rapid progress can be made.  Indeed, explorers emphasise the desirability of crossing such thin ice with all possible speed.  Previously, such large areas were rare, and were described as buckling under weight, or as being springy.  This year, 2010 it has been described as far more extensive and 'floppy'.  It takes a special kind of bravery to press on when continually encountering such thin ice.

We've also been seeing vast areas of open water and very thin ice – it's the first time any of us have experienced anything quite like this on such a large scale. The way the ice is behaving is simply the strangest we have ever seen. We've spent days on ice that was bending, bouncing and wobbling as we passed over it. Martin's feet went through a few times – his walking on thin ice technique rather resembling a rhino!
Catlin Survey
http://www.guardian.co.uk/environment/blog/2010/mar/31/catlin-arctic-sur...

Arctic Ice 2010 #2 - What People Are Saying discusses how the media and bloggers are describing the current state of the Arctic.

Arctic Ice 2010 #3 - The State Of The Ice describes the actual state - on April 09 2010 - of the Arctic, with satellite images as proofs.
The Chatter Box
More Articles All Articles
About