This is an update to my article Arctic Ice June 2010, part of my ongoing series of articles about the Arctic.

The NSIDC ice extent graph shows a fairly constant and greater then average rate of ice loss over the last four weeks. 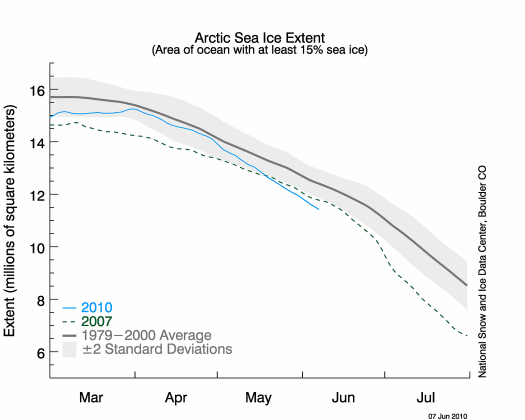 The National Snow and Ice Data Center - NSIDC - has just published its Arctic sea ice analysis for May 2010.  Here are some abstracts from the NSIDC analysis for May, with my comments.

In May, Arctic air temperatures remained above average, and sea ice extent declined at a rapid pace. At the end of the month, extent fell near the level recorded in 2006, the lowest in the satellite record for the end of May. Analysis from scientists at the University of Washington suggests that ice volume has continued to decline compared to recent years.

As ice began to decline in April, the rate was close to the average for that time of year.
In sharp contrast, ice extent declined rapidly during the month of May.

My prediction was right in that there was less ice extent reported at the end of May 2010 than in 2007, but wrong in that I failed to see just how great the decline would be.  The biggest obstacle to accurate prediction is the variability of Arctic cloud cover and its variable effects on melting.

Arctic air temperatures averaged for May were above normal, continuing the temperature trend that has persisted since last winter. Temperatures were 2 to 5 degrees Celsius (4 to 9 degrees Fahrenheit) above average across much of the Arctic Ocean.

Some areas of the Arctic have been slower to warm than others, but they are still warming.  Along every Arctic coast there is either open water, weak young ice, or highly fragmented and mobile ice.

The ice loss in the general area of the Bering Strait has been slow to average for the season.  From the Kara Sea to Amundsen Gulf the main pack is separating from, or already separated from the shorebound ice.  I predict that this ice loss will accelerate as highly fragmented young ice, and ice with surface meltwater, disintegrate rapidly. 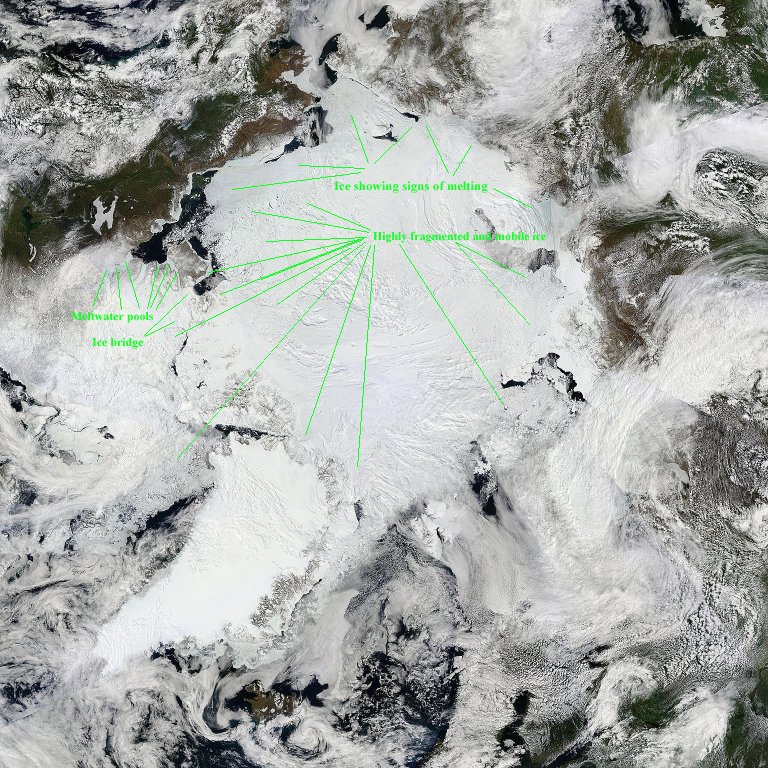 The most persistent ice is generally either shorebound or locked between two areas of land, as e.g. in straits or fjords.  This is due to the way that mechanical pressures cause the ice to consolidate and thicken, and thus resist melting.  There is a persistent  ice bridge in Melville Sound, but I expect this cooler than average area to catch up with nearby warm areas by the end of June. 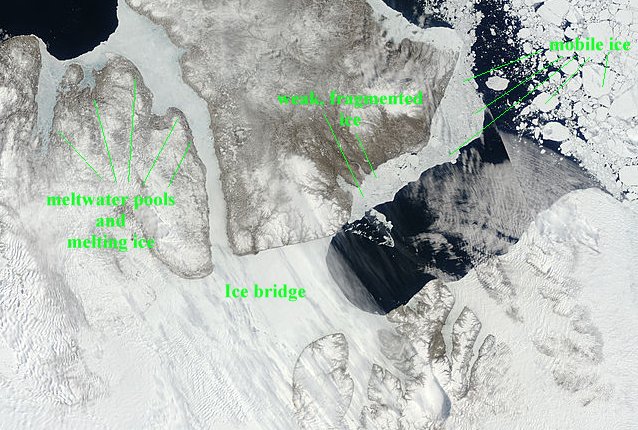 The NSIDC measure of ice extent includes any area with at least 15% ice.  Judging from direct observations of ice in MODIS images, the greatest sea ice losses by volume have been of older perennial ice via Nares Strait and Fram Strait.  The nearby ice, being highly fragmented and mobile, has expanded into gaps.  Being over 15% ice, these specific areas of ice loss have not been picked up in measures of ice loss by extent.

About 50% of the sea ice is, as of this date, highly mobile due to failure to consolidate or to fragmentation of consolidated pack.  As areas of open water extend, there is a tendency for continuous areas of fragmented ice to expand into that open water due to lateral pressures and impacts within the pack.  This can mask ice loss as measured by extent for as long as the area within the pack edge contains more than 15% ice.

Given that the reality is warmer water due to the loss of albedo, it may happen that an area showing a fairly steady 'extent' will exhibit a 'sudden and dramatic' ice loss according to collected data.  The ice loss in terms of volume will in fact be at a fairly steady rate until the real 'sudden ice loss' shows up as the rapid melting of the last remaining fragments in an otherwise open and warming area.

For these reasons I expect this melt season to continue to show record losses of sea-ice extent as reported by NSIDC.