In part #1: Background And Recent History I wrote:

The global warming trend observed in direct measurements and a very wide range of proxy data since about 1860 has led many climate researchers to discuss the possibility that we humans are engineering a new tipping point through our profligate use of fossil fuels.

Of particular concern is the possibility that if the Arctic is ice free in summer, or if the Greenland ice sheet shrinks, or worse: both, then climate change may be inevitable and irreversible.

A stable dynamic system may react in opposition to a disturbing force, tending to bring the system back into the original stable regime.  Alternatively, the system may amplfy or augment the disturbing force, thus bringing the system more rapidly into a new, different stable regime.  For any given system, the point at which the system begins to move into a new stable configuration is commonly known as the tipping point.  It frequently arises that as a tipping point is passed, the force needed to reverse the trend is greatly amplified.

As an instance of a dynamic tipping point, consider a truck going down a steep grade, or a lorry going down a steep hill if you speak the other brand of English.  There is no need to continually apply the brakes if a low gear is selected.  If low gear is not selected and the vehicle ends up going too fast then applying the brakes will just burn them out.  At this point the vehicle is virtually unstoppable while it remains on the slope.  If the driver is skilfull enough, the vehicle will come to rest on the flat.  Otherwise ...


What we have learned about the geological history of our planet is that it is quite capable of both kinds of reactions to climatic parameter change: both pushing and pulling.  Reactive forces can push against the trend as negative feedbacks or can pull with the trend as positive feedbacks.  I shall now point to some Arctic climate feedback mechanisms.

The single most important thing to ask about Arctic sea ice is: "How old is it?"  Recently, a small blip lasting a couple of days was the cause for much rejoicing as media and bloggers reported an 'Arctic Recovery'.  There was no recovery.  In an Arctic deprived of the greatest part of its oldest ice - ice greater then 5 years old - ice forming over less than one week, most especially in early Spring, is not going to make a jot of difference.

The oldest Arctic ice is in its ice shelves.  Those shelves are not widely known to exist and are nowhere near the scale of the Antarctic ice shelves.  But they are an important indication of what is happening in the Arctic.  When Robert Peary squeezed his ship past the ice in the Nares Strait and found a little open water in leads off the Ellesmere Island coast, he reported the presence of ice shelves.

In 1907, Arctic explorer Robert Peary traveled along the northern coast of Canada’s Ellesmere Island on a dog sled and described a “glacial fringe” along the island’s northern coast. Modern glaciologists have deduced that this ice fringe formed roughly 4,500 years ago and, in Peary’s time, was likely a continuous ice shelf covering some 8,900 square kilometers (almost 3,500 square miles). By the 1950s, much of that ice had disintegrated.
http://earthobservatory.nasa.gov/Features/Ellesmere/ 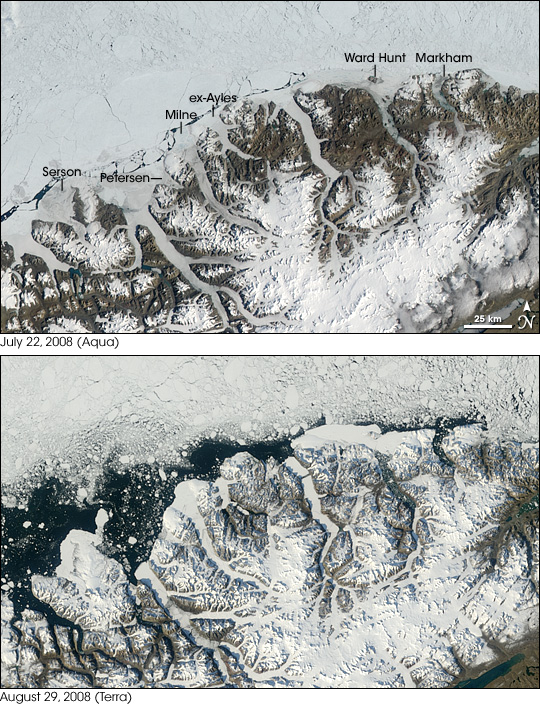 By July 2008, what had once been a massive ice fringe along the northern Ellesmere coast had been reduced to five isolated ice shelves: Serson, Petersen, Milne, Ward Hunt, and Markham. (The Ayles Ice Shelf broke free in 2005.) These five ice shelves constituted the last remaining ice shelves in Canada.

On July 22, 2008, a new wave of ice shelf disintegration began and, by late August, these ice shelves had lost a total of 214 square kilometers (83 square miles). A group of researchers led by Derek Mueller at Trent University, and Luke Copland at the University of Ottawa, announced the changes in early September 2008.

The full article 'Rapid Retreat' is a highly recommended read.

Although ice shelves contribute only a small part of the total Arctic sea ice area, they slow down the rate at which glacial ice flows to sea.  The mechanism may be thought of in terms of the sea ice exerting a 'back-pressure' on the main glacier.  Removing the sea ice has a number of effects.  Firstly, the back pressure effect is gone, so the glacier may flow and calve more rapidly.  There is a change from about 20% absorption of solar energy by the shelf ice to about 90% by open water.  This can be a positive feedback to the local glacial calving mechanism as warm water erodes the base of a glacier much faster than the sun melts the upper surfaces.

In the last of these positive feedback mechanisms, freshly calved icebergs can be blown out to sea unobstructed by thick, ancient ice.  In the local system, ice loss is again accelerated.  Ice which forms in winter in these sheltered, narrow bays and fjords will not compact, fold or over-ride to any significant extent.  Once gone, there is little chance of recovery.  One year ice is highly vulnerable to rapid melting in Summer.

The area of shelf ice loss - which becomes an area of open water in Arctic Summer - is small, but when added to all other areas of what might well be considered permanent ice loss is not at all trivial.

Albedo, from the Latin 'albus', meaning white, is a measure of the reflectivity of a planetary surface.  The albedo of the entire Arctic and sub-Arctic regions should, I suggest, be considered when dealing with albedo variations as a feedback mechanism.  The albedo varies at different rates in different zones.  For example, the albedo of glaciers and ice sheets has, historically, hardly varied from one season or year to the next.

Bodies of water within, adjoining or relatively near to the Arctic Ocean tend to have both seasonal and yearly variations, but collectively their decadal variation has been trivial in the past.  This year most, if not all of these bodies of water will lose substantial ice cover as much as three weeks earlier and regain it as much as four weeks later than historical norms.

Given the total area of these lakes, bays and fjords, it is to be expected that the dramatic and early loss of polar albedo together with its late recovery will act as a positive feedback causing ever greater annual loss of average albedo in Summer.

Land absorbs and retains much less heat than water.  In particular, permafrost tends to slow changes in albedo during Arctic Spring and to accelerate them during Arctic Fall.

Loss of albedo is less important in the short nights of Winter.  It is of no relevance to global warming in the 24 hour nights within the Arctic Circle.  But in the Summer, lower average albedo is a positive feedback for any warming trend.

The Gulf Stream is one part of the Atlantic thermohaline circulation.  As everybody knows, it keeps Europe warm and if it shuts down we are all doomed.  I was taught this as a small child at school in England.  So was Richard Seager of the Lamont-Doherty Earth Observatory of Columbia University.

If you grow up in England, as I did, a few items of unquestioned wisdom are passed down to you from the preceding generation. Along with stories of a plucky island race with a glorious past and the benefits of drinking unbelievable quantities of milky tea, you will be told that England is blessed with its pleasant climate courtesy of the Gulf Stream, that huge current of warm water that flows northeast across the Atlantic from its source in the Gulf of Mexico. That the Gulf Stream is responsible for Europe's mild winters is widely known and accepted, but, as I will show, it is nothing more than the earth-science equivalent of an urban legend.
http://www.americanscientist.org/issues/id.999,y.0,no.,content.true,page...

A few times a year the British media of all stripes goes into a tizzy of panic when one climate scientist or another states that there is a possibility that the North Atlantic ocean circulation, of which the Gulf Stream is a major part, will slow down in coming years or even stop. Whether the scientists statements are measured or inflammatory the media invariably warns that this will plunge Britain and Europe into a new ice age, pictures of the icy shores of Labrador are shown, created film of English Channel ferries making their way through sea ice are broadcast... And so the circus continues year after year.
http://www.ldeo.columbia.edu/res/div/ocp/gs/

Ocean warmth doesn't arrive on land except by advection.  If Westerlies blowing over the Atlantic to Europe from America were warmed entirely by the Gulf Stream, then the Gulf Stream would be too cool to have any effect in the Arctic regions.

In my next article I intend to show how the Gulf Stream affects the Arctic sea ice in some very surprising ways.  Showing that climate truly is global, some little-known research suggests that what happens in Miami one year may affect what happens in the Arctic the next year.