Who are your all time favourite childrens' authors?

Adolf Hitler, famous author of the philosophical masterpiece Mein Kampf has his children' early learning books and methods placed on lists of approved materials for use in British and American schools.

Of course, even if Hitler had written early-learners for children, nobody in their right mind would promote them.  Would they? Just look at the megalomaniac's background of ga-ga science and philosophy. National socialism - that's a socialism which demands that one specific nation has the right to promote itself by guile, legal chicanery, force or any and all means against all comers. And let's not have any of that science nonsense. Anyone who believes that the atom can be split can leave this glorious axis country and go and work for the allies.

Well, we don't want to teach our children that sort of nonsense, do we? The Nazi creed stands in direct opposition to altruism: a weak neighbour is the perfect victim for a bloodsucking vampirist cult. If we found HitlerJugend training manuals in our schools we would surely burn them: who wants to breed a race of vampire babies?


How To Teach Madness

Hitler, for all that he was a raving lunatic, knew how to carry a crowd along. It no doubt dented the pride of the old-school Prussians that this strutting runt with a thick Austrian accent could command a crowd better than the product of any academy of rhetoric. Hitler was a master of propaganda. He knew the truth about truth. Bury a strong truth in a midden of lies, and people will quite fail to distinguish the bovine excrement. Bury a lie in a heap of self-evident truth and it becomes self-evident truth. Such was Hitler's mastery of the magic of myth that to this day we have holocaust deniers.

Fortunately, there is no way that an enlightened schools oversight authority would allow the promotion of Hitler Youth culture in our schools. Again, the natural forces working in a free economy ensure that only quality children's books make it to the top of best-seller and all time favourite lists, right?

It follows, as a matter of inexorable logic that a world record holder is the best author to have his books placed in all of our schools, so that his wonderful literary style and deep insights into the sciences of linguistics and psychology can enlighten the children of many generations to come. Such is the enthusiasm with which this author's genius is hailed that his books and teaching methods are being adopted most enthusiastically into our school systems.

In case my readers might think that this is all hype, I do assure you, these books are endorsed at some very high levels. Publisher's Weekly has this to say about the record-breaking  author:

Demonstrating his unique ability to relate even the most complicated story with a keen eye for detail and realism, [his] stunning writing ability and creative imagination set him apart as one of the greatest literary figures of the 20th century.

So, there we have it: your children are about to be educated using the books and methods of "one of the greatest literary figures of the 20th century".


How To Become a Best-Seller

So, one might think that an acclaimed literary genius with the endorsement of a major science-medical publisher would be the ideal source for methods and materials in the education of the world's children.

How may I best express my own view of having this author's materials used to teach children? No way! Absolutely not! Over my dead body! Excuse me while I throw up!

You see, we are dealing here with a surreptitious infiltration of scientology into our schooling systems.

Scientology, originally called dianetics, is a word invented specifically to sound scientific by L Ron Hubbard, founder of a group of people who think that everyone else in the world except them is barking mad. Evolutionists, creationists, Christians, Moslems, Jews, Hindus; they are all barking mad, say the scientologists. The 'truth' is that we are all infected with ghosts from Venus, called Thetans. 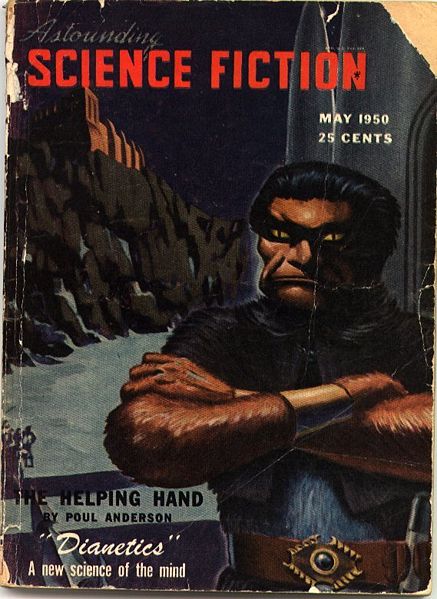 
The word dianetics is supposedly derived from dia - through, and nous - mind or knowledge. Hubbard was no scholar. his themes borrow heavily from the news of his times and from science fiction writers of his era. It is entirely plausible that Hubbard, setting out to found a religious cult, borrowed the name from the cult of Diana. The comic book character Wonder Woman is, in the stories, a descendant of the Gods, and named after the moon goddess, Diana. The cult of Diana appealed to slaves and the working classes.  hubbard designed his methods to appeal to the vulnerable and the easily led.

Dianetics, aka scientology, is supposed to 'free' people from Thetan dominance through blind obedience to a supervisor. This, too, seems to be derived from the psychologist William Moulton Marston, creator of the Wonder Woman character.

"Only when the control of self by others is more pleasant than the unbound assertion of self in human relationships can we hope for a stable, peaceful human society..."

Marston experimented briefly with the idea of using galvanic skin response as an interrogation tool. In the 1930s, when Hubbard was formulating his ideas, the electroencephalograph was being developed. EEG waves are named after Greek letters, alpha, beta, delta, theta. It is easy to see where Hubbard got the idea of Thetans in control of the human brain. Now, an EEG machine is quite expensive. A simple galvanometer is fairly cheap. When somebody picks up the two leads to a galvanometer, the needle moves. That is because the human body produces electricity. Er, no, say the scientologists - it's because the meter detects thetans. Of course! Why didn't I think of that? Scientologists don't like it when someone says that their e-meters are bogus. Oh, no, they say, the lie detector is'nt one teeny bit bogus. Why would so many law enforcement agencies rely on bogus science?

Scientology is anti-science. Scientologists absolutely do not believe in psychiatric care or medicine. So much so that they actively campaign to discredit and sue as many psychiatrists as they possibly can. It is entirely impossible for them that any scientific theory of cognition can be true, considering that everyone who has not been processed by the scientology cult has a brain riddled with Thetans. Schizophrenia - that's  caused by Thetans.  Migraine - Thetans.  Autism - er, let me guess, would that be Thetans?

Scientology is absolutely not a religion: it's a pyramid selling scheme for really bad books. The brainwashing techniques of scientology are so successful, however, that it has no trouble recruiting new underlings to pour money into the coffers of the overlords. There is tax free big money to be had there, by anyone willing to jump on the scientology bandwagon. A book seller suffering losses due to the increasing popularity of web-based resources might be tempted by the profit potential. As also Britain's largest medicals group, whose profit margins are being hit heavily by the current recession.

There is a natural human tendency to see a conspiracy where none exists. I, being a mere mortal, am not exempt from that tendency. I am merely making an observation that there are two commercial ventures in the scientific arena with a common financial problem and a common factor: Sir Crispin Davies. By having a foot in both camps, Sir Crispin Davies may well bring GlaxoSmithKline into ill repute. The conspiracy theorists who believe that vaccines somehow cause autism will be overjoyed to know that books published by scientology, the world's most infamous autism denier, are being promoted by a commercial concern associated with GlaxoSmithKline, their favourite target.

But what has this to do with Hitler?

Hitler set up the HitlerJugend, an organisation dedicated to the poisoning of young minds by indoctrinating them with the Nazi creed. At the time when Hubbard was writing his work of fiction about a master-race transporting its victims in huge spacecraft and tossing them into volcanos, the allies were becoming aware of the horrors of the Shoa, the Holocaust.

The scientology cult blames psychologists for the horrors of WWII.  Yes, all psychologists, and yes, all the horrors.  They have a museum which 'proves' this theory.  The creationists museum would make any scientist shake with laughter.  The scientologist attack on bona fide science is no laughing matter.  They are in a much better financial position than the creationists to infiltrate their pseudo-science into our schools.  Creationists are forced by the very nature of their beliefs to use key words that are easily detected.  Scientologists use terms that a reviewer of an older generation might mistake for modern slang.  In fact, these are bogus science terms from Hubbard's early writing on psychology.  And those writings, just like his science fictionbooks, are utter garbage.