Patrick Lockerby
Bridges That Build Themselves

The two oldest types of bridge are the arch bridge and the corbel bridge.  It takes a lot of time and effort to build them, but they can last for thousands of years.

Rockfalls can make natural bridges over streams, but the 'design' is very inefficient.  The water channels are easily blocked, with resultant flooding of the adjacent banks.

If I told you that a tornado could pick up rocks and drop them across a river so as to form a perfect arch bridge, you wouldn't believe me.  I hope.  The only way to build a stone arch bridge is to set up a type of scaffolding, shuttering, or former - more properly known as centering.

It is called centering for a very good reason: it is the device that places the stones at the correct distances from the center of curvature of the arch.  Lop-sided bridges tend not to last too long. 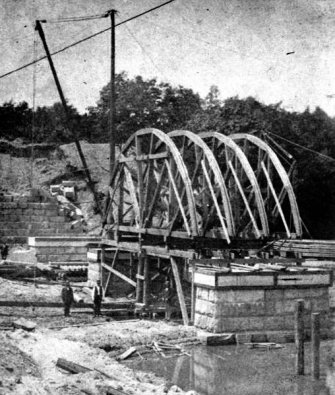 Centering under construction for a stone bridge.

The centering in the picture is incomplete.  The frames will be planked over so that the planks tie the centering together rigidly and provide a curved surface onto which the stones can be laid.

Even with the centering in place, we can't just throw stones at it.  The stones must be very precisely placed.  If we just heap stone onto the centering we may have something that looks like a bridge, but as soon as we remove the centering the whole lot will collapse.

The strength of a well-built arch bridge comes from the elimination of tension.  You can build an arch bridge out of any material that is strong in compression, even if it is very weak in tension.  The vertical load on the bridge is resolvable into forces in the separate stones. 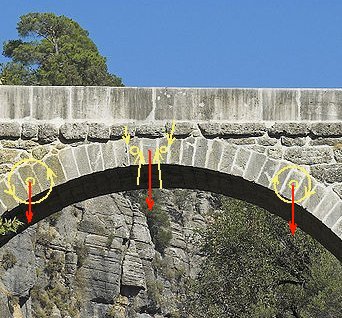 Forces in a stone arch bridge.

The strength of the bridge derives from the pressing of each part against the other.  The actual static load on the bridge is irrelevant up to the crush failure point of the material.

An excessive offset load, or a sudden shock load can upset the balance of forces and bring about the collapse of the arch.


The formation of ice arches

Ice arches are exceedingly common.  An ice arch is an arch bridge laid flat.  Instead of gravity, the pressure of ice provides the thrust in a downstream direction.  The quality of the bridge depends on many factors, amongst which are the quality of the 'centering' and the precision with which the blocks are 'placed'. 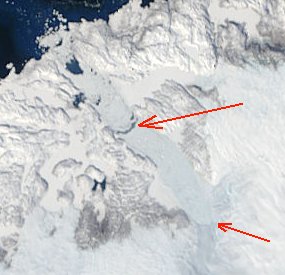 Curve of ice arch in Jakobshavn Fjord.
The calving front is shown by the second red arrow.

Caution.  What follows is somewhat speculative and is posted to promote discussion and further study of ice behavior.

Picture a flow of ice fragments.  Fragments floating on a liquid surface behave something like a fluid.  The flow of a fluid in any conduit is fastest in the surface center and slowest at the edges.  The distribution of velocities plots as a parabola.  Projections and bays disturb the smooth flow, as do widening or narrowing of the fjord.

There are various ways in which ice flow can be halted.  Deep bergs can become grounded in shallows or on bars.  Tabular  bergs, even if smaller than the narrowest part of a fjord, tend to jam up with other fragments and block the flow.  If strong ice of a large enough particle size jams up a flow of ice, then it can act as the 'centering' on which an ice arch can form.  If the particles are too small, or the ice too weak, then erosion from the downstream edge will soon free the ice jam.

An ice arch can form far from an initiating ice jam.  I shall use Jakobshavn Fjord as an example.  Starting with a free flow of ice all along the fjord we shall assume that a jam forms at the narrowest part: the outlet to Disko Bay.  The ice backs up all along the fjord.  Instead of a fairly rapid flow of ice, with collisions causing further fragmentation, we now see a slowing down.  Collisions cause more jams.  The jam extends all the way back to the calving front.

The flow of ice appears to have stopped, but forces are still at work.  The ice is pressed towards Disko Bay. It is still made of separate bits of ice, so it still behaves like a fluid.  Icebergs still percolate through and are released into the bay.  The flow along the ice stream is greater in the center than at the edges.  This causes a buildup of forces upstream which tend to expand the pack across its width.  But the pack has no room to expand, and so the ice is put into compression across the fjord, as well as in a downstream direction.

As compressive forces build there will be a point somewhere along the fjord where the topography combined with flow rate creates a maximum of compression in the ice and where the forces of compression align themselves as they would in an arch bridge.  Ice under steady compression deforms.  Gradually point contacts become full face contacts.  The faces weld together through the process of regelation: the freezing of a layer of water between ice masses.

As soon as the arch forms, no more ice can pass.  Meanwhile, downstream ice continues to flow to the sea, however slowly.  The ice arch has relieved the pressure on the pack.  As ice exits into Disko Bay, the remaining flowing ice is ever less prone to jam.  The ice flows ever faster until, from the ice arch to the sea, there may be no significant amounts of ice.

But all of this takes time.  Meanwhile, seasons change.  If the ice arch formed in late winter or early spring then it will be too weak to last long.  Before the whole fjord can be cleared of ice downstream of the arch, the arch begins to fail.  It fails from combined causes.  Edge erosion from melting changes the distribution of forces.  Eventually the forces are unbalanced enough to generate resultant tension or shear forces which the arch cannot withstand.  Large chunks break off from the arch.  As long as the ice edge remains approximately arch shaped it will merely retreat.  But if the shape becomes too angular or lopsided the whole arch area will collapse. 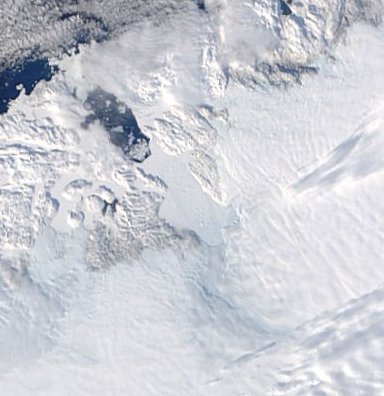 Collapsing ice arch in Jakobshavn Fjord - March 08 2010
Upstream of the ice arch the ice melange has frozen and compressed into a fairly strong mass.  At the calving front, the glacier exerts a compressive force tending to compact the melange.  In turn, the melange exerts a back force on the calving front.  Snow overlies the frozen melange.  Disko Bay did not freeze over in the winter of 2009-2010.  This is not, I suggest, a proximal cause of early calving of Jakobshavn Glacier.  However, it does indicate warmer than usual regional temperature which will have affected the strength of the ice arch and frozen melange.

If an ice arch forms in fall or in early winter then the melange will consolidate more during winter.  A deeper snow cover will form, lasting longer into the summer.  The glacier never stops pushing its floating ice tongue forward.  This tends to compress and hence strengthen the frozen melange.  In turn, the strong melange tends to prevent calving until the melange begins to break up in late summer.

An ice arch which forms in late winter or in spring will be formed of ice which has thinned throughout the summer, hence it will initially be thinner and weaker.  The melange may not have time to be properly compressed by the glacier, hence will not exert so much backforce on the glacier.

The compressive force between a glacier and an ice arch will never be enough to fully compress the ice into a sheet of homogeneous ice.  However, a succession of cold years may permit snow to build up on the compressed ice.  Given enough cold years, the snow and meltwater will build up the ice thickness.  Ice will be extruded at the arch.  This will not result in arch failure.  If the ice is compressed hard against the fjord along its entire length, then extrusion can increase the length and depth of the ice sheet.

An ice sheet formed of melange and growing thicker by snow accumulation and by extrusion will become grounded at multiple points.  It can eventually extrude into the bay as a lobe.  Over thousands of years a continuous ice sheet can form attached to shore.

Conversely, every time the ice arch forms late, or fails to form, the commencement of significant calving is brought forward.  A longer calving season means greater calving front recession.  If precipitation remains constant the glacier will recede in each year that the ice arch fails to form or forms late.  This is a positive feedback to ice loss.

Once the glacier has retreated beyond its grounding line it will no longer be able to exert a compressive force on the frozen melange.  The calving rate will be entirely independent of whether or not the melange freezes or forms an ice arch.

The loss of a floating ice tongue cannot of itself affect sea level.  But once the calving is from the grounding line or above, then further retreat indicates that ice loss is greater than ice replacement from precipitation.  The glacier will begin to contribute to sea level rise when it has no floating tongue remaining.  For Jakobshavn Glacier that may well be this year.  There has already been significant calving front retreat since March 2010.

The calving front has been divided into two lobes since about 2005.  Jakobshavn North is to the right.  It's calving on July 06 was widely reported.  The greater calving of Jakobshavn South, first reported here July 18,  has so far gone unreported in the media.

... modulation of speed with ice front position supports the hypothesis that the major speedup was caused by loss of the larger floating ice tongue from 1998 to 2003. Analysis of image time series suggests that the transient winter ice tongue is formed when sea ice bonds glacier ice in the fjord to produce a nearly rigid mass that almost entirely suppresses calving. Major calving only resumes in late winter when much of this ice clears from the fjord.