Petermann Ice Island (2010) has now broken into two parts.   The smaller island is about 80 km2.  It is the thinner of the two and is likely to melt away first.  Based on the labels already in use in comments1, I shall designate the larger island as Petermann 2010-A and the smaller one as Petermann 2010-B. 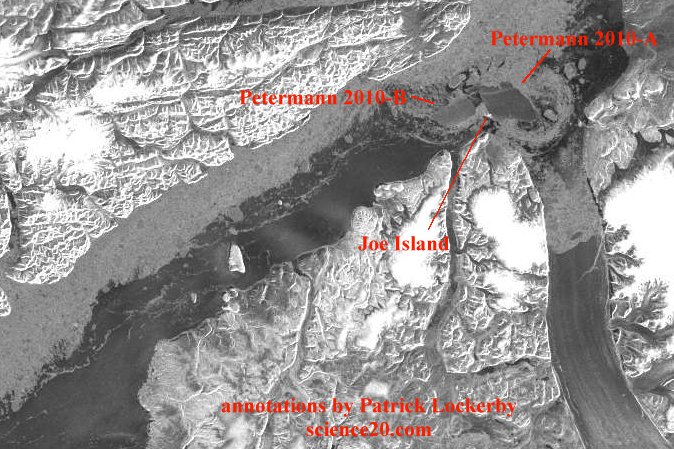 Petermann Ice Islands A and B
image source: http://ocean.dmi.dk/arctic/images/MODIS/Kennedy/201009091609.ASAR.jpg

The importance of the Petermann Glacier calving to climate science is not so much that it happened, but that it was predicted to happen.  Quite a few predictions were made by people working independently as individuals or groups and using different techniques for prediction.

Science is of such great use to society because of its powers of prediction.  Dmitri_Mendeleev predicted the existence of eight elements - since discovered - from his observations of the systematic sets of properties of other chemical elements.  The planet Neptune was discovered in 1846 when astronomers searched for a planet in a region where one was predicted to exist based on mathematical models of the Newtonian mechanics of our solar system.


The ability to extrapolate and interpolate data is what makes the logical processes of science so powerful and so useful to humanity.  Every day, doctors base their prognosis - a prediction of the future - on the patient's past history and present symptoms.


The incontestable fact that the calving was predicted using the scientific method - and that it happened - is a public demonstration of the power of science to predict the future.  This evidence of the validity of the scientific method should be enough to convince any rational person that when climate scientists from the world's nations agree that the world's climate is changing, then it is changing.  The insurance industry is founded on the idea that risk assessment is a viable economic activity.  Professional insurers - level headed business people - accept the scientific evidence of the reality of global warming and climate change2,3.

I have already given credit to others for their predictions and observations in previous articles, such as Petermann Ice Island Revisited.  Here, I shall focus on my own predictions to give a context to the current event: the breaking in two of the ice island..

I first predicted the imminent calving of Petermann Glacier, July 17th 2010, in my article Arctic
Ice July 2010 - Update #3: " I predict some dramatic calving this year."

The image, which I published July 17th shows where I expected to see fractures develop due to mechanical forces in the ice.  I then predicted, in Arctic Ice July - Update #4, July 22nd 2010, "The Petermann ice tongue looks primed to lose a few fairly large floes any day now."  I meant that I expected a large area to break up into substantial ice islands.

The calving was first reported as a news item on August 5th 2010 here at science20.com in
Arctic Newsflash! Petermann Ice Tongue Loses Huge Chunk, 24 hours before any other news outlet.  I was surprised that the area which I had predicted to calve survived calving intact.

The ice island drifted towards Nares Strait but then ceased drifting.  The ice island is tapered from front to back, as is the entire glacier tongue.  The Petermann Fjord has never been fully surveyed.  The surveys which have been conducted reveal a sill across the fjord with a depth of about 200m at the edges to 350 or 450m at the center4.  If the sill is surmounted by piles of glacial debris, especially at the edges, this could impede the movement of an ice island of sufficient depth.  The deepest, hindmost part of the ice island is about 200m thick5.

Observing that the ice island moved forward again shortly after a spring tide - September 27th - I suggested that it might not move much again until the next spring tide - September 8th.  It appears to me that the ice island moved forward until its 'notch' stuck against Joe Island.  There was no journalistic 'smash' or 'crash' of ice against land.  The ice island was travelling at a very low speed.  Even so, given the huge mass, the momentum would have been sufficient to cause the mass to break across a pre-existing weak point.

I had already predicted that the ice island would not stay in one piece for long.  It hasn't. Note the meltpools and streams on the surface.  There are many cracks and stress points, so this ice island is most unlikely to stay in one piece for long.  However many pieces it breaks into, those pieces will be impacted by hundreds of icebergs from the rapidly calving Humboldt Glacier  in passing through Kane Basin.  A series of ever-smaller ice islands will - I suggest - move in a stop-start fashion as they follow currents and continually run aground.

The ice island has not survived the short, slow journey from Petermann Fjord to Nares Strait as a single mass.  The chance of the two parts not breaking up further when they move at speed into obstacles is effectively zero.

In Nares Strait and Kane Basin there are many places where a tabular iceberg can run aground or be trapped.  Nares Strait is a warm water polynya.  Even when the sea freezes over, these ice islands will continue to be eroded from below by warm water.  In Kane Basin, until the sea freezes over these ice islands would be bombarded by hundreds of icebergs from Humboldt Glacier.

Very soon now, even if the Nares Polynya remains as open water, the sea will begin to freeze in Baffin Bay.  These ice islands, or their fragments, will not travel far until next spring.


Footnotes:
[1] - credit to FrankD for alerting me to this event.  I am following the A, B designations he uses in his comment.