Tweet
When I was a young classical guitarist in the 1980s, Yngwie Malmsteen was all the rage, and he made the term "speed metal" a part of the pop music lexicon. He played classical guitar, except plugged in, and really, really fast.

But now a guitar he played could be, though that's not even the most interesting thing to a science community. The interesting thing is the structure. According to the maker, Sandvik, a guitar they made which was tested live by Malmsteen and which is now up for auction has these features: 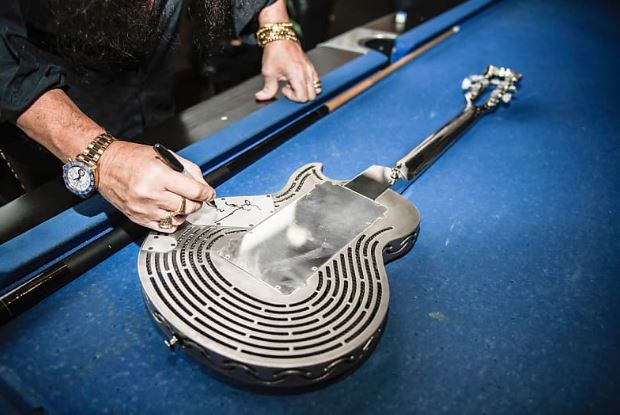 Using lasers to trace a design in beds of fine titanium powder, fusing layers of material one on top of the other. The layers, each thinner than a human hair, built up to make the body of the guitar.

The guitar’s volume knobs and tailpiece were also created with 3D printing.

The guitar neck and hub were made of recycled stainless steel and milled all in one machine in one continuous process.

Extra material was milled from between frets to meet Malmsteen’s preference for a scalloped fretboard.

He played it in Miami, where he now lives, and tried to smash it. He smashed it against the amp, against the stage. Nothing except some scratches. It was truly smash-proof.

And now it's up for auction, signed by Yng himself and the proceeds go to Engineers Without Borders Sweden (where Malmsteen is from).

You can place a bid here.