Tweet
Center for Science in the Public Interest is a litigation group which claims to be consumer advocates over eeeevil corporations. They were formed by a group who worked for Ralph Nader and specifically wanted to sue food and beverage companies. A few years later the two co-founders left, leaving Michael Jacobson in charge. Jacobson is a microbiologist so why he felt he could correlate infant formula to lower IQ in kids was a mystery.

Michael Jacobsen is also a sexist demagogue who'd be forced to resign if he tried to do today what he did to female PhDs who stood up to his uninformed conspiracy theories before social media existed - suggest such women were using their feminine wiles to get all of those male scientists to side against him. 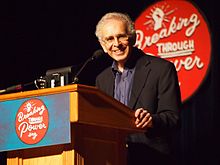 They have been wrong on nearly every issue. Do you like trans fats and palm oil leading to trees being cut down? Thank CSPI, who insisted that shoddy epidemiological correlation was the same as science, and got their political allies to repeat it enough that butter and animal fat became killers. Except they weren't killers. Then CSPI sued over trans fats they got put in place to replace animal fat. Do you believe a glass of wine causes breast cancer? I doubt any of them believed it either, but when the goal is to shake down companies, you don't need science - the minute you get a company to dignify your crazy claim by denying it you have won, and they are going to settle a lawsuit. The list goes on an on. If a bad epidemiology paper can link food to harm, they'll send out a fundraising letter about it and promise to sue.

Yet Jacobson is now gone, and maybe their old tactics are gone also, because they have turned on a former ally; the osteopath Joe Mercola. Why would a group that still seems to think Splenda causes cancer turn on someone whose audience overlaps so well with theirs? COVID-19 seems to have done it. They deny lots of science, but CSPI apparently refuses to deny that viruses exist, the way Mercola does.

They are so incensed about his latest efforts to make millions bilking the public using perfectly legal FDA loopholes that they are asking for him to be investigated. It took nearly 50 years, but CSPI has done something that actually benefits consumers.

Well, 49 years is a long time, but better late than never. Welcome to the side of the angels, CSPI. Though I bet pretty soon you'll be back to telling people bacon causes cancer.