Tweet
In 1692. the MacDonalds of Glencoe kept balking at swearing allegiance to King William III after the Jacobite uprising (basically, a secession promoted by France), so when they refused to take the oath for two years Scotland sent The Campbells to negotiate. And non-partisan history says they tried, ferrying messages back and forth while they were "billeted" by Clan Donald - a custom in Scotland since no one had much money. Clan Donald was hosted by the Campbells when they had been called on to police Argyll earlier.

The fix seemed to be in, though. Documents showed Sir Robert Campbell did not want to attack, his niece was married to one of the MacDonald sons, he sent evidence the issue was resolved, but they were finally told in no uncertain terms to attack, and did. It was a classic case of "setting an example" by government, punishing an unpopular clan to warn anyone who might think about being an independent country again.

No one seemed enthusiastic about the prospect even though the MacDonalds were unpopular, only about 25 members of Clan Donald were actually killed, and two units arrived too late to do anything, including the soldiers led by the fellow who ordered Campbell to attack. But there are whole songs written about this "massacre" and to this day some want to insist the Campbells just showed up, ate all their food, and then killed them for no reason.

Sometimes history is written by the losers, especially in a culture that was known for both exaggeration and a martyr complex. And Glencoe stories contain both. 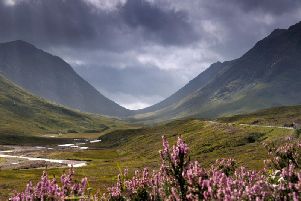 Some have now taken to claiming that the attack at Glencoe was George R. R. Martin's inspiration for the "red wedding" in his book A Storm of Swords, third novel in his "A Song of Ice and Fire" series, popularly known by the first book, Game of Thrones. Like Bigfoot believers, they can fit anything into the narrative. Yes, the Campbells and MacDonald's were in-laws, but so was everyone.

A recent archaeological expedition hoped to add some evidence during the attack that made Glencoe famous but only ended up finding a "lost" village from 60 years later. The reason is obvious. Scotland has been settled for thousands of years so when two dozen people were killed 400 years ago they rebuilt. Each of the three villages on maps from the time had about a dozen buildings but there is little left because Scots re-purposed stone and wood. The remains of an inn were still there.

If something happened in my neighborhood tomorrow there wouldn't be much evidence of it 400 years from now either. So Glencoe remains a romantic drama with little evidence that anything different happened than what the historical record shows.