How Robert F. Kennedy Jr. And American Activists Are Spinning Coronavirus For Their Agenda
By Hank Campbell | April 2nd 2020 09:46 AM | Print | E-mail

Tweet
The organic movement and the anti-vaccine movement often go hand-in-hand in the United States - there is a reason Organic Consumers Association will proudly host talks by noted anti-vaccine zealot Robert F. Kennedy, Jr. - and while I predict the SARS-CoV-2 pandemic is the beginning of the end for 21st century chemophobia (chemicals that work are flying off shelves while "green" cleaning products gather dust, even here in California), and the anti-vaccine movement (this is the world without one vaccine, imagine if we had none), and the organic food movement (if you can't find food at your grocery store, go to Whole Foods, they will have plenty of overpriced stuff no one wants when they are worried) - those groups will not go down without a fight.

The philosopher Vandana Shiva, Ph.D., for example is saying conventional farming caused this pandemic, by weakening animal immune systems so that ... well, none of it makes any sense, her audience is as clueless as she is - and famed anti-vax lawyer Kennedy is also doubling down on woo.

Meanwhile anti-science loonybird Robert F. Kennedy Jr. is finding ways to spin this pandemic for all of his kooky beliefs, like that vegetarians won't get it, a 2025 MPG car standard would've prevented it, and that cell phones used by kids during it will cause cancers. 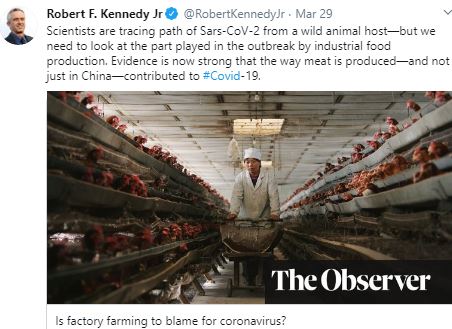 So, vegans can't get coronavirus. Got it. 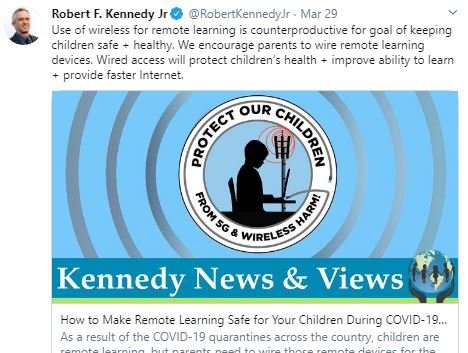 Cell phones still cause cancer but schooling at home will mean more, unless the Internet is on a LAN cable. 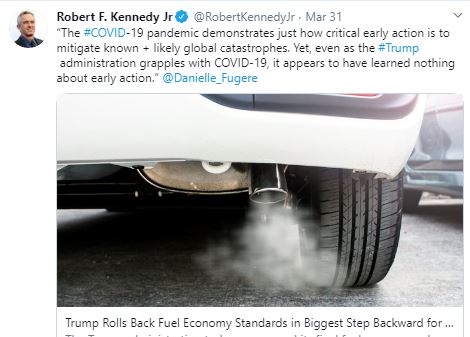 Coronavirus was caused by not continuing with a car MPG standard that wouldn't take place for 5 more years? It jumped into the past to cause this? 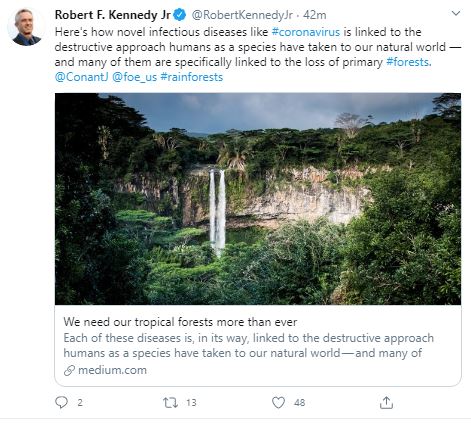 If Friends of the Earth had any sort of cultural radar, they would run from Kennedy like he had just pulled the pin on a grenade. While he's no longer a heroin junkie there is no way to yet know if he's still hiring people who engage in illegal animal trade. And wet markets in Wuhan, China with exotic animals was a key factor in this coronavirus spread.

On the other side, there are legitimate environmental groups that are proposing solutions to future outbreaks; Wildlife Conservation Society, for example, wants illegal animal trade curbed. That's admirable because it's risky. Groups in the U.S. are not even allowed to mention that the pandemic started in Wuhan while China government closed those disgusting wet markets that they say caused it, so WCS noting that Asian culture is the apex of mystical exotic animal consumption and shamanistic beliefs about health threaten real blowback from political allies. WCS are to be commended for addressing the real source of these problems instead of manipulating a pandemic to suit their political agenda.