Tweet
A U.N. report last year estimated that emissions needed to drop by nearly 3 percent per year to keep warming below 2 degrees Celsius. If that model is accurate, temperatures will start plummeting because in April alone emissions dropped 17 percent.

While that is good news, the concerning news is that the world economy also lost $4 trillion. It isn't like one of those dopey 'don't buy on Tuesday to punish gas companies' emails - if you buy gas on Wednesday it makes no difference to their revenue, since you drove and used gas the day before - in this case companies are going out of business. A restaurant that closes can be replaced by a new restaurant but it won't be at the higher lease cost of the old one if the economy is bad. States with high minimum wages can mandate that companies pay those, until companies don't replace the ones that have gone bankrupt. 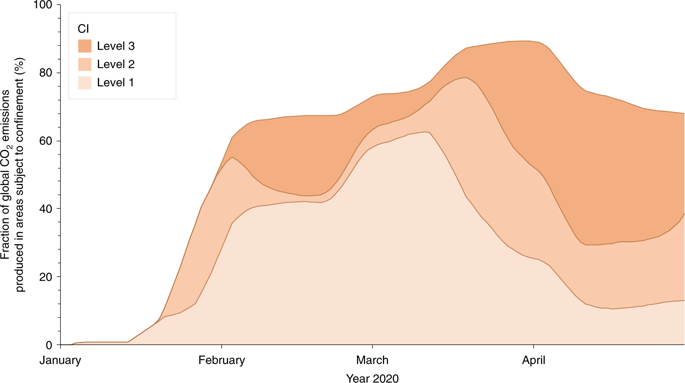 If subsidized health care is to remain solvent, doctor salaries will decline. Health care workers will go on strike. The gig economy won't be for poorer people who must be made employees, as California insists, it will be the norm. California alone has $500 billion in unfunded liabilities and lost another $50 billion last month. They want taxpayers nationwide to pay California the difference but where will that money come from?

Have we really made progress toward curbing emissions because rich countries stopped driving and flying? No. An estimate last year claimed that emissions needed to fall by 7.6 percent each year to meet the Paris Agreement’s goal - but the Paris agreement let countries pick their own way to meet their goal, including increasing emissions but not increasing them as much as they would have if they did nothing. If developed countries - already with incredibly clean air, so clean activists had to manufacture concern about small micron particulate matter, PM2.5, virtual emissions, to keep us on red alert - suffer to try for perfection while the rest of the world exploits emissions loopholes in the Paris Agreement, the way countries are exploiting Hollywood studios and poaching progress because California remains shut down, we turn leadership over to the polluters. That's very bad.

Lower emissions are great but there is a flaw with simplistic models that only care about one variable. A 6 percent drop in the economy worldwide is going to hold back developing nations most. They are the ones with a billion people who currently use dung and wood for fuel and have no centralized energy - because we tell them they can't use anything but solar. In developed countries higher emissions cars will stay on the road longer if the world remains mired in depression. For people who can work from home, this has been a fine short-term solution; as long as farmers and ranchers keep farming and delivery drivers keep delivering.

But they won't when deflation starts to happen.

So let's be happy about lower emissions but let's not allow progressive journalists in east coast corporate media who don't understand science or economics to pretend that this is financially sustainable. It is not. Yes we are fortunate that even generous counting of COVID-19 fatalities won't reach influenza levels of most years, but calls by people who can do their jobs on a keyboard to sit at home for three more months are in defiance of reality.