Tweet
In the 1970s, oil-producing countries in the OPEC cabal had the ability to control western countries using prices and supply. After a series of such crises in the 1970s, Americans began to develop two things; modern synthetic oil and lithium-ion batteries. First in line to get off the petroleum fixation was Exxon

Stanley Whittingham of Exxon was interested in superconductors and discovered that a titanium disulphide cathode could store lithium ions. Using a battery containing metallic lithium (lithium was discovered by humans in 1817 and valuable because it will readily release electrons) held a lot of promise, but the metallic lithium was explosive. This was not pure lithium, it was a salt, so no labs were burned down in the process. 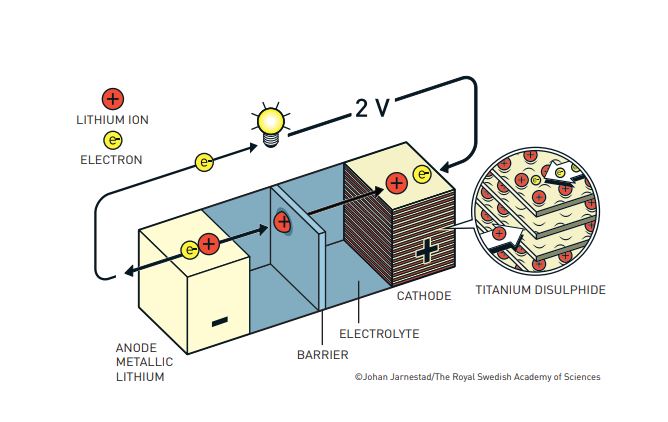 Once President Reagan took office, he broke OPEC and prices plummeted so the synthetic oil program created by the Carter administration was abandoned, but lithium-ion batteries were much less political so they were allowed to continue as basic research.

John Goodenough worked at a government lab and they had a lot less independence than Exxon, where Whittingham said his proposal took 15 minutes before management fully funded it. So he went to Oxford and found a metal oxide would be better than a metal sulphide so he came up with cobalt oxide containing lithium ions- and it produced twice as many volts. With that in place, Akira Yoshino of Asahi Kasei Corporation replaced the reactive lithium anode with petroleum coke, and he created a battery that used lithium ions flowing back and forth between the anode and cathode rather than legacy chemical reactions which broke down electrodes.

In 1991, the first commercial lithium-ion made its debut and can still be found in numerous portable devices. Lithium-ion is actually the last great breakthrough in battery development, which is a crippling weakness in solar power viability.

And we can thank cooperation between the private and academic sectors for the achievement, something still common in other countries but lacking in the U.S. today.