Tweet
In 2007, with a majority in both houses of Congress, Democrats set out to force science and technology out of the free market and into government mandates. By replacing spoons in the Congressional cafeteria with corn-based alternatives they were going to kill plastic, and by banning incandescent light bulbs they would save us all from...something.

Well, plastic didn't die, the alternatives were actually annoying to everyone. The spoons melted in soup, the knives broke, people ended up using twice as many of them to get through lunch, and it cost a fortune. It also didn't help the environment to have the garbage shipped to Virginia in emissions-belching trucks where they were maybe composted.(1) The technology was not ready.

The other thing they set out to do was get rid of regular light bulbs, which meant giving out giant subsidies for CFLs - compact fluorescent lights. CFLs were the kind of thing you expect government to endorse. They were more expensive, looked creepy, and if you broke one you'd need to wear a Haz-Mat suit to clean up the mess. Existing light bulbs in lamps wasted a lot of energy in heat, anyone who has used an E-Z Bake Oven can tell you that, but at least they were affordable. The regulation promised to drive up cost for the poor and help nothing.

Government created a regulation against bulbs without creating an efficiency standard

But then at the end of the Obama administration, in a flurry of midnight regulations, they decided to make obscure remaining light bulbs more expensive too. But it would not impact the poor, unless poor people had chandelier bulbs and track lighting in bathrooms dooming us all. They created a rule to remove their exemption from rules that had already gone into effect for desk lamp bulbs, without determining what an efficiency standard for the new bulbs should be. Or what the impact would be. 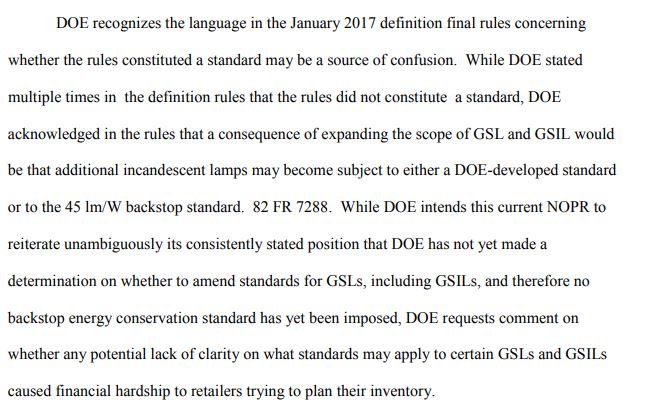 In February of this year the Department of Energy conceded the legal basis used to pass the new regulation would never survive in court and scheduled to withdraw it. They did that today and the New York Times and their official trial lawyer group, Natural Resources Defense Council, said global warming would spike. And said they were going to court to force the government to implement a regulation that had never gone into effect which had no standard that replacement bulbs needed to meet and was therefore illegal.

Those chandeliers bulbs and bathroom track lighting are not the problem

It seems a little ridiculous for NRDC, Sierra Club, Earthjustice, et al. and their favorite journalist, John Schwartz, to insist that if we don't over-regulate recess cans in kitchen ceilings we face an apocalypse. This decade, even with all of those grid straining electric cars added into use, home electricity use dropped by 6 percent. Which Schwartz cites in his article as reason not to cancel an unspecified standard that had nothing to do with it.

it seems dishonest he would claim this is a 2007 rule passed during the Bush administration when it was a 2017 passed hours before President Obama was leaving office, more like a presidential pardon for environmentalists than sane policy.

We know the decline in energy use was not due to CFLs - the government's solution to better lighting efficiency the way they once believed better iron lung machines were the solution to polio - because everyone hated those. It was due to LEDs.

People lined up to get their kids polio vaccines, even in Phase I clinical trials, and they lined up to buy LEDs, not because it was a government mandate but because they saved money by using electricity. And unlike CFLs, LEDs are not creepy.

The free market did that.

The free market not only won on energy efficiency, it won on emissions. Though the Supreme Court threw out President Obama's Clean Power Plan in 2016, before it was ever enacted, the same New York Times paper quoted NRDC calling Republicans anti-Gaia. But they ignored a salient fact - by 2017 the free market had reduced energy emissions to levels the Clean Power Plan would have mandated by 2025. It was a regulation with no reason to exist.

Just like lightbulb bans for T-shaped reflectors have no reason to exist.

Despite the facts, NRDC got the New York Times to promote the notion that Big Incandescent Bulb is going to come riding back on a pale white horse(2) unless even more obscure light bulbs are banned, like in mining service lamps.

I never bought a CFL, even when incandescent bulbs were going extinct. I knew LEDs would be ready soon. PG&E here in California certainly tried. They gave away a million of them, but they didn't cost PG&E a penny. Those costs were all borne by the same poor people who are forced to subsidize million-dollar solar installations on Malibu.

(1) A budget investigation found it so shockingly expensive that the outgoing Democrat in charge of the cafeteria recommended to the incoming Republican that he cancel the program because of the cost and annoyance. The Republican did and House Minority leader Nancy Pelosi immediately declared that Republicans were giving Congressional staffers cancer.

(2) What would the other four horsemen of the environmental apocalypse be? GMOs would have to be in consideration. BPA? Fracking? Glyphosate? Baby powder?