'Oceans Are Warming Faster Than Thought' Retraction Is A Win For Post-Publication Peer Review
By Hank Campbell | October 1st 2019 06:32 AM | Print | E-mail

Tweet
An ocean heat uptake paper published in Nature has been retracted, and it is a credit to the authors for pulling it, but it's also an indictment of the kind of insular culture that corporate peer review creates.

Especially when the science is a political hot potato like climate, where no one wants to be critical lest they feel like they are aiding global warming deniers. Or worse, being labeled that themselves as part of a #cancelculture agenda.

I have long joked that while science academia is overwhelmingly liberal, peer review is conservative. Competitors of your work are going to go over it the way Sprint engineers fact check Verizon cell phone service claims.

But what about when competitors are not allowed to fact check? Is the 'look elsewhere effect' creating false confidence? For that we have post-publication peer review. Ironically, that is also going to be more prevalent in a hot button area like climate studies than it is for something journalists just casually rewrite, like press release claims of 3 billion fewer birds. 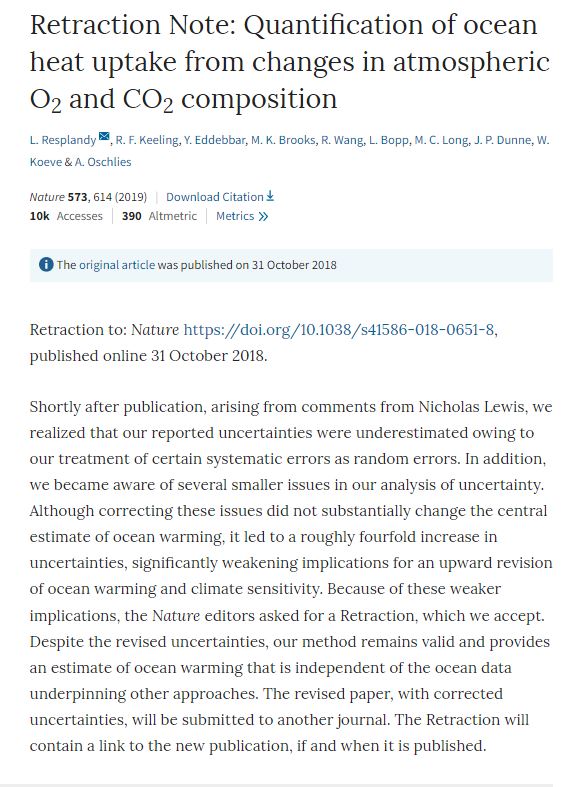 Nic Lewis looked at the Resplandy et al. ocean heat uptake estimate and then looked at their statistical methodology and showed their results were overstated and their uncertainty greatly understated - by up to 400 percent. The authors conceded the points, made some corrections, which caused other issues, and finally agreed with the journal's request to pull the paper back, presumably to rework it and publish it somewhere else.

The problem is that retractions get little coverage. Retraction Watch is going to address it, sure, but the widespread coverage it got (similar to supposedly 3 billion fewer birds) will never be matched by the criticisms or the withdrawal of the paper.

It may be time for science journalists to stop pretending that peer review means what it used to mean. There are now 50,000 journals out there, there are not enough experts to review them all, and so 'editorial review' ("this looks like data") has become common, but as science has become more data heavy, statistical methodology has become more important. And most scientists are not as strongly grounded in that as they are their core research fields.

Journalists covering the new IPCC report, or at least the media kit, are not going to know that IPCC used this paper despite it being flagged almost immediately and being the subject of debate for the last 10 months. The authors of the retracted paper told Retraction Watch IPCC probably meant to cite a different paper by many of the same authors.