Tweet
In an April 2020 email discovered by Buzzfeed as part of a Freedom Of Information Act request, EcoHealth Alliance head Peter Daszak thanked Dr. Anthony Fauci for dismissing concern that SARS-CoV-2, which erupted in 2019, could have come 'from a lab.'

A lab like the Wuhan Institute of Virology, the world's largest coronavirus lab, which Daszak gave $3.4 million in US taxpayer funding to, in order for them to study bat coronaviruses. The 'thank you' was while the lab was removing its database of 16,000 bat coronavirus samples that the US helped pay to create and while denying the World Health Organisation permission to visit.

They continued to block out WHO for months, and only let them in at all when an ally at the UN group, former Beijing resident Peter Ben Embarek, was picked to head the team. He dismissed the notion that the world's largest bat coronavirus lab in Wuhan could have been involved with a bat coronavirus outbreak in Wuhan caused by a variant that did not exist naturally within 1,000 miles of Wuhan and repeated the dictatorship's claim that American food probably caused it. 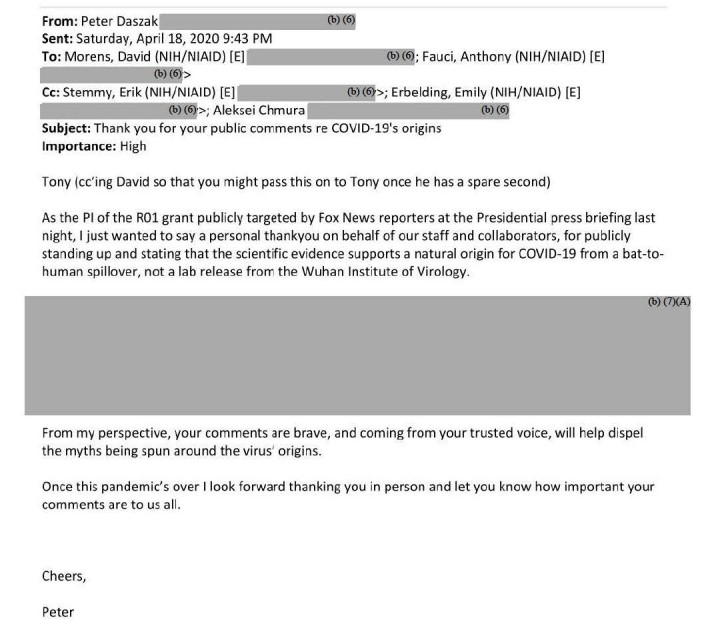 “I just wanted to say a personal thankyou on behalf of our staff and collaborators, for publicly standing up and stating that the scientific evidence supports a natural for COVID-19 from a bat-to-human spillover, not a lab release from the Wuhan Institute of Virology,” Daszak wrote to Fauci.

What an oddly specific thing to need to defend. Almost like he got told he needed to defend them right after WHO stated that journalists had to stop calling it the Wuhan Flu. Anti-science activists were critical of EcoHealth because they don't know enough about research to realize that a bat coronavirus is not a GMO, and they have been strangely silent since the US election replaced President Donald Trump, a Republican, with a Democrat but President Biden is not playing along either. He is no longer claiming a lab origin was just a silly conspiracy theory and has US intelligence agencies looking into it again.