Tweet
The worst-kept secret in student loans is not that the same party now wanting to force the rest of us to pay them off put unlimited student loans into law in the first place, nor that wiping out loans will never survive court challenges and was always a political stunt, but that the biggest beneficiaries, proponents, and defenders are and have always been universities.

With loans unlimited, so are salaries and buildings and administrators. And grifts.

For example, once upon a time, Columbia University sold students - old enough to vote, not old enough to be less gullible in other ways - a 2-year program in 'Environmental Journalism' for $80,000.(1) The names change but the marketing efforts persist, even if it's something that is pointless as a degree, like...farming.

Writing in Ag Daily, Amanda Zaluckyj notes that Maharishi International University (most famous in the science community for producing Yogic Flying Instructors) is now selling new alternative guru stuff - a degree in regenerative agriculture. They're pretty well-known in organic woo circles - John Fagan and Paul Mills and Jeffrey Smith will do that for you - so regenerative agriculture aligns with their business model.  If you believe you can levitate using your mind or in any other magic you probably also believe organic food is viable. 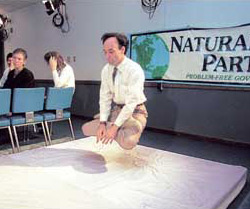 We have exposed how regenerative ranching is a scam and the whole organic process is no different. Find one of 80 companies that make all their money selling organic stickers and they will certify you and sell you an organic sticker. Even if you grow conventional food side-by-side. No surprise spot checks ever, like regular farmers have to endure. Then you pay a few thousand dollars to Non-GMO Project and you get to throw that on the label, no testing needed.

The strangest thing is not that they offer the degree, but that they know someone will pay for it.
A degree does not give you credibility in farming any more than it does journalism. Not only don't you need a degree for either, the time and money you wasted would've been better spent working, no differently than The Beatles bypassed majoring in music.

(1) The average salary for journalists is $35,000, and environmental journalism is such a niche it's probably even less. We don't need journalists to tell us that clean water is important, and 98% of Twitter is yelling at Republicans because they don't want to bankrupt America by switching to 100% solar power, an environmental journalist is irrelevant in that. There was a time when journalists in niche fields were prized. Music journalist, travel journalist, film critic, you name it and in the glory days of newspapers someone was getting paid to do it, but they are so few now they're more like gimmicks.