Vaccines and Autism Concern Is No Longer Just a West Coast Thing - Now Only 45% Of The Country Accepts The Science
By Hank Campbell | January 14th 2020 04:08 PM | Print | E-mail

Tweet
Once upon a time, if you were going to find a pocket of concern about vaccines and autism in America, you had to find a relatively small radius around a Whole Foods store. Rich, white people, who bought organic food and lots of supplements were going to over-represent when it came to denial of vaccines.

What had been through the 1990s only a tiny number of people in a few religious cults suddenly took off in the 2000s among their opposite - the educated wealthy in liberal states. Some schools, like in Marin County, California, outside San Francisco, had under 30 percent of kids vaccinated. The situation got so bad that California finally passed a law to prevent parents from enrolling kids in schools if they were going to expose those with weak immune systems to preventable diseases, then those folks, from LA to Eureka, found doctors to give them medical exemptions.

Oregon and Washington were much the same but it was still just the kooky left coast.

No more, a new Gallup poll shows only 45 percent of the public are sure vaccines don't cause autism, despite every medical group, scientific group, and government agency noting that is impossible. 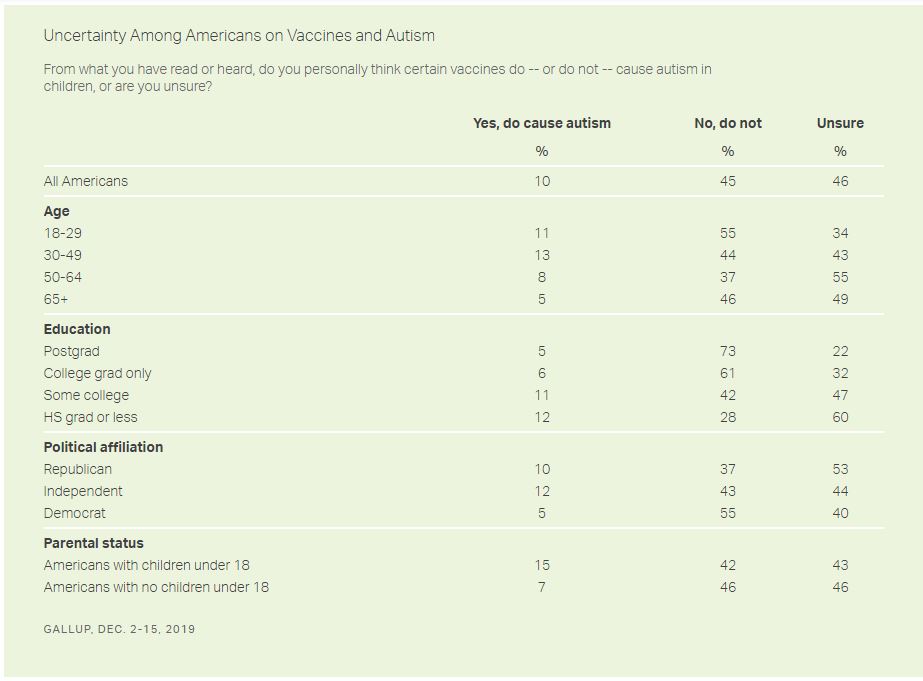 Some of the data are fuzzier. Only 84 percent regard vaccines as important, down from 94 percent, but there are more vaccines than in the past. The HPV vaccine finally seems to be over the hump, for example, but it had early uptake issues because it wasn't great, and the flu vaccine is in there. Lots of people don't think the flu vaccine is necessary and many always have, but in a season where models anticipated the flu poorly skepticism about the flu vaccine will go up.

On vaccines and autism, only 10 percent truly insist one is caused by the other, but 45 percent are unsure, and that is cause for concern.