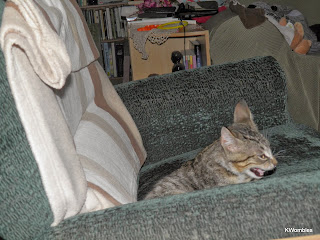 Maybe Nosferatu was a good name for this cat after all. He loves to leap at our legs, clamp on with his front claws and start chomping. Same for our arms.

Cujo the cat would have been a good name, too. Still, he's a lovely animal; even when his little teeth are trying to break your skin. 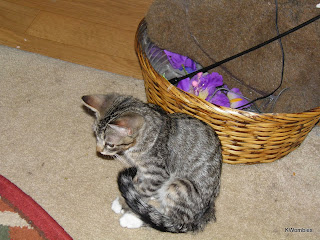 I guess we all have our moments, some where we're sweet and others when we are vampire-like, trying to do as much damage as possible to another. Sometimes we inflict damage when we're just playing, or even when we're just making an offer (or an observation).
Now, you're no more surprised than I am that I'm going to talk about elevatorgate (good summary here), privilege, and a bunch of skeptics engaging in a massive hissy fit. But all this has dominated the skeptic blogs this last week (I'll provide as complete a list as possible), with thousands upon thousands of comments offered on the various blogs.

Why bring it up in context of a cat who goes from being a sweetheart who sleeps cradled in my arms like a baby to hell on wheels trying to gnaw my flesh? First, because I can. Second, because it's important to point out that one snapshot in time, one badly worded statement in time, does not necessarily reflect the entirety of a person's character, except when it does reveal the important things.


We don't know the dude who asked Rebecca Watson at 4 in the morning in the elevator back to his hotel room. Was he clueless? Was he creepy? Was he socially awkward (or on the spectrum)? But from Watson mentioning this situation and saying that guys shouldn't do that, all this has exploded onto several blogs, privilege is being discussed, the role of women in the skeptic community is being discussed, and directives on how to behave at TAM this year are being offered.


Privilege is being thrown around in the comments, and even more charges of privilege being thrown around are being offered. Privilege and the discussion of it is not confined to the feminist world. It is a concept used in all of the minority communities I've had the opportunity to spend time exploring. Sometimes the allegation of privilege is fairly charged, and the opportunity to learn and grow and change is there for those involved. However, there is a dark underbelly to some of the minority communities where individuals charge the other person of privilege in order to push around the other person and it's about anger, bitterness, and some serious gnawing. If the "privileged" person points out that privilege doesn't apply in this instance, then she is usually hit with the charge that everyone wants the unprivileged person to play nice. It's a no-win situation in this case.


I don't wade into these sorts of things often because it is usually a pointless, messy thing, and let's be real: I have enough areas in my online life that engagement is pointless and messy.


Rebecca Watson doesn't deserve the vilification she's gotten for pointing out that trying to pick up someone in the elevator can be fear-inducing (and for good cause) for the woman and that decent guys should recognize that and not do it. She doesn't deserve the rape threats she's getting, either. No one does and the people who are making these threats are leaving a snapshot that reflects poorly on their character. Decent people do not do that. Ever. You don't threaten to rape, harm, or kill other people and get to pretend you're an upstanding person.


Richard Dawkins was a jerk for his comment at PZ's. There have been a lot of jerks in the comments at the blogs dealing with this. Dogpiling on Dawkins at Skepchicks, well, having women explain why it's wrong when he asked in a later comment for some explaining, maybe that's overkill for some folks? But maybe it's not. After all, Watson's still getting the threatening tweets.


Maybe dudes ought to stand up and say that this isn't cool. That women have the right not to walk around afraid someone who disagrees with them will assault or rape them. That's not asking for too much.


And for guys who think women are overreacting, according to RAINN, "60% of sexual assaults are not reported to the police." In addition, "Every 2 minutes, someone in the U.S. is sexually assaulted." Still not getting it? The US Department of Justice reports that "1 of 6 U.S. women and 1 of 33 U.S. men have been victims of a completed or attempted rape."


Treat women as something other than f*ck-buddies. Consider their perspective before you decide that you're God's gift to them and they should be all over you wanting a piece of what you have to offer. When one of them offers up the comment that it's not cool, don't show your complete lack of respect for her as a human being by snidely pointing out that Muslim women have it worse, because you've just revealed that you don't think women are equal. Another snapshot where your character's showing.


And perhaps a larger lesson here is that if one was under the impression that skeptics were better, more decent human beings, reality has shown that skeptics are as prone to being asshats and chauvinists as anyone else. Humanists, on the other hand, one could hope, have higher aspirations. Skepticism and humanism do not go hand in hand, though, and it's a mistake to assume they do.


Links for anyone who hasn't dipped a toe into these waters and wants to get gnawed on:

The video that launched it:
ABOUT MYTHBUSTERS, ROBOT EYES, FEMINISM, AND JOKES

ON NAMING NAMES AT THE CFI STUDENT LEADERSHIP CONFERENCE


THE PRIVILEGE DELUSION
Other posts:

Others:
http://blogs.discovermagazine.com/badastronomy/2011/07/05/richard-dawkins-and-male-privilege/
http://bigthink.com/ideas/39234
http://www.salon.com/life/feature/2011/07/08/atheist_flirting/index.html  There are other posts hyperlinked in the text, as well. If you have links to this mess, please add them in the comments.