Kim Wombles
Before getting to the review, I thought I'd share some of the lighter side of what comes from actively engaging people who think vaccines are responsible for all of today's ills.

You know you've spent too much time on the internet when you dream that  Seth Mnookinborg (fascinating combination, no idea why, except for anti-vaccine folks linking all of the science-based writers together in various combinations that have me as a minion, an accolyte, or even Orac-in-a-skirt) is advising you on something related to blogging about vaccines.

Before this sends any of those pro-safe-vaccine-cuz-those-things-are-teh-very-evil people scurrying to whisper that we are indeed all in collusion with each other, let me just take a moment to acknowledge how right they are (some of the following are not true).

We are in collusion with each other.

We take our marching orders from Lord Draconis (whom you can find occasionally posting at Orac's to give us our next set of orders).

We are worker bees in a vast army, though, and work for a pittance.

We know our reward awaits us when we have won the battle for reasoning and making evidence-based decisions instead of relying on the paranoia of a handful of extremists on the internet.

Many of us meet at skeptic conferences each year. (That would be cool! Skepchick gave out 11.5 grants this year so 12 women could attend The Amaz!ng Meeting this year.)

Many of us are friends and talk amongst ourselves. Yes. We have facebook pages, too, among other more nefarious ways of communicating.

At any rate, when blogging has entered your dreams, along with snippets of conversations and posts, it's easy to realize how large a part of your life writing has become, along with  the particular areas of interest you have. Vaccines as a preventative strategy to avoid potential infections and prevent suffering and death is one of my interests. Not a big suprise, is it, really? 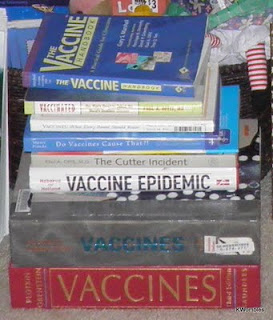 Not pictured above are Offit's newest books, which were by my bed when this photo was taken. Yes, for a time  there I slept with Offit's work. Hey, for a time, Vaccine Epidemic was my bedtime reading. There's a reason I dream this stuff. It's what I'm thinking of before I drift off to sleep. That and dark matter. And critical thinking, among the other weird stuff I read before bed. Go figure. The book on the plague, however, I quickly realized was not bedtime reading material. Trust me on that one.

Paul Offit's new book, cowritten with Charlotte Moser, Vaccines and Your Child: Separating Fact from Fiction, made for much better bedtime reading.  If you're already well-versed in the various anti-vaccine concerns, this book covers territory you're probably already familiar with. It's well worth the read, though, and if you routinely recommend reading material to parents concerned about vaccination, it's a good idea to read what you're going to recommend.

This book is easy to read and answers those questions that have been raised by the anti-vaccine movement. It provides references at the end of each of the sections, and for parents who haven't already decided he's all the negative things that anti-vaccine sites insist he is, the information is helpful and should allay many of the fears. Offit's role as an inventor of the rota-virus vaccine is not hidden away, and despite the allegations that many anti-vaccine people make, Offit doesn't deny or hide that adverse reactions do occur. It's a level-headed look at vaccines and the importance of them, along with potential risks. It's replaced my previous book recommendation, which was Do Vaccines Cause That?! for concerned parents (although it's a very good book, providing as updated information as possible is important and Offit's book covers new ground).


Parents are right to be concerned about the interventions they choose to use. That's not what the vaccine wars are about despite the anti-vaccine's movement to convince people that it is. Everyone is for making medications and vaccines as safe as possible. No one denies that medications and vaccines do carry risks, and trying to figure out if they're to blame for a later illness or medical issue is difficult. We're hardwired to make connections between events, and it is only through scientific research that we can really know if two events (vaccine and a later event) are connected. Despite parents' assertions that they know what they saw, anecdotes after the fact (especially years after the fact) make poor evidence.


In addition to providing access to good information like the pamphlets from Immunization Action Coalition and Offit's (and others') books, doctors need to work harder to communicate better with parents. They're not going to be able to do that when they only allot 15 minutes to a patient. And when a parent comes in and is concerned about a child's development, the doctor should never brush it off, just as a call about an adverse reaction should never be brushed off; recommending a trip back to the doctor, to the walk-in clinic, or to the ER is a reasonable respone to a parent complaining about a child's high fever, non-stop crying, or other more serious symptoms. The fear about vaccines and the fear about autism have comingled in part because the first-line responders have in general done a terrible job of recognizing developmental delay problems and taking them seriously.


There are a lot of things that parents and health professionals could do to make sure that parental concerns for accurate information are addressed. We need to work better at this so that misinformation has less chance of being accessed and accepted as true.