Edward "Henry" Brown
The field of physics attracts crackpots. It is impossible to completely avoid them, and after a nasty incident in 1952 with an actually mentally ill individual who was upset no one would listen to his theories concluding electrons don't exist, the American Physical Society decided to give up trying to avoid them. A membership and willingness to pay a fee will guarantee you the opportunity to share your ideas at major APS meetings. This may shock some people outside academia (and this may not be clear to everyone in physics either), but overall it has had reasonable support in the physics community. 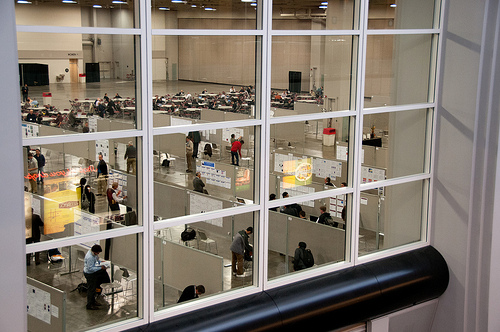 Presenters preparing for a poster session at an APS meeting.  The posters will hang throughout the meeting, but at assigned time slots the authors will be present to discuss their work.  If you pay for a membership and conference fees, you too, physicist or not, can present your physics ideas. Credit: Jonathan Reyes/Flickr, "Through the looking glass", CC BY-NC 2.0
Sometimes this policy causes a bit of friction at meetings, but usually it is like there is just a separate group who are mostly ignored but still get to be involved by attending the physics talks, presenting material, and asking questions (within reason).  Once I made the mistake of sitting in on a "crackpot session" at an APS meeting thinking it would be somewhat entertaining to see the powerpoint presentations and hear questions, but it ended up being depressing instead. From what I've seen, the friction is hardest on those that get assigned a poster session, since they aren't as well separated.

When trying to talk to a gradstudent about his research once, the man at the poster next to him insisted I take a pamphlet on how he came up with a revolutionary theory of quantum gravity by positing quantum mechanics is wrong about everything except the word quantum which actually refers to indivisible elastic aetherons forming elastic space.  Truly fringe theorists so want people to listen, that I've been handed custom keychains, matchstick boxes, and pens, all with equations or slogans on them and sometimes weblinks.  Some are even dedicated enough to self-publish books.

Eventually, while it sounds awful to say, you learn which people to avoid making eye contact with, otherwise they'll take it as an invitation to "sell you" their ideas.  Please don't take this the wrong way though; these ultra fringe or crackpots or whatever you want to call it, are by far a minority at meetings.  The "signal to noise ratio" is still plenty high that the meetings are still well attended.  So by that measure, the policy decision of APS regarding crackpots worked.

Individuals on the other hand have incredibly varied ways of handling crackpots or even what they consider a crackpot, from the incredibly abrassive who liberally apply the term, to amazing tolerance, including the truly extreme case of a University of Chicago Professor discussed here (too bizarre for a short description to truly do it justice, so I suggest any who are curious to watch it yourself).  So its no surprise that on Science 2.0 the responses runs the gamut -- poking a bit of fun, trying to convince purveyors of pseudo-science the burden of proof is on them by presenting challenges, or commenters like David Halliday with seemingly infinite patience in teaching.  But in my experience, most people have some personal filters or guiding rules for deciding whether to cut a discussion short, such as Doug requesting new theories meet a certain level of rigor or Tommaso requesting new predictions.

For me personally, I define a crackpot as one who pushes incorrect science claims and for whom no amount of logical reasoning, math, or explanations appears to be able to allow them to learn or convince them of error.  Often crackpot will help out in this regard, and openly declare nothing can convince them otherwise regarding their theories.  To me its not just the idea someone suggests that makes them a crackpot, for someone merely making stupid mistakes, or that curious 5 year old asking if atoms are just tiny grapes, are not crackpots because they just don't know any better and can still have a lot of learning ahead of them.  Its when they push nonsense as science regardless of logic, that they cross that line.

Consider the following scenario:
There's a physics discussion on the internet (probably already a red flag), with a stubborn poster, who disagrees with physics references, continues to harp on math points that are incorrect, and does so even when it has been explained ad nauseam these math points are irrelevant anyway. Other knowledgeable people on the topic have confided disagreement with this person's claims, which does not appear to phase the individual, and all discussion attempting to find some basic physics and math common ground to build from has failed.

Is this person a crackpot?

If that is true, then by my definition, yes.  But here is the kicker. Everything I just wrote there probably describes ME from the viewpoint of a physics professor from Chicago.

Yet simultaneously, I feel similarly frustrated as from my viewpoint those same things describe physics professor Hontas Farmer, regarding discussion on her paper which was introduced on Science2.0 and can be read for free at TheWinnower.com.

This is the main problem with labels like crackpot.  It presupposes it is obvious who is pushing nonsense as science.

While we may not like to openly admit it, the credentials of who is talking and consensus of those we know or trust (possibly due in part to their credentials), factor in to how we personally evaluate scientific claims.  I don't have the biology chops to understand all the details of retroviruses, nor the ability (or desire) to run experiments on them myself, so when it comes to AIDS denialism the best I can do is apply the basics of logic to what I read and ultimately trust the research data from experts. Luckily there's a very clear consensus.

These kinds of trade offs of trust vs personal effort and knowledge are inevitable, but of course the principles of science are not dogmatic consensus or arguments of authority.  That is not how science works.  All the "rules" and "filters" of dealing with crackpots are just to save time. To many who liberally use the phrase crackpot, that appears to be the entire point of the label: pointing out who we can safely ignore to save our time (and maybe our sanity if we chose to engage them in debate).  In that narrow sense they may be helping others.  Only if we had infinite time and didn't mind wasting a lot of it, could we actually evaluate all fringe claims using logic, mathematical reasoning, or experiments.

As Thor Russel recently pointed out in a discussion of this very debate with Hontas, it is easy for humans to fall prey to the overconfidence effect. And as a different commenter pointed out, it's possible that someone "does not know enough to understand the degree of the mistakes being made both in the mathematics and in self-evaluating skill levels relative to others in this discussion. This is the Dunning-Kruger effect, which I believe can be overcome with sufficient teaching effort. Even if my efforts end up wasted, I feel it is better to try than to presume the individual 'unteachable'."

So then, when two people with advanced physics degrees both feel the other is making basic fundamental mistakes and disagreeing with references, and attempts at finding common ground in the math have failed -- How then, can either know THEY are not the crackpot?

That, is the conundrum...


To be absolutely clear here, Hontas has not called me a crackpot and I am not calling Hontas a crackpot, nor am I calling myself a crackpot.  However I AM saying that if no amount of logical reasoning, math, or explanations appears to be able to allow learning to occur and convince someone of error, then at least one of us IS a crackpot.  I hold out hope that learning can occur, and neither of us are a crackpot.  But hope is thin, science marches on, and one of us will likely be left trapped in the disconnected worldview of a crackpot... and never know it.
Curious Puzzles
More Articles All Articles
About

I love tinkering with puzzles. Whether a physical experiment or a thought experiment, there is more knowledge in modern science than can fit in...