Metaphors are an important way to facilitate understanding of new processes.  This metaphor is constructed based on the similarity of a rocket’s and civilization’s  transition from one stable state to another at a higher level accomplished using a limited supply of fuel.  For example, fossil fuels enable the transition from sustainable pre-industrial society to another more advanced sustainable society.  However, to realize this potential, society must transition to a sustainable energy supply since fossil fuels are dwindling. A major question is whether this global transition can be completed at the same time that global development continues to improve lifestyles and economic opportunities.   To help understand some of the complex relationships and challenges in this transition, a metaphor is developed of the evolving technological society as a rocket, which once launched, needs to reach a critical velocity and altitude before obtaining a sustainable orbit.  The basis for the metaphor is that there are two stationary locations for the rocket- the ground (pre-Industrial society) and a stable orbit (advanced technological society).  The rocket transitions between the two with technology to utilize a finite amount of fuel to overcome gravity and atmospheric friction to attain a speed, altitude, and orientation for a stable orbit.

The process of getting a rocket into orbit requires:

The metaphor is that society must generate enough technological progress to again generate sustainable energy (from solar or fusion sources). This transition from the sustainable preindustrial agricultural lifestyle to an advanced technological lifestyle is facilitated by the temporary use of exhaustible fossil fuels. It is not clear if society’s transition to energy sustainability (the metaphorical stable orbit) will be completed successfully.

These stages might correspond to historical periods of 1) Developing: the scientific & industrial revolution; 2) Launching: World War II; 3) Climbing: the Cold War and Oil Crisis; 4) Shifting: the current period of addressing entangled issues of climate change, demographic transition and energy transition; and 5)  Attaining: the increased use of renewable energy to sustain the process of global convergence.

The main metaphor is that just like a rocket, the society that advances with fossil fuel is initially on an unsustainable path.  After launching from the safety of the ground (leaving early agricultural sustainability), there is another sustainable situation – the orbit for the rocket and the use of technologically enhanced renewable energy for the society.  Both systems, rocket and civilization, have to reach the second stable situation before their limited amount of fuel runs out.  There are also many similar issues such as achieving stability, transitioning to new stages (phases), and the passing through the atmospheric friction (GHG release). 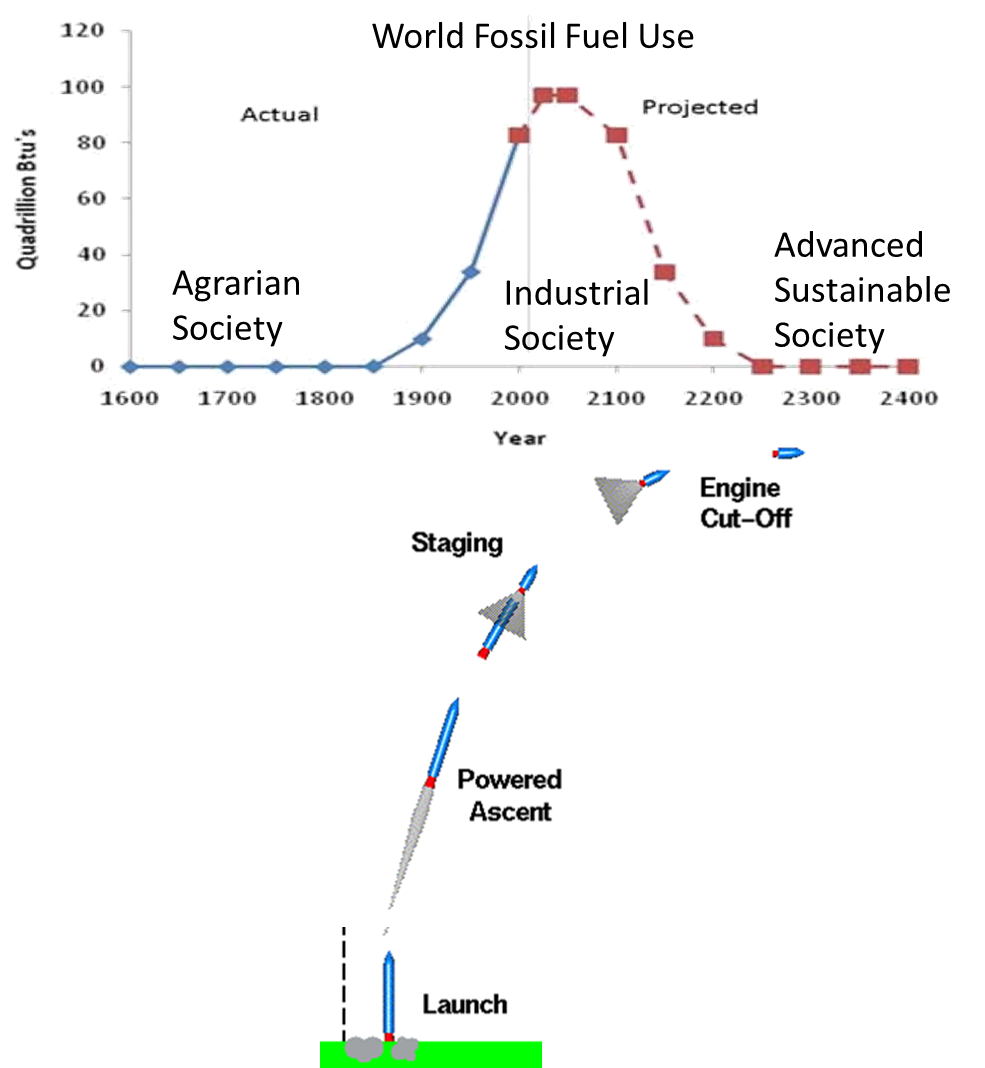 Figure  SEQ Figure \* ARABIC 1. Fuel use in both transition in transitioning society (top) from one sustainable economy (agrarian) to another (advanced sustainable) and in launching a rocket into orbit (bottom)

It should be noticed that there are important differences in the transitions of society and an actual rocket. Rockets are often multistage meaning that the lower parts of the rocket are jettisoned after the fuel has been exhausted.  This reduces the mass of the rocket to ease the work necessary to achieve the orbital velocity.  However, in contrast the transition to sustainability seems to occur as more of the world’s population joins a developed lifestyle with its increased demand for energy. In the metaphor, this could be viewed as adding mass to the rocket as it climbs, which then requires more work to obtain a stable orbit.

There are many modes of failure. A rocket launch can crash from loss of stability, fuel tank explosion, too slow acceleration leading to inefficient use of fuel, too much acceleration that damage the engines,.  The rocket might also heat up too much when going through the atmosphere or if the orbit is too low.  The rocket might not orient correctly for a stable orbit.  Another failure would be for the rocket to enter a stable orbit but lose the capability to support the crew.

Does this metaphor help in understanding the transition to energy sustainability?  What do you think?