Erin Richards
There are a few things that are a given when it comes to understanding the human body. Long periods of stress are bad. We all know this. Stress from relationships, work or other causes are bad for us. We get less sleep, eat worse and we get sick more often. We also know that exercise is good for us. This is also a given.

When we exercise, our hearts get stronger, our muscles get more efficient, our metabolism is balanced and we protect ourselves from complications like high cholesterol, high blood pressure, heart disease and diabetes. But these two assumptions are contradictory. When we imagine chronic stress it is always psychological stress, but that is not the only kind. Physical stress also triggers release of corticosteroids (our family of stress reducing hormones).

Stressed Out: Cortisol is released in the bloodstream as a response to stress. Prolonged periods of stress induce chronic cortisol release which can cause suppression of the immune system. Photo Credit: Missouri University of Science and Technology

The answer is not just a simple yes or no, and requires some careful evaluations. The immune system is made up of many types of cells and supporting systems, all which have complex relationships to other signals, such as hormones acting within the body.  Research tells us that regular moderate exercise is not only good for our muscles and hearts, but also for our immune systems. But can you have too much of a good thing and exercise to the point of immune suppression?

My sister is one of the most athletic people that I have ever met. She rejoices at a chance to do a “century ride” where she and a group of other likewise insane people take their bikes on Amtrak up to around Irvine, California and bike 100 miles back down to San Diego, CA. As someone who regards exercise as a necessary evil, it gets kind of irritating when she tries to get me to go on a “ short run” with her at 8:00 AM during Christmas vacation. To date, she has completed an Iron Man, a half Iron Man, a full marathon and countless other races, rides, swims and other combinations of the three.

Taking to heart the research on exercise (of which she does plenty), you would think that she would have the immune system of a brick wall, that nothing could possible make her sick. However, this is not the case, and more often than not, she is afflicted with some illness or another. Most noticeable is that she gets sick after a period of intense training. After completing her Iron Man, she immediately got sick and took weeks to recover. 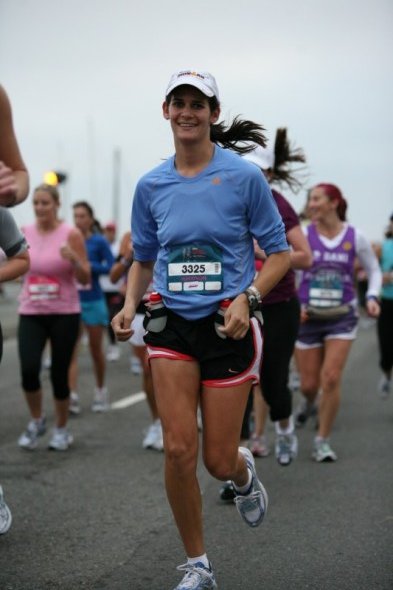 Work it out: This is a picture of my beloved sister, running in the 2008 San Fransisco Women's Marathon. She has an entire blog dedicated to her exercise. Photo credit: Rachel Richards

It is more and more likely, that she is not an isolated case, and demonstrates a clearer picture of the relationship between exercise, stress and immune system function.

In a study, published in the August issue of Medicine and Science in Sports and Exercise, 1995, Dr. J. Duncan MacDougall and colleagues at McMaster University in Ontario investigated this same phenomenon. They examine the effects of exercise training on the immune systems of long distances runners and uncovered some interesting results.

His study looked at immune system functions in response to increased training volume and/or intensity as separate variables as well as both immediate (acute) and long-term (chronic) stressors of the body. Results showed reductions in the ratio of immune helper cells to immune suppressor cells in both the increase of volume and intensity of exercise. This ratio is indicative of normal immune function, and its decreases shows a likewise depression of immune function. This means an increased risk of infection and illness due to immune suppression.

The study also found that increasing the intensity of the training suppressed immune function more than increasing the volume of exercise training. Another study, published in this month’s issue of Brain, Behavior and Immunity, lead by researchers at University of South Carolina’s Arnold School of Public Health showed that stress from exercise causes an increased risk for developing upper respiratory tract infections, while moderate exercise, causing less stress on the body, decreases the risk of developing such infections.

Their results demonstrate that stress from exercise caused increased vulnerability to infections from HSV-1 viral respiratory infections as well as from certain strains influenza viruses.

However, even though significantly suppressed, the immune system showed a rapid adaption to the increased training. MacDougall also found that the immune systems of his patients were modulated and adapted to the added stressors during the rest of the 10 day training period. Immune systems were shown to recover back to normal rates by the next day following a workout. This suggests that you are most susceptible to contracting an illness due to incomplete immune protection in the hours following a hard workout, but that your immune system will recover quickly to the added stress.

But what about long term exercise? Can our immune systems recover as quickly after a marathon or a 14 hour Iron Man? According to a study done by David Neiman, PhD. and colleagues at Loma Linda University, some elements of our immune system may take longer to recover.

Examining 2,000 runners after completion of the Los Angeles marathon demonstrated that immune systems may be suppressed enough to significantly increase our chances of contracting infections and developing illnesses. The study found that 13% of the runners who participated in the marathon developed an illness in the following week. The combination of increased volume and intensity of the exercise left an significant impact on the participants and as a result, many of them contracted infections as a consequence of impaired immune function.

Neiman suggests that over-exercising, which is 90-plus minutes/day or running upwards of 60 miles/week can increase vulnerability to illness. His study shows that marathon runners are six times more likely to become ill after a race due to excessive exercise impairing their natural immune function.

Resistance: Studies show that the body resistance to stress can only be maintained for a period of time before it has serious negative consequences for the body.  Long term stress can lead to impaired immune function for longer periods. Photo credit: Missouri University of Science and Technology

So what does this all mean? Exercise is not only good for us, but is absolutely essential to maintain a healthy lifestyle. For those of us that wish to get in shape, moderate daily exercise will give the most benefit and cause us the least amount of cost. Since the increase of volume or intensity will suppress immune function the most, aim for gradual increases in exercise training and your immune system will adapt quickly enough to avoid most illnesses.

As for those budding or seasoned marathon runners and triathletes, intense exercise training is part of your lifestyle, so paying attention to other aspects of life which can cause illness are key. Getting enough sleep, eating healthy and avoiding other forms of stress can bypass other avenues of contracting sickness. Allowing enough time for recovery and care in avoiding injury are also essential to continue a strenuous exercise regimen.

Like a double edged sword, exercise can be our greatest protection against a host of illnesses and infections, but if over-done, we can leave ourselves defenseless from invaders normally caught by our immune systems. So get out there and work up a sweat and feel the burn, just don't overdo it.

Segerstrom and Miller, 2004. Psychological Stress and the Human Immune System: A Meta-Analytic Study of 30 Years of Inquiry Psychological Bulletin, 130, 4.